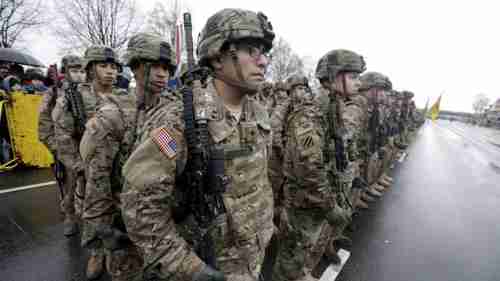 Starting in February 2017, the US military will deploy three fully manned US combat brigades in eastern Europe, near the border with Russia. Each brigade has about 4,500 soldiers, bringing with them military vehicles and other equipment. The deployment is in response to “an aggressive Russia.”

In recent years, Russia has invaded Georgia and Ukraine, and occupied and annexed Ukraine’s Crimea peninsula, all without invitation or UN Security Council approval.

Because of those actions, Russia’s Deputy Defense Minister Anatoly Antonov lacked credibility when he said:

Stories are being spread that Russia will send its tanks into the Baltic states, into Sofia or into Budapest. No one intends to do that. There are no such plans, nothing. Russia does not want war. The very idea of it is ridiculous.

The new deployment is meant to calm fears of eastern European nations, some of whom fear that they will be Russia’s next target. AP and BBC and Reuters

Libya’s Government of National Accord sails into port of Tripoli

This is another one of those bizarre stories that are so common in today’s Bizarro world.

On Wednesday, Libya’s Government of National Accord (GNA) arrived in Tripoli, the capital city of Libya. The government was created by Libya Dialogue, a UN-managed body. The prime minister of the GNA is Fayez Sarraj. He has appointed a 32-member cabinet. The government has been headquartered in a hotel in Tunis, the capital of Tunisia, which is right next door.

The existing government in Tripoli has warned Sarraj not to set foot in Libya, or he would be arrested. The Tripoli government even shut down the airport to prevent Sarraj from flying into Tripoli, but Sarraj and seven of his ministers arrived by boat on Wednesday at the port in Tripoli, ready to take over and start governing.

When the 2011 Western military intervention occurred, Libya’s long-time dictator Muammar Gaddafi predicted that once he was gone there would be chaos, which is certainly true. There has been a lot of retrospective criticism of that intervention, based on revisionist history. What most people have forgotten was that Libya was already in total chaos from the “Arab Spring,” as I described recently in “5-Mar-16 World View — A look back at Libya in 2011 as the West debates another military intervention”.

Today there are nearly 2,000 militias running different parts of Libya. There are also two major “national” governments, as well as two major jihadist groups, one al-Qaeda based and one ISIS-based.

The major players are:

So this is the situation into which Fayez Sarraj and the the seven ministers of his Government of National Accord (GNA) sailed on Wednesday.

According to Martin Kobler, the United Nations special representative to Libya:

I commend the courage, determination and leadership of the Presidency Council under its president Fayez Serraj in moving forward with the implementation of the Libyan political agreement and the aspiration of the overwhelming majority of the Libyan people. The international community stands firmly behind them and is ready to provide the required support and assistance.

As we reported yesterday, Europeans expect hundreds of thousands of migrants from Libya. Some European governments would like to mount a military operation to enter Libya to remove ISIS and find a solution to the migrant problem. However, Western governments do not want to attempt such an operation without either a UN Security Council resolution, opposed by Russia, or an invitation by the Libyan “government,” and the latter requires getting the Government of National Accord accepted by everyone, something that currently does not appear to be likely. Al Jazeera and BBC (11-Jan) and United Nations and AFP