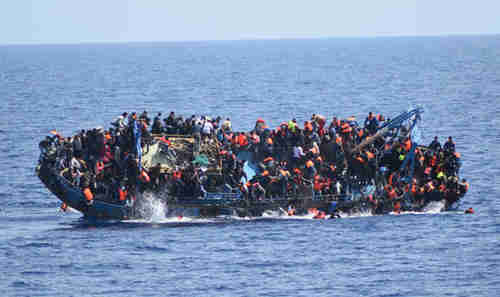 Human rights activists are describing as “catastrophic” the situation that 700-900 migrants drowned in the last week, attempting to cross the Mediterranean Sea from Libya to Italy.

However, some 13,000 to 14,000 were rescued in the last week. These numbers are similar to those from 2015. The numbers are expected to increase over the summer, as there are some 800,000 migrants in Libya waiting to cross. Almost all the migrants are coming from black African countries, including Nigeria, Egypt, Eritrea and Sudan.

Earlier predictions that there would be a flood of refugees from Syria, since the Aegean Sea route has been closed by the EU-Turkey refugee deal, have not been realized so far. The Libya route is many times more dangerous than the Aegean Sea route, and it is possible that many Syrian refugees are waiting to see if the EU-Turkey deal will fall apart, which could very well happen soon. The Local (Italy) and Eagle Online (Nigeria) and Express (London)

Turkey’s president Erdogan tells Muslims not to use birth control

Turkey’s president Recep Tayyip Erdogan has once again expressed his support for procreation, saying that no Muslim family should ever consider birth control or population planning.

We will multiply our descendants. They talk about population planning, birth control. No Muslim family can have such an approach. Nobody can interfere in God’s work. The first duty here belongs to mothers. […]

I am saying this clearly, we will increase our posterity and reproduce generations. As for population planning or birth control, no Muslim family can engage in such a mentality. We will follow the road that my God and dear Prophet [Muhammad] say.

Erdogan’s remarks were heavily criticized by women’s groups for telling women how many children to have and dismissing the Western idea of gender equality. Hurriyet (Ankara) and Gulf Times (Doha)

Ever since I learned, years ago, that Muslims had the greatest birth rate of all religions, I’ve been trying to find out why.

According to Pew Research, this trend will continue for decades into the future. According to Pew, from 2010-2050 population size is expected to increase 73% for Muslims, 35% for Christians, 34% for Hindus, and 16% for Jews, with the overall growth rate of 35%.

However, those figures assume that there will not be a new world war. As we described yesterday, the world is already bulging with people, food is becoming more expensive, and refugees are pouring out of Asia, the Mideast and Africa. This becomes more unstable every day, as does global finance, with huge interlocking debts in a giant credit bubble.

However, Muslims have been the fastest growing religion since the end of World War II. Furthermore, when I researched this in the past, I noticed that this applied to Sunni Muslim countries to but not to Iran, a Shia Muslim country. So I reached the obvious conclusion that this phenomenon applies not to Muslims in general, but only to Sunni Muslims.

My theory has always been that after the devastating destruction of Turkey’s Ottoman Empire, which had ruled the Muslim world since the 1400s, Sunni Muslims developed either explicit or implicit communal sense that the way to get the Ottoman Empire back was to have as many children as possible.

I’ve asked any number of Muslims and Muslim scholars whether this theory makes sense, whether there was some kind of fatwa issued by some cleric in the 1920s or 1930s, telling Muslims to have as many children as possible to recover from the destruction of the Ottoman Empire. No one I spoke to supported this theory, and many explicitly denied it, although were also surprised to learn the statistics that Sunni Muslim populations have been the fastest growing populations, something of which they had been unaware.

There is no prohibition against contraception in Islam. Abortion and hysterectomies are prohibited, but ordinary contraceptive methods are acceptable, including the IUD and the pill. In fact, the Catholic religion is far more restrictive about contraception than Islam is. So Erdogan’s claims about birth control appear to be exaggerated.

But here we have Turkey’s super-authoritarian president Recep Tayyip Erdogan, who gives every sign of wanting to reconstitute the old Ottoman Empire, saying that women should avoid contraception, have as many children as possible, “multiply our descendants.”

So I’m sticking to my theory. The reason for the high birth rate among Sunni Muslims after World War II is because of of an explicit or implicit communal sense that the way to get the Ottoman Empire back was to have as many children as possible.

From the point of view of Generational Dynamics, Erdogan’s exhortation is just one more crazy idea, of which there are many, from just one more crazy politician, of which there are many. The Mideast is headed for a massive sectarian war, and Turkey will be at war with Iran, Russia and several Western countries, at the very least. As I wrote yesterday, those wonderful children will all be cannon fodder, and archeologists of the future will enjoy digging up their bones from mass graves. Pew Research and Islamic Edicts on Family Planning