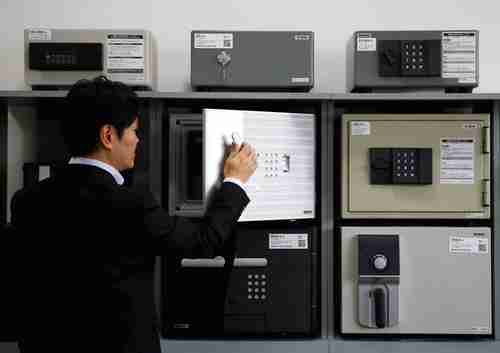 Man shops for vault in which to store cash

As I wrote last week, central banks around the world are committed to “printing money” and making it available to wealthy investors and institutions in order to forestall forced selling following global financial shocks following Brexit. A major tool for doing this is quantitative easing — purchasing corporate or sovereign bonds. But central banks are being limited by the huge amount of debt based on negative interest rates (yields). ( “25-Jun-16 World View — Fallout from Brexit: Impact on geopolitics, economics, and stock markets”)

A new report by Finch Ratings indicates that negative interest rates are spreading rapidly. As of June 27, $11.7 trillion of sovereign debt globally was based on the purchase of bonds and other assets with negative yields. This is up by $1.3 trillion from the end of May.

The way that this works in “normal” times is that an investor pays $95 for a bond that will pay $100 when it expires. But in today’s “new normal,” the demand for bonds is surging, and by the law of supply and demand, the prices of these bonds are also surging. So the investor is forced to pay $105 for the same bond that will pay only $100. That is a negative yield.

The demand for bonds has been surging from two sources. As volatility and uncertainty increases, investors are seeking safe havens in which to park their money. And central banks are purchasing bonds as part of a quantitative easing program. Japan, Germany and France were the leaders in June of increases in sovereign debt with negative yields.

For financial institutions looking for a place to park their money, some of them are returning to the old days when banks stored their money in vaults. Money in a vault earns no interest, but it also does not lose value.

When American outlaw “Willie” Sutton was once asked why he robbed banks, he replied, “I rob banks because that’s where the money is.” Somewhere there may be a modern day Willie Sutton who’s thinking the same thing. Fitch Ratings and Bloomberg and Seeking Alpha and Bloomberg and FT Adviser and Telegraph (London)

Today’s meeting was “about us,” according to one EU official, not about the UK. So 27 European Union members met for an EU summit, the first one in 40 years from which Britain was excluded.

The key phrase was “there will be no single market à la carte.” The meaning of this phrase was stated repeatedly by different EU officials. If the UK wants access to the EU Single Market, then they must also be willing to guarantee the EU’s four freedoms: freedom of movement for people, goods, capital and services.

The Muslim Brotherhood (MB), and the countries that sponsor MB — Qatar and Turkey — have reacted furiously to the actions on June 18 by an Egyptian court to sentence former president Mohamed Morsi to 40 years in prison for conspiring to harm Egypt’s national interests in what has been called the “spying for Qatar” affair. Morsi’s co-defendants included a reporter from Qatar-based al-Jazeera.

The judge reading out the verdict said that Morsi and his co-defendants endangered national security, which is “worse than killing a person or opposing God’s laws.” He added:

They are more dangerous than spies. Spies are usually foreigners, but unfortunately the defendants are Egyptian.

Qatar denounced the verdicts, saying they set a dangerous precedent in relations between Arab nations:

The verdict issued by the Cairo Criminal Court is baseless and goes against justice and the realities on the ground, because it includes a litany of misleading claims that contradicts the policy of the State of Qatar towards all its sisterly nations.

The sentence in the case of the spying [for Qatar] sends a message no only to the MB but also a special message [meant] to reach the Qatari Emir. The message to the MB is that the [Egyptian] state will not stop pursuing the movement and is not interested in holding talks [with it] or reassessing its attitude towards ‘the state of the [MB] General Guide.’ […]

I believe this affair means Qatar has become an ‘enemy state’ and can no longer be a sister country, [since] siblings do not spy on each other. I am speaking of the rash [Qatari] leadership. This leadership managed to deceive a foolish president [Morsi] in order to receive [from him] documents [pertaining to] national security. He who sells out his homeland sells out his good name and his honor.

As long-time readers know, Generational Dynamics predicts that, in the approaching Clash of Civilizations world war, Iran, India and Russia will be allied with the West against China, Pakistan, and the Sunni Arab nations. ( “15-Jul-15 World View — Arab views of Iran nuclear deal”)

However, that is very broad prediction. It is clear that the Sunni Arab nations are not monolithic, and historically they have fought against each other, as well as against Shia Iran. The 2014 Gaza war revealed sharp fault lines among the Sunni Arabs, with Egypt, Saudi Arabia and the West Bank Palestinians on one side, and Hamas, Qatar and (non-Arab) Turkey on the other side. ( “3-Sep-14 World View — Mideast realignment continues following the Gaza war”) It would be possible through analysis and interviews to produce a much more detailed and accurate prediction of the expected activities of the different ethnic groups, but this would require more resources than are available to me. However, this could be a good project for a college student thesis. Daily News Egypt (18-Jun) and Al-Jazeera (Qatar – 18-Jun) and Memri