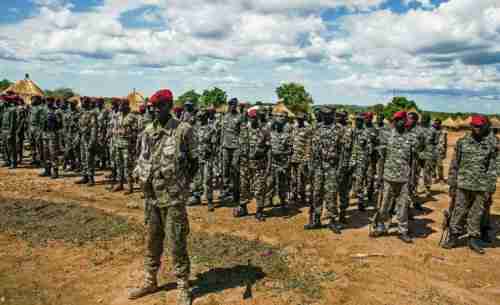 Fresh clashes have broken out between rival forces from the Dinka and Nuer tribes in South Sudan in the last few days, killing hundreds of civilians and forcing thousands from their homes. Although low-level violence has been a constant since South Sudan became independent in 2011, there were major clashes that began in December 2013. ( “29-Dec-2013 World View — Conflicts grow in South Sudan and Central African Republic”) There followed 21 months of atrocities, until they were supposedly ended by a peace treaty that was signed by both sides in August 2015.

New reports indicate that several Nuer armies are now heading towards the capital city Juba, and there are fears of a wider war. The United Nations said it was “outraged” at what was happening:

The United Nations Mission in South Sudan (UNMISS) is outraged at the resumption of violence in Juba today […], which is severely impacting on the civilian population.

According to UNMISS, there is heavy fighting in downtown Juba. Other reports indicate the use of artillery, warplanes, and helicopter gunships. The UN Security Council on Saturday passed a resolution strongly condemning the fighting in Juba.

After the 2011 war that gave South Sudan independence from Sudan, a Transitional Government of National Unity was formed. The president is President Salva Kiir, from the Dinka tribe, and the vice president is Riek Machar, from the Nuer tribe. Both tribes had been united in facing a common enemy in their fight for independence from Sudan, but they turned on each other and started an ethnic conflict after the war.

The clashes in December 2013 were triggered when Dinka president Salva Kiir fired his cabinet and accused the Nuer vice-president Riek Machar of planning a coup. Machar fled the country, and the fighting displaced more than 2.2 million people before the August 2015 peace agreement was signed.

In April 2016, Machar returned to South Sudan to rejoin the Unity Government as vice president. However, Machar’s spokesman is now saying the South Sudan is “back to war.” Radio Tamazuj (South Sudan) and BBC and Al Jazeera

When Sudan became independent in 1956, the north was largely Muslim, Arabic speaking, while the southern population mostly followed tribal religions. The Khartoum government in the north launched a program to “Arabize and Islamize the South.” This triggered a reaction from Christian evangelists, mostly from the US, to come to Sudan and convert the South to Christianity.

There was immediately a north-south war of independence, but there was also a generational crisis civil war between the Nuer and Dinka tribes. This was climaxed on November 15, 1991, when the “Bor Massacre” began. Over the next three months, 2,000 civilians were killed, thousands more wounded, at least 100,000 people fled the area. Famine followed the massacre, as looters burnt villages and raided cattle, resulting in the deaths of 25,000 more from starvation.

The nightmare scenario is that the new clashes will spiral into a repeat of the 1991 Bor Massacre. But from the point of view of Generational Dynamics, South Sudan is in a generational Awakening era, so a historic massacre of this type will not occur.

However, there certainly is a great deal of ethnic hatred between the Nuers and the Dinkas. Evidently, the level of ethnic hatred exceeds that of the Hutus and the Tutsis in Rwanda, following their 1994 genocidal ethnic bloodbath. Nonetheless, in this generational Awakening era, we can expect to see repeated clashes between Nuers and Dinkas, separated by peace agreements that fall apart in a few weeks or months. But a full-scale ethnic civil war is not expected at this time. Radio Tamazuj (South Sudan 23-Dec-2013) and Sudan Tribune (31-Aug-2007) and BBC (28-Sep-2015) and ECC Platform (2014)