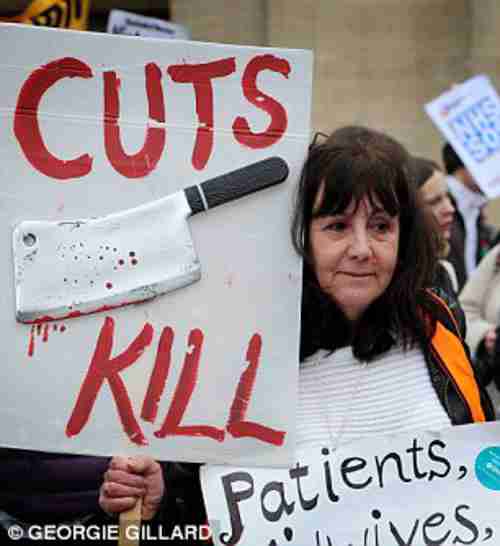 The system is deeply corrupt, with doctors falsifying records, claiming for work that was never done, or putting in for bogus overtime. Dentistry services are so bad that people are buying “do-it-yourself (DIY) dentistry kits” to take care of their whole families, as was done centuries ago.

Because the NHS bureaucracy is so old and bloated, and because the services are “free,” costs can only be controlled by rationing, queuing, reduced quality and artificial cost suppression. UK’s doctors earn far less than doctors in other countries, and UK specialists earn about half of what they do in America. As a result, UK’s homegrown doctors have left to work in other countries, and NHS has had to import 28% of its doctors from abroad, usually from poorer countries where low UK salaries look attractive.

General practitioner (GP) appointments are limited to 10 minutes, requiring some doctors see up the 60 patients in a 10-hour day. And yet, NHS commissioners are planning to cut GPs by 1/3 in the next ten years, and cut GP appointments by 24%. GPs will be replaced with cheaper, easier-to-train physician associates, nurses and pharmacists.

At the same time, population is rising and aging, as new people are born and old people are getting older. In East London, for example, where population is rising rapidly, the plan is to cut 136 GPs by 2020, and replace them with 58 more pharmacists, 25 more physician associates, and 49 more nurses. That is, 136 high-cost doctors will be replaced by 132 much cheaper people. In addition, a number of hospitals are slated for closure.

Many analysts believe that NHS commissioners are either in denial about trying to save NHS, or a lying to the public. According to Helen McKenna, a senior policy adviser:

Politicians need to be honest with the public about what the NHS can offer with the funding allocated to it.

It is no longer credible to argue that the NHS can continue to meet increasing demand for services, deliver current standards of care and stay within its budget. This is widely understood within the NHS and now needs to be debated with the public.

There are no easy choices, but it would be disastrous to adopt a mindset that fails to acknowledge the serious state of the NHS in England today.

In other words, UK’s National Health Service is in a death spiral, and no one wants to say so. Chronicle Live (Newcastle upon Tyne, UK) and Guardian (London) and BBC (11-Jul) and GP Online (UK)

The British Medical Association (BMA), the labor union representing doctors in the UK’s National Health Service (NHS), will stage an England-wide 5-day strike for the week of September 12-16.

The walkout will be devastating for patients. About 100,000 operations and one million hospital appointments will be postponed.

One patient, Simon Emmet, quoted by the BBC has a kidney stone and is waiting for surgery. The surgery was scheduled for four weeks (it would have been less than one week in the US), but with the strike, he expects it to be delayed.

I can’t see that the strikes won’t delay my surgery. There are only two people at the hospital that can carry it out, meaning I already have a four-week waiting time.

I’ve been to A&E [emergency room] with abdominal pain twice in the last week. I constantly feel nauseous and I’m in constant pain. I have to take very strong painkillers which make me drowsy.

I work from home as an IT consultant and I have to balance taking enough painkillers so I can work through the pain but no so many that I’m too dopey to work. Often I end each day in so much pain that I just lie on the floor waiting for the next day’s work.

I’d really like to believe the doctors have the patient’s best interest at heart but it doesn’t seem right. They’ve been arguing about this for three years.

The labor dispute is centered on overtime work on evenings and weekends, which is usually assigned to the “junior doctors.” Since the NHS is facing economic disaster, there was no money available for large increases in pay that the BMA demanded. So, the government offered a contract that would pay more to doctors that do a lot of work on weekends, and would pay less to other doctors.

The BMA recommended that its membership accept the revised contract, but the membership rejected it in July by a vote of 58% to 42%.

The BMA announced on Wednesday that junior doctors will strike from September 12-16. The BMA is scheduling additional walkouts for October 5-7 and 10-11, November 14-18, and December 5-9. WebMD (UK) and BBC and Guardian (London)

I saw Mark Bertolini, the CEO of health insurer Aetna, on television numerous times in the last few years. He always expressed concerns about Obamacare, but repeatedly said that he was going to make it work, and he expected Aetna’s Obamacare insurance to break even in 2016, or in 2017 at the latest. As late as spring of this year, he announced plans for Aetna to expand Obamacare coverage of 2017.

On August 15, Aetna announced major cutbacks in Obamacare coverage. I saw Bertolini on CNBC that morning, and he was asked why things had changed since the spring. He said, “Losing $200 million in the second quarter really focuses my mind.”

Even worse, Pinal County in Arizona will have absolutely no Obamacare plans to purchase. That means that 10,000 families in that country will lose their health insurance at the end of 2016, with nowhere else to go. The average proposed premium rate increase among all insurers for 2017 plans in Arizona tops 65%.

Let’s review how we got here.

As long time readers are well aware, in July, 2009, when Obamacare was first announced, I wrote that Obama’s health plan is a proposal of economic insanity. I compared it to President Richard Nixon’s wage-price controls, and I predicted that it would just as much an economic disaster as Nixon’s price controls.

Nixon’s price controls were the typical plan that loony left loves – use government regulations to keep prices low, at a time when inflation was at 4%. It’s a great idea, and one that “progressive” and left-wing politicians absolutely adore, because they are low IQ’s and limited mental capacities make them incapable of understanding that giving things away for free only creates economic disaster, as it always has in history. Nixon was forced to repeal the price controls because there were huge shortages of many things, and inflation was skyrocketing to 12%.

We have recently been seeing the same thing happen in Venezuela, in a more extreme form. Citizens have to queue for hours to get basics like milk, rice, flour, ketchup, diapers, and toilet paper. Crime and violence are becoming rampant. 75% of Venezuelan homes now live in poverty, compared to 27% just two years ago. The inflation rate was 275% in 2015, and still surging. The government has ordered the jailing of factory owners if their factories cannot produce products as ordered.

So now the same thing is happening with Obamacare. President Obama has been able to stall for years by stealing billions of dollars in funds meant for other purposes. We haven’t yet seen President Obama order the jailing of insurance company CEOs for withdrawing from Obamacare. But this is an administration that earlier this year threatened to use RICO racketeering laws to prosecute organizations, corporations, and individual scientists who are climate change deniers. As Obamacare spirals into disaster, anything is possible.

And as always at times like this, I like to remind readers that Obamacare’s principal architect, MIT professor Jonathan Gruber, said that Obamacare passed because of “the stupidity of the American voter.” Gruber was talking about Obamacare supporters. Time and Business Wire – Aetna (15-August) and Fox News and Daily Signal (8-Aug)