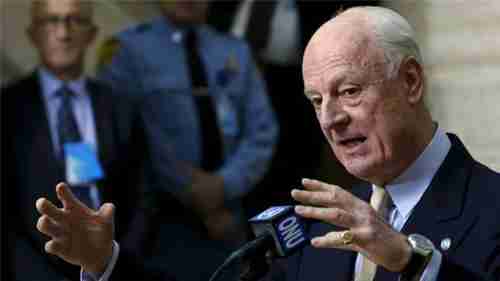 Staffan de Mistura, the United Nations envoy for Syria, gave a passionate speech on Thursday, where he practically begged both sides to stop the genocide going on in east Aleppo in Syria.

De Mistura’s point was that there are over 275,000 people in east Aleppo, but only about a thousand of them are members of Jabhat al-Nusra (al-Nusra Front) which recently renamed itself Jabhat Fateh al-Sham (JFS) when it cut its ties to al-Qaeda.

Can you please look at my eyes, and those of the Aleppo people. Of the 275,000 civilians that are there where you are, and confidently those 275,000 people that you’re going to stay there, and that you remain there and keep hostage of your refusal to leave the city, because 1,000 of you are deciding on the destiny of 275,000 civilians. I would like you to reply to this question — not to me, but to those 275,000 people — and if you did decide to leave, in dignity, and with your weapons, to Idlib or anywhere you wanted to go, I personally am ready physically to accompany you.

It is a very dramatic offer, but the probability that it will be taken up is pretty close to zero. Even if 1,000 fighters left the city, Syria and Russia would claim that there were still more “terrorists.” In the event that de Mistura played the part of a Pied Piper leading fighters out of Aleppo, it’s even possible that Russian and Syrian warplanes would target him and kill him, and then say that it was Nato warplanes that killed him. Reuters and Asharq Al-Awsat

UN envoy Staffan de Mistura renewed those accusations on Thursday by comparing the actions of Syria and Russia to the genocides at Srebrenica and Rwanda.

He said that, unless there’s a “game changer,” the city of Aleppo will by “totally destroyed” by Russia and Syria within 2 to 2 1/2 months, presumably killing most of the 275,000 residents, who are “civilians, not terrorists.”

There is only one thing that we are not ready to do – be passive, resignate ourselves to another Srebrenica, another Rwanda, which we are capable sadly today to recognize – written on that wall in front of us – unless something takes place.

Unless there is any major game changer that may change the equation, this cruel, constant use of military activities, bombing, fighting destruction in eastern Aleppo will continue. Let’s be honest, there is nothing that tells us that it will not continue. …

The bottom line is – in maximum 2 months, 2 1/2 months the city of eastern Aleppo at this rate may be totally destroyed. We’re talking about old city in particular. And thousands of Syrians – civilians, not terrorists — will be killed. And many of the wounded. And thousands and thousands of them may try to become refugees in order to escape from there.

This is what you, we, the world will be seeing when we will be trying to celebrate Christmas, or the end of the year, if this continues at this rate, unimpeded. Homs [Syrian city] multiplied by 50.

It is been very clear for a long time that the depraved psychopath Bashar al-Assad, the president of Syria, would very much like to see 275,000 residents of Aleppo killed, even though only all but a few thousand are innocent civilians. Syrian and Russian warplanes have been bombing hospitals, schools and civilian neighborhoods even in cities where al-Nusra was never present.

So de Mistura’s passionate plea has no possibility whatsoever of making a difference.