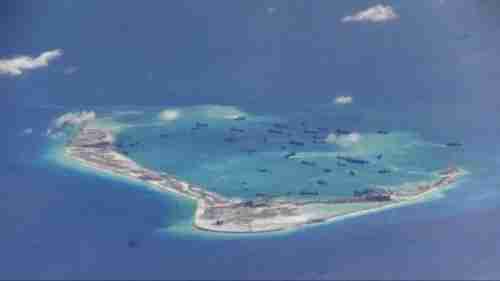 Chinese military activity around Mischief Reef in the Spratly Islands, May 21, 2015 (US Navy)

China has built artificial islands and military bases, annexing regions belonging to other countries, all in violation of international law, and specifically declared illegal by the United Nations Permanent Court of Arbitration (PCA) in the Hague last year, but that isn’t stopping China from continuing its massive illegal and dangerous military buildup in the South China Sea.

On Wednesday, reports emerged from unnamed US intelligence officials that China has built on its artificial islands more than twenty buildings designed to hold long-range surface-to-air missiles. The buildings are concrete structures with retractable roofs. The structures appear to be 20 meters (66 feet) long and 10 meters (33 feet) high.

When asked, China’s foreign ministry spokesman Geng Shuang evaded the issue by saying, “China carrying out normal construction activities on its own territory, including deploying necessary and appropriate territorial defense facilities, is a normal right under international law for sovereign nations.”

This week, China also announced that it will revise its 1984 Maritime Safety Law, with the purpose of barring selected foreign ships from passing through the South China Sea, which China claims. It’s believed that the changes are intended to target the United States.

Foreign ships that enter without approval will be fined 300,000-500,000 yuan ($43,706-72,844) and those violating Chinese laws will be expelled, presumably by means of military force. “China’s waters are open to foreign ships as long as they do not damage the waters’ safety, order, or China’s sovereignty,” according to a Chinese official.

These actions come as an American aircraft-carrier strike group led by USS Carl Vinson conducting “routine” naval and air operations in the South China Sea this week similar to activities that have been performed for years to protect freedom of navigation in the South China Sea, through which about $5 trillion worth of trade passes each year. However, China calls these operations a “threat to China.”

The two Chinese actions this week – installing long-range surface-to-air missiles and planning to military action targeting foreign ships in the South China Sea – bring the region and the world closer to war.

Chas Freeman, a former assistant secretary of defense, said that China’s apparent installation of long-range surface-to-air missiels is an “unfortunate, but not (an) unpredictable development,” and said that the purpose of these buildings is not to signal President Trump, as some journalists are suggesting:

There is a tendency here in Washington to imagine that it’s all about us, but we are not a claimant in the South China Sea. We are not going to challenge China’s possession of any of these land features in my judgment. If that’s going to happen, it’s going to be done by the Vietnamese, or… the Filipinos… or the Malaysians, who are the three counter-claimants of note.

The ASEAN ministers have been unanimous in their expression of concern about what they see as the militarization of the region. In so far as certain reclamation of certain features built on the South China Sea that had been completed, they (ASEAN ministers) have noticed, very unsettlingly, that China has installed weapons systems in these facilities that they have established.

The complaints by the Philippines are particularly telling because president Rodrigo R. Duterte last year made a very public spectacle of “throwing the United States” out of the Philippines and seeking to replace the US with China. As it’s turned out, Duterte has been unable to eject the US because of opposition within his own government, and because of anxiety over China’s increasingly hostile activities in the South China Sea.

The Philippine government is becoming particularly anxious over Scarborough Shoal, which has been a Philippine fishing ground for centuries. China has taken military control of the region around Scarborough Shoal but has not yet built an artificial island or military base there, as it has in the Spratly Islands. An attempt by China to build a military base in that region could generate a strong nationalist backlash in the Philippines, with unpredictable political results.

A military base on Scarborough Shoal would effectively sit on the doorstep of Subic, where US and Philippine forces are based. China could extend its intelligence, surveillance, and reconnaissance capabilities into the eastern reaches of the South China Sea by placing an over-the-horizon radar system at Scarborough as it has done on some of its possessions in the Spratlys. The shoal also commands the northeast exit of the sea, so a Chinese military outpost there could stop other countries’ navies from traveling through the South China Sea.

Vietnam is well aware that its military stands little or no chance in a naval battle versus China, having already lost a naval battle to China in 1988. Vietnam has been adopting an asymmetric strategy of sea-denial. This strategy uses missiles and submarines to deny China access to the same South China Sea regions where China is denying access to the Vietnamese.

Vietnam has just received a fleet or Russian-build diesel-electric submarines, equipped for sea denial in the traditional sense with torpedoes and mines, as well as Russian-made Klub-S sea-launched land-attack cruise missiles (SLCM) that can hit targets as far away as three hundred kilometers.

India is in talks with Vietnam to sell them short-range surface-to-air missiles. Nearly half of India’s trade passes through the South China Sea, and its government is taking steps to maintain freedom of navigation and overflight.

Increasingly, we’ve been seeing an alliance among several countries – India, Vietnam, Philippines, Japan, and Russia – to take steps to guarantee that the South China Sea remains open to everyone.

The populations of China and all of these countries today are in a highly emotional, nationalistic state, and this military buildup on all sides cannot end up in any way but a major war.