The Venezuelan opposition called for a second “mother of all marches” on Thursday from the same 26 rally points from which hundreds of thousands took the streets to demand an end to socialism on Wednesday.

The call for more protests follows the deaths of three on Wednesday – teen student Carlos José Moreno, 24-year-old protester Paola Ramírez, and an unnamed Bolivarian National Guard (GNB) soldier – and vows from the ruling socialist party that peaceful dissidents will pay for defying the government.

According to Reuters, several thousand had congregated once again by Thursday midday in the nation’s capital and once again were met with tear gas attacks by GNB officers. 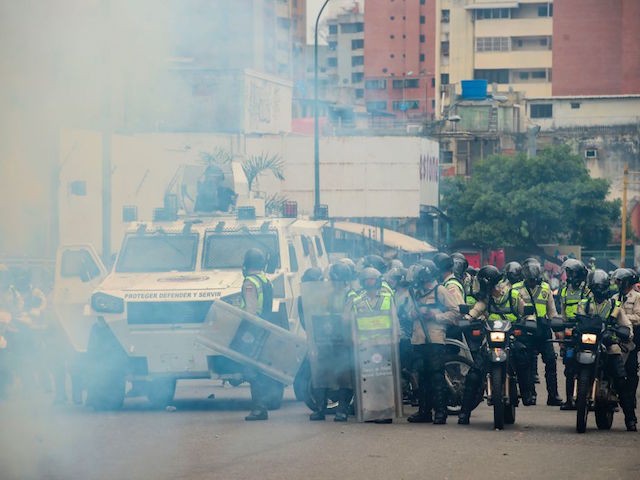 According to opposition leaders, at least six community organizers belonging to the First Justice party have been detained, their whereabouts unknown. In western Táchira state, at least one journalist, identified as Katherine Torres, has reported being attacked and robbed by local police.

“We call all citizens once again to combat the ‘Zamora plan,’ we are not afraid,” opposition leader Henrique Capriles Radonski said on Thursday, referring to a military plan launched by dictator Nicolás Maduro to silence the opposition. “We will not rest until Venezuela returns to constitutional order. Caracas belongs to Caracans, just as Venezuela belongs to Venezuelans and we will keep fighting for her.”

In a video posted on his Twitter account, Capriles decried the “savage repression” of Venezuelan police under Maduro and lamented the loss of a GNB life, noting, “for us the life of a Venezuelan has no political stripe, unlike the government, which only speaks of victims related to them.”

On Wednesday, Maduro addressed the nation to condemn the protests against him at a counter-rally organized by the government. “Julio Borges, you are responsible for the violence,” Maduro said, addressing the president of the National Assembly, an opposition leader. “Don’t complain later when justice gets you.”

Maduro also treated the crowd to a line dance along with some of his highest-ranking officials.

Protests erupted last month following the Supreme Court’s attempt to assert itself as the legislative body of Venezuela, annulling the authority of the opposition-controlled National Assembly. The court overturned that ruling, but not previous rulings that had stripped the National Assembly of its powers. Maduro’s government also banned Capriles, the governor of Miranda state, from running for office for fifteen years. Capriles staged two presidential campaigns against Maduro, the latter widely considered to have been successful had Maduro committed fraud.

The U.S. State Department has issued a statement in response to the deaths yesterday and ensuing protests, urging the government of Maduro to cease using violence and overriding the constitution. “We are concerned that the government of Maduro is violating its own constitution and is not allowing the opposition to… organize in a way that expresses the views of the Venezuelan people,” Secretary of State Rex Tillerson said during a press conference Wednesday. “We are concerned about that situation. We’re watching it closely and working with others… to communicate those concerns.”