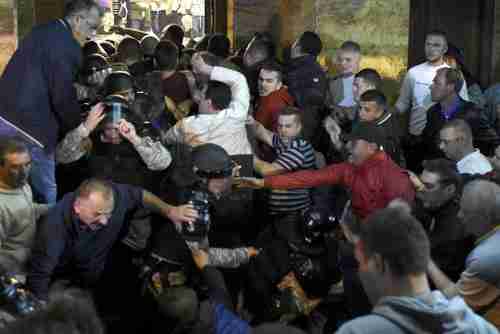 Protesters clash with police blocking the entrance to the parliament building in Skopje, Macedonia, on Thursday evening (AFP)

On Thursday evening, thousands of ethnic Macedonians surrounded Macedonia’s parliament building in the capital city Skopje, and then stormed the building. The protests were triggered when an ethnic Albanian was controversially elected to the post of parliament speaker. The scene was calm by Friday morning, with reports indicating that about 100 people have been injured and in hospitals.

The Macedonians are protesting unending government corruption, as well as demands by Albanian nationalists for a “Greater Albania,” an enlargement of the current Albania to include ethnic Albanian populations for neighboring countries.

The idea of a Greater Albania was launched in the late 1800s, and was favored by Nazi Germany and Italy’s Fascist dictator Benito Mussolini during World War II. It was revived during the brief Macedonian civil war in 2001, and is pursued by Albanian nationalists. Many people consider the Albanian nationalist movement to be a danger to the entire region, because it might ignite further wars.

Other analysts see no fear of war, and several politicians are blaming the whole incident on the United States and the European Union for meddling. Reuters and Macedonia Online and B92 (Belgrade)

The most famous leader in Macedonia’s history is Alexander the Great, considered by many to be the most brilliant military leader of all time. He was born in 356 BC, and became King of Macedonia upon his father’s death in 336 BC. He created a vast empire from Greece to Egypt to Persia to India by the time of his death in 323 BC.

Upon his death, Macedonia and his entire empire were thrown into a succession of violent upheavals. For centuries, Macedonia was important because it controlled the major trading and transportation routes through the Balkans.

Macedonia was part of the Ottoman Empire from 1371 to 1912. The Balkan Wars of 1912-13 were a generational crisis war for Macedonia, resulting in the country parts of the country under the control of Greece and Serbia.

From the point of view of generational theory, Macedonia is a country that is very difficult to analyze because a constant stream of invasions by neighboring country leave it with no unique history timeline. Macedonia is landlocked, surrounded by Greece, Bulgaria, Serbia and Albania, and all of these countries have, at one time or another, invaded and controlled Macedonia.

However, when viewed as a part of the Balkans as a whole, its generational timeline becomes clearer. The Balkan wars of 1912-13 were a crisis war that threw the country into decades of chaos, until it was brought under control by the brutal, bloody dictatorship of Marshall Josip Broz Tito starting in 1953, as a Communist satellite of the Soviet Union.

Tito’s death in 1980 coincided with the beginning of generational Crisis era for the Balkan countries, roughly 60 years after the end of World War I. The coalitions that Tito had held together with bloody force began to disintegrate, and in 1991, new Balkan wars began as generational crisis wars. The Bosnia war in particular, ending in 1995, was one of the bloodiest and most brutal wars of recent times.

In 2015, the ‘Balkan Route’ for refugees leaving Greece began with Macedonia

Macedonia has been in the news in recent times for other reasons that are worth summarizing now:

History World and History of Macedonia and NBC News

In the course of researching this article, I came across the Heidelberg Conflict Barometer, from the Heidelberg Institute for International Conflict Research, which is one of the most complete listings and analyses of conflicts going on in the world today. It identifies 18 different disputes currently in the Balkans.

This study is invaluable for anyone analyzing the world’s conflicts today. What the study lacks is any attempt to relate the conflicts to generational timelines. Any college student interested in these subjects could make an invaluable contribution to understanding what’s going on in the world today by taking on, as a thesis topic, the problem of relating all today’s conflicts to generational timelines. RFE/RL and Heidelberg Conflict Barometer 2016