European Union lays out demands for Britain over Brexit negotiations 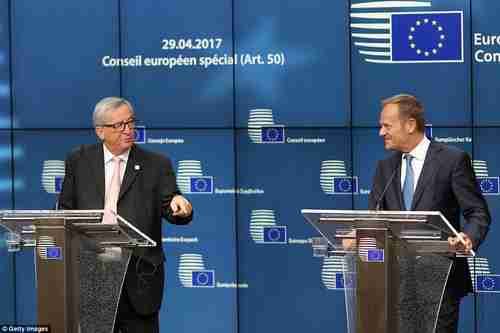 The leaders of the EU-27, the 27 member nations of the European Union not including Britain, laid out their negotiating demands for the United Kingdom at a meeting in Brussels on Saturday.

The UK passed the Brexit referendum, calling for Britain to leave the European Union, on June 23 of last year. On March 29 of this year, Britain’s prime minister Theresa May invoked Article 50 of the Lisbon Treaty, making the Brexit process irreversible, and triggering a two-year period of negotiations before the exit is final. Theresa May has called for new elections on June 8, and so serious negotiations are expected to begin at that time.

Britain would like to immediately start negotiating a trade deal, but the EU leaders on Saturday said that trade could not be discussed at all until the terms of the “divorce” had been resolved. In particular, the EU-27 is demanding that three questions be resolved first:

We have already prepared a text that could be adopted immediately if our British friends would be willing to sign it, but that probably won’t happen. I have the impression sometimes that our British friends, not all of them, do underestimate the technical difficulties we have to face… Privately everything went well but we have a problem, the British want to leave the EU and it’s not feasible that it can be done just like that.

The single question of citizens’ rights is in fact a cortège of 25 questions that have to be solved.

I would like to state very clearly that we need real guarantees for our people who live, work and study in the UK and the same goes for the Brits. The commission has prepared a full list of the rights and benefits that we want to guarantee for those affected by Brexit. To achieve sufficient progress we need a serious British response.

As an aside, I chuckled at Jüncker’s use of the word “cortège.” Jüncker was undoubtedly referring to some (unpublished) list of 25 questions, but the word “cortège” is a French word usually used in the context of a funeral procession, which perhaps Jüncker was afraid was happening.

According to the guidelines, negotiations on trade and other issues cannot begin until the three issues listed above have been resolved. BBC and Daily Mail (London) and EU Negotiation Guidelines

Sharp disagreements ahead over the 60 billion euro Brexit ‘divorce settlement’

Britain’s prime minister Theresa May rejected some of the hardline demands that were put forth at Saturday’s meeting in Brussels. She said that she was sticking to her own demands outlined in a speech earlier this year which included tariff-free trade, ending the jurisdiction of European courts and stopping free movement of migrants.

One of the most difficult demands will be the Brexit “divorce settlement,” the demand that Britain commit to pay 50-60 billion euros to the EU to cover EU spending up until 2020 when the current budget runs out. According to the negotiating guidelines:

10. A single financial settlement should ensure that the Union and the United Kingdom both respect the obligations undertaken before the date of withdrawal. The settlement should cover all legal and budgetary commitments as well as liabilities, including contingent liabilities.

The settlement includes such things as pension payments to British nationals working for EU employers and spending commitments for contributions to EU projects and social programs, based on past agreements. It also includes guarantees on loans such as the bailout of Ireland, and spending on infrastructure and structural funds agreed to but still to be financed.

An additional demand is that all amounts must be paid in euros. This is a particularly painful demand, because the British pound currency has lost almost 10% in value since the Brexit referendum passed last year. Telegraph (London) and Daily Mail (London) and Politico (EU)

Corrections to yesterday’s article on Macedonia

Early versions of yesterday’s article on Macedonia contained several errors. They’ve been corrected in the final version. I apologize for the errors.