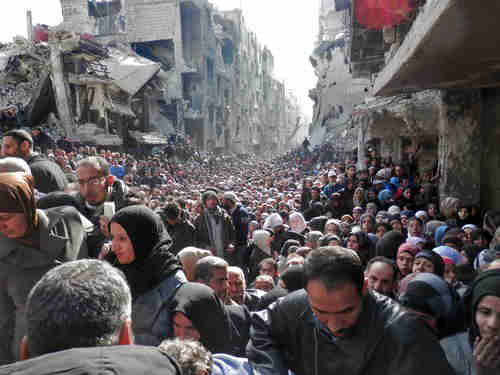 The Yarmouk refugee camp for Palestinians, in Damascus, Syria, in 2014 (Getty)

By this time, nothing should surprise us about the psychopathic depravity of Syria’s president Bashar al-Assad. In 2014, a forensic photographic nicknamed “Caesar” defected from al-Assad’s regime with tens of thousands of photos whom al-Assad had tortured using electrocution, eye-gouging, rape, strangulation, starvation, and beating on prisoners on a massive “industrial strength” scale. Al-Assad was so pleased and proud of this torture that he made sure each act was photographed.

In February, Amnesty International released a report based on interviews with 84 people that thousands of peaceful demonstrators had been brought to Saydnaya prison for the kind of extreme torture just described. As many as fifty prisoners per day were taken out of their cells and executed, with their bodies thrown into mass graves.

On Monday, the US State Department provided further insight into the execution of prisoners at Saydnaya prison. Apparent al-Assad was motivated by the concern that these huge mass graves might be discovered and show him in an unfavorable light. And so, the State Dept. says that in 2013 al-Assad took one of the buildings adjoining the Saydnaya prison and turned it into a crematorium, so that the bodies of the executed prisoners could be burnt to ashes, rather than thrown into huge mass graves.

According to the State Dept:

The facts we’re presenting today are based on reporting from international and local nongovernmental organizations, press reporting, and also Intelligence Community assessments. The continued brutality of the Assad regime, including its use of chemical weapons, presents a clear threat to regional stability and security as well as to the national security interests of the United States and our allies…

Moreover, the regime has also authorized the extrajudicial killings of thousands of detainees using mass hangings at the Saydnaya military prison. Saydnaya is a 45-minute drive outside of Damascus and is one of Syria’s largest and most secure prison complexes. Saydnaya is but one of many detention facilities where prisoners are being held and abused…

The regime holds as many as 70 prisoners in Saydnaya in cells that have a five-person capacity. And according to multiple sources, the regime is responsible for killing as many as 50 detainees per day at Saydnaya. Credible sources have believed that many of the bodies have been disposed in mass graves. We now believe that the Syrian regime has installed a crematorium in the Saydnaya prison complex which could dispose of detainees’ remains with little evidence.

Beginning in 2013, the Syrian regime modified a building within the Saydnaya complex to support what we believe is a crematorium, as shown in the photos that we have distributed to you. Although the regime’s many atrocities are well documented, we believe that the building of a crematorium is an effort to cover up the extent of mass murders taking place in Saydnaya prison.

There is speculation that the State Dept released this information at this time in order to put pressure on Russia to rein in Bashar al-Assad from committing new atrocities. US State Dept and Reuters

Final push to expel ISIS from Raqqa, Syria, to begin in June

Rojda Felat, commander of the Kurdish Women’s Protection Units (YPJ) in Syria, which is part of the Syrian Democratic Forces (SDF) in the “Euphrates Wrath Operation” to liberate Raqqa from ISIS, said that the attack will be launched in June: “The attack on Raqqa will take place in the beginning of the summer.”

It is believed that there are almost 4,000 fighters from the so-called Islamic State (IS or ISIS or ISIL or Daesh) in Raqqa, which is the ISIS “caliphate” and major stronghold. The SDF is joining with the elders of Raqqa’s tribes to surrender:

We call upon all Syrians who joined the ranks of ISIS and those who carry arms, administrators or preachers, to surrender themselves to the nearest military base of the SDF to preserve his or her life and family, and the city from destruction. We are ready to provide all relief and humanitarian support to those who surrender within a maximum of ten days.

The SDF consists mostly of Kurdish fighters from the Kurdish People’s Protection Unit (YPG), along with a lesser number of fighters from the Free Syrian Army (FSA). Once Raqqa is captured, the plan is to go down the Euphrates Valley and completely destroy ISIS, which currently controls about 35% of Syria.

The United States military has been gradually increasing its involvement with the SDF, which it backs. It’s believed that there are about 700-1,000 US special forces troops in the area. Several hundred are being sent mainly to protect the Kurds from Turkey’s military.

Last week, the US military announced that it will move quickly to get weapons, including small arms, mortars, heavy machine guns, shoulder-fired weapons and ammunition, into the hands of the YPG Kurds for use in fighting ISIS. The US considers the YPG to be the most effective fighting force in Syria against ISIS.

Turkish officials are furious at this, since they consider arming the Kurds to be an existential threat to Turkey. The Kurdistan Workers’ Party (PKK) has conducted numerous terrorist attacks within Turkey, and has conducted an on-and-off civil war in Turkey for decades.

Turkey’s president Tayyip Recep Erdogan will be visiting president Donal Trump in Washington today (Tuesday), and Syria will be a major topic on the agenda. ARA News (Syria) and Al Arabiya and Sputnik News (Moscow)