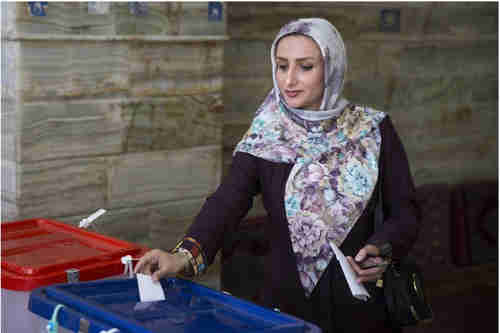 Iran’s president Hassan Rouhani won an election battle to be decisively re-elected for a second four-year term as president. Rouhani is considered a moderate, and was not favored by the Supreme Leader Ayatollah Seyed Ali Khamenei. Rouhani won 57 percent of the vote in a large turnout, a huge margin against Khamenei’s favored candidate, hardline cleric Ebrahim Raissi, who got only 38 percent of the votes.

In his victory speech, Rouhani said:

Honorable Iranian nation, you are the winners of the election. I humbly bow to you. I will remain faithful to my vow to you…

Prouder than ever before, Iran is today ready to step up its relations with the world on the basis of mutual respect and national interests.

Our nation’s message (of peace and friendship) was explicitly departed to the world … and the nation expects this most important message to be correctly heard by all governments, neighbors, and specifically, by great powers. …

“Our elections indicated to the neighbors and the region that the way to restore security to the region is to shore up democracy and honor the people’s votes rather than to rely on foreign powers. …

Today, the world is well aware that the Iranian nation has chosen the path of interaction with the world, a path which is distant from extremism and violence. Our nation seeks to live in peace and friendship with the world. However, it is not ready to accept any disrespect or threat. This is our nation’s most important message, and our nation expects the message to be appropriately heard by all states, neighboring countries and, particularly, world powers.

It is an interesting observation that Iran comes second only behind Israel as the most democratic countries in the Mideast.

Analysts indicate the decisive victory comes from the overwhelming support of young people, who came out in large numbers because of opposition to the hardline restrictions on dress, free speech, and gender relations, and because of the widespread belief that Khamenei and the hardliners were using illegal tactics to win the election. Some analysts say that the election was about the economy, but since Rouhani has failed to meet his election promises in the economy, that does not seem to be the reason that Rouhani won. Instead, it appears that young people ignored the economic issues just to vote against the hardline clerics.

Rouhani’s decisive electoral victory is not enough to be called an Awakening era climax, but it could trigger events that could lead to such a climax. During the campaign, Rouhani bitterly criticized his political opponents, including Raisi’s supporters and the powerful Islamic Revolution Guards Corps (IRGC) which enforces many of the hardline laws. Now that the election is over, hardliners are expected to “settle scores,” and this could result in a major political battle of a kind similar to the one that led to Nixon’s resignation.

In fact, there is a particularly bitter battle on the horizon. Khamenei has been Supreme Leader since 1989, but he’s 77 years old, and is in poor health, so there’s a succession battle approaching. This succession battle may trigger the Awakening era climax that we’ve been describing. Tehran Times and Reuters and The Hindu

As I’ve been writing for over ten years, Generational Dynamics predicts that Iran will be an American ally in the approaching Clash of Civilizations world war, which will pit the US, India, Russia, Iran and the west against China, Pakistan and the Sunni Muslim countries.

Now would be a good time to briefly reprise the reasons for the prediction that Iran will be an American ally. There are two major categories of reasons.

Now would also be a good time to reprise the three events of 1979 that shook the Muslim world in the Mideast and beyond, and how they affect events today:

Needless to say, Americans today are totally oblivious to the events described here, but these were epochal events in the history of the Arab, Persian and Muslim worlds in the Mideast and beyond, and they define what’s happening in the Mideast today.

President Donald Trump visited Saudi Arabia on Saturday, on the first leg of his five-nation tour. The first three visits will be to the centers of the Abrahamic religions – Riyadh in Saudi Arabia, Jerusalem, and the Vatican. After that, he will visit Brussels, the capital of the European Union, and then Taormina Italy for the G-7 meeting.

Trump was received like visiting royalty in Saudi Arabia. Trump, his wife Melania, and his senior White House staff were serenaded by military bands, treated to a flyover of Saudi jets, feted in opulent palaces and given the undivided attention of Saudi’s 81-year-old King Salman bin Abdulaziz al-Saud.

Trump and Salman signed an agreement for the sale of $110 billion of military equipment to Saudi Arabia over several years. The deal includes tanks, combat ships, missile defense systems, radar and communications, and cybersecurity technology. Trump was joined on the trip by the CEOs of several major U.S. companies, which announced their own agreements with the Saudis. Among them was a $15 billion arrangement with GE focused on power, oil and gas, and health care.

What is most interesting about Trump’s visit is the symbolic flip-flop from the previous administration to the current one in attitudes towards Iran and Saudi Arabia.

President Barack Obama repeatedly showed his contempt, in one way or another, for the Saudis, and the feeling was mutual. However Obama, through his Secretary of State John Kerry who believes that America’s soldiers are terrorists, repeatedly sucked up to the Iranians, making one humiliating concession after another to close the nuclear deal. However, the feeling was not mutual, as Iran repeatedly insulted Kerry, Obama, and the American people, and still does.

This is a good time to remind readers that it is a core principle of Generational Dynamics that, even in a dictatorship, major decisions are made by masses of people, by generations of people. The attitudes of politicians are irrelevant, except insofar as they represent the attitudes of the people. So the relations between American, Iranian and Saudi leaders is much less important than the attitudes that the masses of Americans, Saudis, and Iranians have for one another.

So we note the following:

I believe that a great deal of information can be determined by detailed generational analyses of the various tribes and ethnic groups in the Mideast. I believe that this analysis could be used to predict how events will unfold in the coming years. I certainly don’t have anything like the resources to perform such an analysis, but any college student interested in this kind of analysis could make an invaluable contribution to understanding what’s going on in the world today by taking on, as a thesis topic, a generational analysis of the tribes and ethnic groups in the Mideast. AP and Arab News