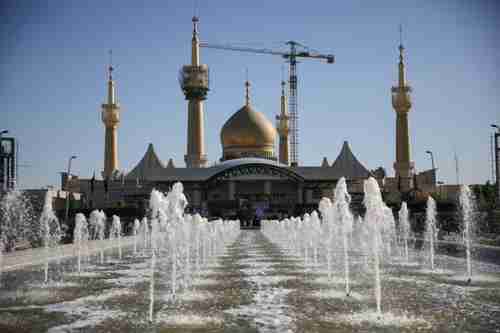 Iran is vowing quick revenge for a pair of terror attacks that struck Tehran on Wednesday morning.

First, four gunmen, some dressed as women, burst into Iran’s parliament on Wednesday morning, armed with grenades and explosive vests. 12 people were killed after two vests had been detonated. After a five hour standoff, the four attackers were killed by police.

A second, almost simultaneous and highly symbolic attack occurred a few miles away, when a suicide bomber exploded his vest near the mausoleum of Grand Ayatollah Ruhollah Khomeini, who was the founder of Iran’s Islamic Republic after leading the 1979 revolution. One person was killed, another wounded.

Five people believed to be planning a third attack were arrested.

The so-called Islamic State (IS or ISIS or ISIL or Daesh) claimed credit for the terror acts and backed up their claim during the attack by posting video from inside the parliament building. Iran later confirmed the claim, by saying that all the attackers were Iranian nationals who had joined ISIS.

This attack will come as a huge shock to Iranians, who imagined that they were somehow immune from the jihadist attacks that affect other countries in the region. ISIS and al-Qaeda had not been very successful in Iran because it is a mostly Shia Muslim country, making it difficult for the Sunni jihadist groups to recruit suicide bombers. However, there is a small community of Sunni Muslims in Iran, and it appears that ISIS has been able to infiltrate that group.

World public opinion, especially in Iran, sees the fact that this terrorist act was perpetrated soon after the meeting of the US president with the heads of one of the reactionary regional states that has always supported… terrorists as to be very meaningful.

Iranian officials point out that hours before the attack, Saudi Arabia’s foreign minister Adel al-Jubeir said that Iran must be punished for alleged interference in the region and support for terrorist organizations.

The Saudis are likely to be infuriated by the implication that they were involved, and the terror attack is likely to worsen the already high tensions in the Gulf region, as well as the vitriolic statements that Iran and Saudi Arabia make about each other.

A statement by US President Donald Trump carried a mixed message, expressing sympathy for the victims but suggesting that Iran itself was to blame:

We grieve and pray for the innocent victims of the terrorist attacks in Iran, and for the Iranian people, who are going through such challenging times. We underscore that states that sponsor terrorism risk falling victim to the evil they promote.

BBC and CNN and Fars News (Tehran) and AP

However, Turkey is strongly supporting Qatar, and criticizing the Saudi-led effort to isolate Qatar. Turkey’s president Recep Tayyip Erdogan said that Turkey will do everything in its power to help end the crisis.

On Wednesday, Turkey’s parliament fast-tracked a bill to deploy up to 3,000 troops to Qatar. The troops will be stationed at a Turkish military base in Qatar that was originally set up in 2014, during the last period of time when Saudi Arabia had broken diplomatic relations with Qatar.

Although Turkey denies that the plans for a troop deployment are related to Qatar’s split with Saudi Arabia, some analysts suggest that the purpose of the planned troop deployment was to help forestall a possible coup attempt in Qatar provoked by the Saudi government. Daily Sabah (Turkey) and Al Jazeera (Qatar)