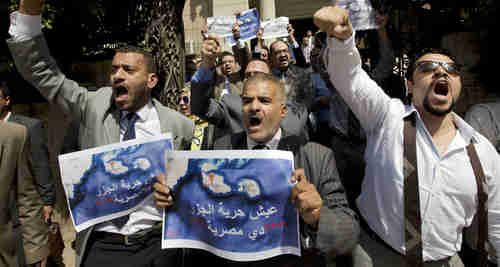 Dozens of Egyptian lawyers shout slogans during a protest in front of the Lawyers’ Syndicate in Cairo against the agreement to hand over Tiran and Sanafir to Saudi Arabia. (AP)

Egypt’s president Abdel al-Fattah al-Sisi on Saturday ratified an extremely controversial deal that hands over the two strategically important Red Sea islands of Tiran and Sanafir to Saudi Arabia. The islands are at the mouth of the Gulf of Aqaba, where they oversee the passage of ships carrying goods between the Red Sea and four countries – Egypt, Israel, Jordan and Saudi Arabia.

The plans to hand over the islands were part of an April 2016 announcement that the two countries would build a land bridge connected Saudi Arabia and Egypt, 10-20 miles (16-32 km) long, right at the location where the prophet Moses is said to have parted the Red Sea, in order to bring his people out of slavery into the Promised Land. It would be called the King Salman Bridge, named after Saudi Arabia’s leader, Salman bin Abdulaziz al-Saud.

That announcement triggered massive protests in Egypt, with opponents claiming that Egypt was forfeiting the country’s territory and sovereignty in exchange for bribery and extortion by Saudi Arabia – a threat to cut off fuel subsidies, and the promise of $22 billion in development projects in Egypt to help its ailing economy.

Opponents of the handover claim that the Tiran and Sanafir Islands were granted to Egypt in 1906 in an agreement to draw up formal boundaries between Egypt and the Ottoman Empire. Supporters of the deal claim that they have always belonged to Saudi Arabia, but they were placed under the administration of Egypt in 1949 in the wake of Arab-Israeli tensions, following the creation of the state of Israel.

The main emotional attachment that Egyptians have to the islands follows from the fact that many Egyptians died defending the islands during two wars with Israel, one in 1957 and one in 1967. Israel captured the two islands in the 1967 Six-Day war, but they were returned to Egypt under the 1979 Camp David accords.

The validity of the handover has been extremely contentious in Egypt’s court system. In January 2017, Egypt’s High Administrative Court voided the deal handing over the islands. Then, in April, the Cairo Court for Urgent Matters OKed the deal, after ruling that the High Administrative Court has no jurisdiction in the matter. On June 14, Egypt’s parliament approved the deal. Egypt’s Constitutional Court has yet to rule on the matter, and may still nullify the deal.

A major deal such as this one would normally call for lavish ceremonies, but a decision has been made to have no ceremonies whatsoever, for fear of triggering further protests. Al-Ahram (Cairo) and France 24 and Egypt Independent

Map showing the Red Sea, Strait of Tiran, and Gulf of Aqaba

The Multinational Force and Observers (MFO) is a little-known international peacekeeping force from 11 different countries including the United States, Fiji, Colombia, Uruguay, Canada, Australia, New Zealand, Norway, France, Italy, and others. The MFO is located in Egypt’s Sinai desert, in two camps. The South Camp is located on the southern tip of the Sinai directly on the Red Sea, where it oversees the islands of Tiran and Sanafir, and guarantees unimpeded freedom of navigation and overflight through the Strait of Tiran and the Gulf of Aqaba.

The MFO was originally conceived at the United Nations following the Camp David Accords. The MFO was proposed in the Security Council, where it was vetoed by China and Russia. As a result, the US, Egypt and Israel agreed to set up the MFO as an independent deal outside the UN framework.

The MFO has 1,667 military personnel supplied by twelve countries and 17 civilian officials. The US contributes nearly 700 personnel to the MFO, and also pays nearly a third of the organization’s $86 million annual budget.

The original purpose of the MFO was to guarantee peaceful relations between Egypt and Israel. It would seem to have outlived its usefulness, since relations between Egypt and Israel have never been better. However, when President George Bush wanted to scale back the MFO in 2003 in order to save money, both Egypt and Israel joined together to urge the US to reconsider. As a result, there is little or no desire on anyone’s part to eliminate or scale back the MFO, and the Tiran and Sanafir island handover should have no effect.

It’s considered to be the most successful peacekeeping operations in recent history, and it’s expected to continue. The Multinational Force & Observers (MFO) web site and Global Security and Politico (1-Nov-2015)