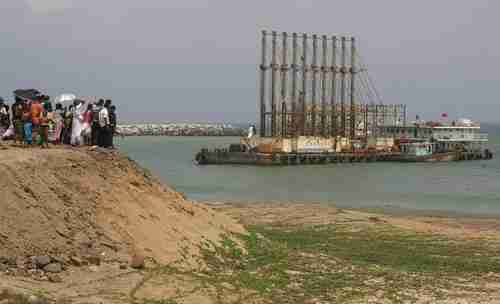 Last week, Sri Lanka’s government signed an agreement giving China a 99-year lease to use Sri Lanka’s strategically valuable southern Hambantota seaport. The seaport is on the main shipping route from Asia to Europe and oversees the Indian ocean all the way to Antarctica. In addition, China will hold a 70 percent stake in a joint venture to handle the commercial operations of the port.

The deal has been extremely controversial for several reasons:

The deal triggered violent protests earlier this year by Buddhist monks and anti-government protesters, but there were few protests when the deal was finally signed on July 29.

The agreement is considered a very bad deal for Sri Lanka, even by those politicians who felt that Sri Lanka had no choice but to go ahead with it as part of a debt repayment scheme. In 2009, China invested $1.2 billion in the Hambantota seaport. Sri Lanka had expected to repay the debt through profits earned by the port, but the slowdown in trade throughout the entire region in the last few years has meant that Sri Lanka has been unable to repay the debt, and now China has essentially taken over the port in lieu of repayment of the debt.

The deal has generated a great deal of anger by people who are accusing China of having purposely set a “debt trap” in 2009, knowing that Sri Lanka would be unable to repay the debt, and would be forced to give away Sri Lankan assets to China. Container Management Magazine and Asian Tribune and Colombo Gazette and LankaWeb

Recently, China launched a naval military base in Djibouti in eastern Africa as the endpoint to its “string of pearls,” commercial deep-water ports in the Indian Ocean that China could use in time of wars. Many of these ports were built and often are operated by Chinese companies. These include deep-water ports in Sri Lanka, in Colombo and Hambantota; Pakistan, in Gwadar and Karachi; Myanmar, in Sittwe; and the Seychelles, in Port Victoria. The Gwadar port in Pakistan is expected to be upgraded to a full Chinese military base soon.

These are all part of China’s $1 trillion “One Belt One Road” (OBOR) initiative consisting of an overland Economic Belt and a Maritime Silk Road. Although these infrastructure projects are supposed to be for commercial use, Indian officials believe that China is preparing for war by surrounding India with the Hambantota port and other ports, as well as the China-Pakistan Economic Corridor (CPEC) that appears to be impinging on the India-government portion of Kashmir. And this is occurring at a time when China and India are close to a border war over the Doklam Plateau in Bhutan.

India is attempting to match China’s influence in the region by executing its own major infrastructure projects. India is involved in joint economic and technical projects with Bangladesh, Bhutan and Nepal. India is also investing heavily in Africa to compete with China there.

India is part of the North-South Transport Corridor (NSTC) which links India with Iran, the Central Asian countries, and Russia. Part of NSTC is the port in Chabahar, which is on the coast of Iran near Pakistan. It is a direct competitor to China’s Gwadar port in Pakistan. Using it, India will be able to bypass Pakistan in shipping goods to Iran, and from there to Afghanistan, Central Asia or Europe.

However, India’s projects are generally much smaller than China’s, and are often only in the planning stages. For example, India invested $54 billion in Africa and Indo-African trade in 2016, while China invested $194 billion. Menafn (Middle East North Africa Financial Network)

We have reported several times on the growing tensions in Bhutan’s Doklam Plateau, which China would like to invade and annex, but is being blocked by India forces, although no shots have yet been fired.

As we reported yesterday, China is threatening war over Doklam and believes they will “annihilate” India’s army.

Many analysts, including some officials in India, believe that sooner or later India will back down. However, a web site reader pointed out that it is a lot more serious than a simple border dispute over a small piece of land:

The Indians will definitely fight, because if they don’t push back now, they will wake up and find Eastern India cut off from New Delhi. This is a red line the Indians will never allow to be crossed. And this is where it gets really dangerous. China doesn’t need to steal land from Bhutan to survive, but India needs to preserve the Siliguri Corridor because India has no choice but to defend it if it wants to preserve the country. India will fight. It’s the Chinese who are miscalculating.

The Siliguri Corridor, also known as the “Chicken’s Neck,” is a land corridor that connects western and eastern India. If China takes control of the Doklam Plateau, they will also take control of the Chicken’s Neck corridor, and India will be effectively split into two pieces.

The Doklam Plateau conflict has turned into an existential threat for both countries, and it seems that neither China nor India will back down. There is also a hard deadline in getting the issue resolved, as there is a Chinese “People’s Congress” in November, and China’s president Xi Jinping will look extremely weak if there’s still a standoff.

And according to the somewhat hysterical Global Times article that I quoted yesterday, the Chinese say that they will “annihilate” the Indian army, and it would not surprise me if they actually believe that. Needless to day, the Indians do not agree. And it is worth remembering that the Saudis expected to annihilate the Houthis when they invaded Yemen in 2014.

Finally, for those readers who enjoy a little black humor, we have a remarkable analysis appearing Sri Lanka’s Daily Mirror, who has this response to people who fear war between China and India:

Have no such fears. With certainty, it can be said that nuclear powers will not go to war. Take heart from Wednesday’s US statement offering peace talks with North Korea. It came days after the maverick regime carried out a successful test of an Intercontinental Ballistic Missile capable of hitting the US mainland.

The deterrent value of nuclear weapons is one of the key factors why the Third World War has still not happened. For nearly two months, China and India have been bogged down in a face-off in the Himalayas. But neither wants to start a major war. Nuclear powers may find themselves in warlike situations, but will not go to war, unless insane leaders take control of affairs. This is why China and the US have not gone to war over the South China Sea disputes.

I know that regular readers of my Generational Dynamics articles will have a good laugh over this.

However, with both India and China facing an existential crisis over the Doklam Plateau, the situation is a disaster in the making, unless someone can figure out a face-saving formula that both sides can agree to in the next month or so. India Times (3-July) and Daily Mirror (Sri Lanka)