The Chinese state newspaper Global Times is applauding the communist government in a column published Monday for its “fair” organ transplant system, in an article titled “Sound Legal System and Fair Distribution in China’s Organ Transplant Hailed by International Community.”

While the title promises hailing from the international community, the extensive article only includes one sentence about the acclaim China has allegedly received: “The system is also hailed by international experts, including Francis Delmonico, former president of The Transplantation Society and a Harvard Medical School professor.”

This is likely because, in reality, the international community has condemned China for decades as evidence has mounted that its “fair distribution” of organs has largely distributed organs from unwilling political prisoners to generously paying patients. While the article claims “China has made every effort to establish a sound legal system to eradicate organ trafficking and to guarantee that the organs are distributed in a fair and transparent manner,” reports published as recently as this year suggest that prisoners of conscience continue to experience medical testing consistent with organ donation searches and China continues to profit from the practice.

A study published in June 2016 found evidence that China did not document tens of thousands of organ transplants on a regional level, which means there is no record of where the organs in question came from. The study also found hundreds of Chinese hospitals that conducted organ transplants but were not certified by the government to do so. While China has insisted that organ farming from political prisoners is a thing of the past, surviving prisoners of conscience have testified to seeing organ harvesting in prisons in recent times. 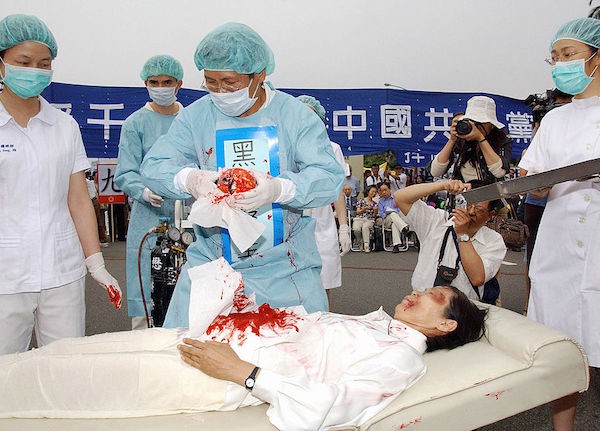 Taipei, TAIWAN: During a rally joined by thousands of Falun Gong practitioners at Taipei 23 April 2006, four demonstrators play in an action drama against what they said was the Chinese communists’ killing of Falun Gong followers and harvesting of their organs in concentration camps. China outlawed the Falun Gong, which combines meditation with Buddhist-inspired teachings, as an “evil cult” in mid-1999 and practitioners have subsequently faced often brutal repression. AFP PHOTO/PATRICK LIN

In May, PBS Newshour released a report in which human rights advocates asserted that they had interviews political prisoners who had been tested as potential organ donors regularly during their arrest. “They have obviously got a lot of people sitting around waiting to be killed for a transplant. And they are just picking the right person to be killed depending on who the patient is,” human rights attorney Matas asserted.

China has received widespread international condemnation for its practices, most recently at a Vatican conference on organ trafficking in February.