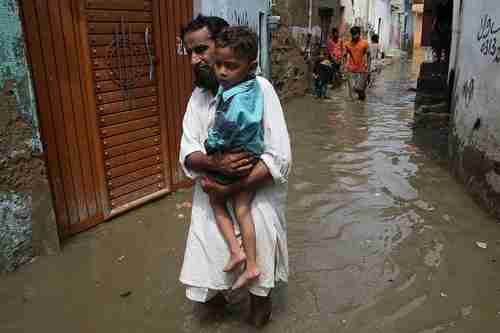 A flooded street in Karachi on Friday (EPA)

Some 45 million people in a region stretching from Nepal and Bangladesh through India to Pakistan are dealing with “catastrophic” floods from two months of continuous torrential rain in the worst monsoon season in years.

Wide-scale flooding stretching across the Himalayan foothills has caused landslides and washed away tens of thousands of homes and vast swathes of farmland. At least 1,400 people have been killed. Elsewhere, hundreds of thousands of homes have been damaged or destroyed, and many people are facing starvation. In Bangladesh, 1,300 cases of water-borne diseases have been reported. In Mumbai, a multi-story residential building collapse claimed 33 lives, left 15 injured and dozens more buried in the rubble. In Karachi, at least 23 people have died, mostly due to electrocution. New Daily (Australia) and Reuters

As we described yesterday, Kenya’s president Uhuru Kenyatta was initially restrained on Friday, after Kenya’s Supreme Court declared that his presidential election victory was “invalid, null and void” because of electoral committee irregularities. Kenyatta said that he respected the court’s decision, and called for peace. But that did not last long, as he began calling the judges “crooks,” saying that there was a problem with the court, and promising to “fix it” after he was reelected.

Isaac Okero, the president of the Law Society of Kenya, on Saturday condemned Kenyatta’s remarks:

Ominously declaring that they (judges) should wait for him (President Kenyatta) after he is successful in the coming fresh election is unfortunate and wholly inappropriate remark from the Head of State who under the constitution is a symbol of national unity, enjoys immunity from criminal and civil proceedings and must promote and enhance the unity of the nation.

It is not clear what Kenyatta meant when he said that he would “fix” the problem with the court once he is elected, but if I were one of the judges, I would be looking for a way to get out of the country quickly. The Nation (Kenya)

Attacks by Burmese Buddhists, led by Buddhist monk Ashin Wirathu, since 2011 as we have been reporting, are now clearly crossing the line into full-scale genocide.

Buddhists have been slaughtering Rohingyas, raping women and burning down villages, in a policy to exterminate them. Bangladesh, which already hosts 400,000 Rohingya refugees, earlier refused to allow any more to enter, but they have reversed that policy. In the last few days, 60,000 more Rohingyas have crossed the Naf River into Bangladesh to flee the Buddhist violence, and more are crossing every day. However, even that path is dangerous, as Burma’s army on foot and in helicopters are shooting dead any Rohingyas they seen fleeing to Bangladesh, leaving numerous dead bodies in the river.

When the Rohingyas do reach the Bangladesh side, they can turn around and see their villages being burnt to the ground, and other Rohingyas being shot to death.

This is rapidly turning into a full-scale genocide, similar to last century’s Nazi Holocaust of the Jews, Stalin’s Holodomor in Ukraine, and Pol Pot’s Killing Fields in Cambodia. The only difference between these is the methods used to implement the “holocaust.” BBC