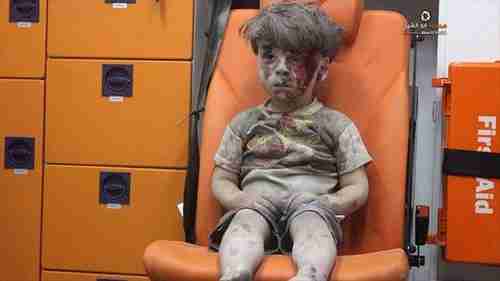 From August 2016: Five year old boy, Omran Daqneesh, sitting confused in an ambulance in Aleppo after being pulled from the rubble of one of Bashar al-Assad’s airstrikes. To al-Assad, this boy and others like him are just cockroaches to be exterminated.

Syria’s president Bashar al-Assad promised last year that when his air force was finished killing as many people as possible in the battle of Aleppo, then the Syrian war would be end, because his opponents would have nothing left to fight for.

A report by the International Committee of the Red Cross (ICRC) indicates not only that the war has not ended, but that in fact the level of fighting across much of Syria has reached the levels of the battle of Aleppo.

Much of the fighting is around the eastern city of Deir al-Zour, which is one of the last strongholds in Syria for the so-called Islamic State (IS or ISIS or ISIL or Daesh). There are many groups fighting ISIS in Deir al-Zour: The Syrian army backed by the Russian military, Iranian-backed Hezbollah militias, and mostly Kurdish Syrian Democratic Forces (SDF), which have been supplied weapons by the US military.

However, there is also fierce fighting in three “de-escalation zones” – Idlib, rural Hama and eastern Ghouta – that were set up in a series of “peace talks” held in Astana, Kazakhstan. The participants in the meetings were Russia, Iran, and Turkey, but most noticeably did not include the Syrian regime or any of the opposition groups to Bashar al-Assad. The result is that it appears that the de-escalation zones are unraveling, to no one’s real surprise.

The Syrian Observatory for Human Rights said at least 3,000 people, including 955 civilians, were killed during September, making it the deadliest month of the conflict so far this year. More than 70 percent of the civilians were killed in air strikes. Furthermore, as many as ten hospitals have been damaged during the last 10 days, cutting hundreds of thousands of people off from access to basic healthcare.

In a separate development, al-Assad’s air force is once again using Sarin nerve gas civilians, based on laboratory analyses of samples taken from the north Syrian town of Ltamenah which was bombed by Syria’s air force. The Syrian air force bombing injured around 50 people, although nobody was believed to have been killed. The finding was announced on Thursday by the by the Organization for the Prohibition of Chemical Weapons (OPCW).

According to Nikki Haley, the US ambassador to the United Nations:

For years the Assad regime has used chemical weapons to murder and terrorise innocent Syrian civilians. Unfortunately, it’s clear that the Syrian regime not only lied about the extent of their chemical weapons programmed, but that they will continue to refuse to cooperate with watchdog organizations like the OPCW.

As I’ve written many times in the past, Bashar al-Assad is the worst genocidal monster so far this century. The Syrian war began in 2011 when al-Assad ordered his army and air force to attack peacefully protesting civilians, including women and children. Things really turned around in August 2011, when al-Assad launched a massive military assault on a large, peaceful Palestinian refugee camp in Latakia, filled with tens of thousands of women and children Palestinians. He dropped barrel bombs laden with metal, chlorine, ammonia, phosphorous and chemical weapons onto innocent Sunni women and children, he’s targeted bombs on schools and hospitals, and he has used Sarin gas to kill large groups of people. He considers all Sunni Muslims to be cockroaches to be exterminated.

After the attack on the Palestinian refugee camp, thousands of young Sunni jihadists from 86 countries around the world traveled to Syria to fight al-Assad, and they formed ISIS. Thanks to al-Assad, millions of Syrians have fled to neighboring countries to escape the violence, and over a million have fled to Europe. The amount of global destruction that al-Assad has brought about is truly breathtaking.

As I’ve written many times, al-Assad is a delusional psychopath, and from the point of view of Generational Dynamics, his delusions are based on the experiences of his father, Hafez al-Assad.

Syria’s last generational crisis war was a religious/ethnic civil war between the Shia Alawites versus the Sunnis. That war climaxed in February 1982 with the destruction of the town of Hama. There had been a massive uprising of the 400,000 mostly Sunni citizens of Hama against Syria’s Shia/Alawite president Hafez al-Assad, the current president’s father. He turned the town to rubble and killed or displaced hundreds of thousands. Hama stands as a defining moment in the Middle East. It was so shocking that it largely ended the war.

As I’ve written many times, the war in Syria will never end as long as Bashar al-Assad is in power. Syria is in a generational Awakening era, with little desire for war, as the survivors of 1982 are still war-weary from what happened at that time. This war would have ended long ago, except that Bashar al-Assad – along with Russia, Iran and Hezbollah – have forced it to continue. Bashar al-Assad is a delusional psychopath who will never allow the war to end, and apparently Russia, Iran, and Hezbollah are willing to shed blood and treasure to support him.

Last year, al-Assad claimed that the battle of Aleppo was “history in the making”:

Joshua Landis, from the Center for Middle Eastern Studies at University of Oklahoma, is an expert on Syria. He was interviewed on the BBC on Thursday, where he gave a chilling analysis of what’s to come. Landis was asked why there’s been a spike in violence in Syria (my transcription):

In the south of Syria, near the Jordanian border, it has largely been controlled. But in the north of Syria, there is intense fighting around Deir az-Zour, major provincial capital, held by ISIS, both pro-US Kurdish forces and the Syrian army are trying to take that city, and trying to take the Euphrates, all the way down to the Iraqi border. And there’s a scramble to destroy ISIS as quickly as they can, and to grab as much territory. This territory has lots of oil wells in it. It’s very important for the future of both the Kurds and Syria. So this is causing a spike in the amount of deaths , because they’re trying to go as quickly as they can, they’re not being very discriminatory.

Then in the west of Syria, the northwest, near the Turkish border, there’s been a lot of fighting and a lot of bombing, by the Syrian air force and the Russian air force, of rebels, largely extremist Muslim rebels. and so this doesn’t entirely put paid to the de-escalation zones, but on the other hand it shows how delicate they are, and that the war is far from over.

Landis said that the agreements that created the de-escalation zones are unraveling and that Syria wants to destroy the hospitals that the Syrian air force has been attacking:

This has unraveled. And there’s a lot of fingers pointing to whose fault it is. There was an attack from Idlib province towards Hama, that gave the Russians and Syrians an excuse to go after these militias in the Idlib province, but now they’ve gone on for weeks, and they’ve bombed many hospitals in the region, and they’ve escalated far beyond a tit for tat basis.

Well, a lot of those hospitals are being maintained by western NGO’s, by Syrian charitable organizations and so forth, and I think the Syrian govt wants to destroy them in the northwest of Syria. Idlib province, a rebel-held province, has become a dumping ground for all kinds of rebel groups, and Syria, as well as the Russians, I think hope that they drive a lot of those rebels out into Turkey.

It wants to make the region uninhabitable, and inhospitable, to all groups, so that they flee, making it easier for the Syrian army to push back into the region.

If Landis is correct, this is really a dramatic development. It took months for al-Assad to make Aleppo “uninhabitable and inhospitable,” and Landis says that al-Assad wants to do the same for all of Idlib province. Based on the Aleppo experience, this would involve months of extremely bloody fighting.

Landis was asked: If ISIS is defeated in the east and in the north, can we expect the Syrian government and its allies to shift their focus to some of the opposition-held regions that are relatively peaceful right now?

Absolutely. And this is a problem with these de-escalation zones. The United States I think has sold them as something that could be permanent, but Bashar al-Assad has said in no uncertain terms that he plans to take back all of Syria. And the Russians have said that they do not intend to partition Syria.

So for both of them, deescalation zones are a temporary fix. It allows them to fight ISIS now, in the northeast of Syria, but as soon as that fight is finished, they’re gonna swing back, and they’re gonna begin to mop up rebel-held territory in other parts of Syria. So those truces are temporary, and some of them are breaking down, as you say today.

This is astonishing. According to Landis, al-Assad is going to “swing back and mop up” other parts of Syria, so that he can have control once again of all of Syria. I personally do not believe that this is even possible and that it is all part of al-Assad’s delusion, but if it did happen, it would take years of bloody war, with continuing support from Russia, Iran, and Hezbollah.

From the point of view of Generational Dynamics, pretty much the only way that a war can end is with an explosive climax at the end of a crisis war during a generational Crisis era. Examples are the 1982 destruction of Hama or the 1945 nuking of Japan. Awakening era wars can only end with an armistice or peace agreement which is typically violated a few months later. With the delusional Bashar al-Assad in power in Syria, there is no chance at all that the Syria war will end anytime soon. Al Jazeera