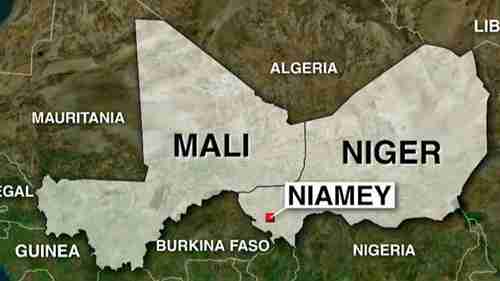 Ambush of US soldiers occurred near Niamey, the capital city of Niger

Four U.S. troops, along with five Nigerien soldiers, were killed on Wednesday in an ambush in Niger near the border with Mali. This was the first time that US forces have died in Niger.

The 12-member U.S. team was leaving a meeting in unarmored pick-up trucks when they were lured into an ambush and began taking from small arms, machine guns, and rocket-propelled grenades.

There were 50 attackers, believed to be part of a Mali jihadist group linked to the so-called Islamic State (IS or ISIS or ISIL or Daesh). The service members, including multiple Army Special Forces soldiers, exited the vehicles, ran for cover, and began returning fire, killing some of the attacking militants. In addition to the four deaths, two service members were injured and evacuated to a hospital in Germany.

After the ambush, U.S. officials realized that one of the U.S. service members were unaccounted for, and it was feared that he might have been taken prisoner. A large-scale search-and-rescue operation involving US, French, and Nigerien troops was launched, and U.S. Navy SEALs were flown to a U.S. military base in Sigonella, Sicily, in anticipation of a possible rescue attempt. However, they never went to Niger as the body of the fourth dead soldier was found on Friday.

No one has claimed responsibility for the ambush, but there are two major choices, one linked to al-Qaeda and one linked to ISIS. The first is the “Group for the Support of Islam and Muslims” (JNIM, Jama’at Nusrat al-Islam wal-Muslim) that we described at length several days ago. JNIM and its al-Qaeda predecessors have conducted many other operations in Niger, including kidnappings and suicide attacks.

However, the U.S. military believes that this ambush was performed by “Islamic State in the Greater Sahara” (ISGS), which is linked to ISIS. Little is known about ISGS, since it is overshadowed by the al-Qaeda linked jihadists and competes with them. They have links to Boko Haram in Nigeria, and their fighters are believed to be nomadic people, such as the Tuaregs. CNN and SOFREP and Long War Journal and Washington Post

In 2013, Barack Obama informed Congress that 100 troops would be deployed to Niger. They set up a drone base near Niamey to assist the French with surveillance and intelligence and also began serving in a train, advise and assist role with Nigerien forces. The U.S. had already been providing the French with aerial refueling for its Mirage and Rafale warplanes. Since then, that number has grown to 800 troops.

This was not expected. Had we anticipated this sort of attack we would have absolutely devoted more resources to it to reduce the risk and that’s something we are looking at right now.

It was not meant to be an engagement with the enemy. The threats at the time were deemed to be unlikely, so there was no overhead armed air cover during the engagement.

The American troops in Africa are there to train Nigerien troops in anti-terrorism tactics to battle violent extremists, including counterterrorism, intelligence, and security techniques. But in this case, they were carrying out a joint patrol with Nigerien forces, suggesting that they were taking part in military operations, and yet were unprepared for the ambush.

Cheadle added that Africom was reevaluating its force protection procedures for its advisory missions.

It is little reported, but the U.S. military is increasing its presence in Africa, with counterterrorism operations in mind. The largest U.S. base on the continent is in Djibouti, in the Horn of Africa, which gives U.S. forces the ability to launch airstrikes and special operations raids into nearby Yemen and Somalia while also covering the critical Bab el-Mandeb waterway that leads into the Red Sea.

There are bases in Somalia and Kenya, for the fight against al-Shabaab. Tunisia has an American drone base that can strike al-Qaeda and ISIS offshoots in Libya. There are American forces in Chad and a drone facility in Cameroon, both helping the fight against Boko Haram. US involvement in Africa is slated to grow. Military.com and NPR and Reuters and Foreign Policy