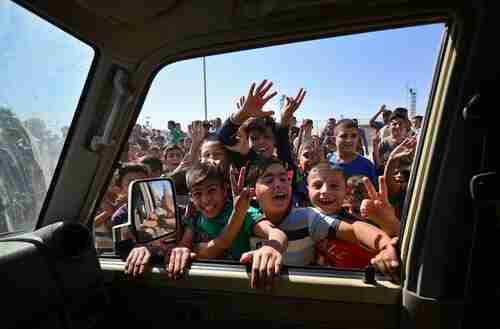 People in Erbil, the capital city of the Kurdistan Regional Government (KRG), were shocked on Monday at the speed with which their supposedly legendary Peshmerga militias defending Kirkuk collapsed at the approach of Iraqi army forces and Shia militias, in what is seen as a total rout.

For several days, Kurdish forces were locked in an armed standoff Iraqi government troops and allied Iranian-backed paramilitaries known as Popular Mobilization Units (PMUs) on the outskirts of the city. Kurdish leaders were using the strongest rhetoric, saying that Kirkuk would be defended to the last Peshmerga and that if Iraqi forces attack, they would be soundly defeated. So there is a lot of anger today among the Kurds about how this rout could have occurred so quickly, within about 15 hours.

The Kurds took control of Kirkuk in 2014, at a time when the country Iraq seemed to be falling apart, because the so-called Islamic State (IS or ISIS or ISIL or Daesh) defeated the Iraqi army quickly and took control of Mosul, making it ISIS headquarters in Iraq. ISIS also took control of vast swaths of land, including many villages, but it was Kurdish Peshmerga militias that prevented ISIS from taking control of Kirkuk as well.

The Kurds might have been able to retain Kirkuk as part of the regional KRG government, but Kurdish leaders decided to go further and hold a non-binding referendum on September 25 on the question of secession of an independent Kurdish state from Iraq. This referendum went ahead despite almost universal international opposition, as the United States, Turkey, Iran, and Iraq expressed concern that the referendum would create unrealistic expectations and destabilize the region. And that appears to be exactly what happened.

Once the referendum had passed, Iraq’s prime minister Haider al-Abadi said that he had no choice but to order military action to capture Kirkuk and prevent a secession from taking place. The rapid advance of the Iraqi forces resulted in quickly seizing control of the city’s airport, in addition to an oil field, the strategic K1 military base and the Taza Khormatu district southeast of Kirkuk. A convoy of elite Iraqi counter-terrorism unit forces took control of the governorate building in central Kirkuk in the afternoon, meeting no resistance. Iraqi forces also took control of the governor’s office, which had been left deserted.

Al-Abadi said in a statement:

It is my constitutional duty to work for the benefit of the citizens, and to protect our national unity that came under threat of fragmentation as a result of the referendum that was organized by the Kurdish region.

The referendum came at a time where the country is fighting against terrorism that has come in the form of ISIS. We tried to urge (the Kurds) not to violate the constitution and to focus on fighting ISIS, but they did not listen … They chose their personal interests over Iraq’s interests.

By evening, there was an Iraqi victory parade in Kirkuk.

With the approach of the Iraqi forces, thousands of civilians fled Kirkuk and headed for Sulymaniyeh and Erbil in the Kurdish region.

However, other civilians were seen cheering on the Iraqi forces as they entered Kirkuk’s southern outskirts. That is because Kirkuk is a multi-ethnic city, with a population of a million people, roughly 30 percent Kurdish, 30 percent Arab, 30 percent Turkmen, and 10 percent Christian. Al Jazeera and Middle East Eye and Iraqi News

In an article that I wrote two weeks ago, I compared three different independence movements that are currently in the news: in Catalonia from Spain, in the Anglophone Southern Cameroons from Francophone Cameroon, and in Kurdistan from Iraq. As I described, the Kurdistan case is substantially different from the other two. In the other two, there is a resurgence of the extremely vitriolic xenophobic attitudes that gave rise to previous generational crisis wars, and civilians were targeted by government forces. But we saw nothing like that between the Kurds and the Iraqis in the case of the Kurdistan separatist movement in Iraq.

Monday’s events modify that assessment. There was a military clash between Iraqi and Kurdish forces, but it was quick and fizzled quickly. There were no reported atrocities, rapes or mass slaughters that are typical of clashes when vitriolic xenophobia is in play. In particular, Monday’s military clashes did not target civilians.

Instead, what emerged is a major split among the Kurds themselves. There are two major factions in Kurdistan, the Kurdistan Democratic Party (KDP) and the Patriotic Union of Kurdistan (PUK), that were formed in the decades following WW II. During Iraq’s last generational crisis war, the Iran/Iraq war of the 1980s, the KDP was often aligned with Iran, and the KDP and the PUK fought each other. The two parties have had several brief military clashes since then.

On Monday, Masoud Barzani, president of the Kurdish Regional Government (KRG) and KDP leader, posted a tweet accusing the PUK of collaborating with Iran and with Iraq’s Shia militias to defeat the Kurds in Kirkuk.

It seems pretty likely that the hostility between the KDP and PUK is going to grow following Monday’s humiliating defeat in Kirkuk. Al Jazeera and BBC