CBS News reported on Tuesday that evidence existed that American embassy staff in Uzbekistan may have suffered similar symptoms to those targeted by unexplained acoustic attacks in Cuba. State Department spokeswoman Heather Nauert fervently denied that any incident had occurred in Tashkent, the Uzbek capital.

CBS cites “American sources” in their report, who claim that the alleged attacks may indicate that the government of Russia, which has ties to both Uzbekistan and Cuba, could be behind the attacks.

One source told CBS that two American government staffers in Tashkent “suffered similar effects” as those of diplomats targeted in Cuba and were evacuated from the country. The alleged victims had reported “what may have been at least one acoustic attack similar to those experienced by the diplomats in Cuba,” CBS explained, citing a source “familiar with the incident.”

CBS used this information to stop just short of accusing Russia of having orchestrated the attacks in Cuba. “Now, two U.S. security sources say the September incident in Tashkent raises concerns Russia may be involved,” the report notes, “and could have had a hand in the attacks targeting U.S. government personnel in Cuba.”

The Russian explanation would not clarify why Cuba would reach out to a foreign government to conduct such attacks, given evidence that Cuba has long possessed the technology to commit sonic torture. The former Cuban political prisoner Luis Zúñiga told Breitbart News in October that the sounds that diplomats allegedly heard in Cuba resembled what was broadcast in Cuban prison in the 1960s and ’70s through antiquated loudspeakers, and could likely be reproduced with much more sophisticated technology today.

The State Department confirmed this year that up to 25 staffers working out of the recently reopened American embassy in Havana suffered a variety of health symptoms after being exposed to unexplained sounds. While the department did not confirm any of the symptoms, the initial Associated Press report on the matter led to a number of sourced reports suggesting that diplomats and relatives on the island suffered hearing loss, headaches, dizziness, and brain damage, all symptoms that may indicate a link to sonic attacks.

Among those reports was a CBS News claim, quoting individuals who worked at the Havana embassy, who felt that the State Department “ignored” the incidents and were “trying to hide” the damage.

The AP also published audio of the sound diplomats claimed to have heard—a high-pitched extended chirping at a loud volume.

A State Department spokesperson to CBS that they “aren’t going to discuss every case individually” and that the State Department takes its employees’ health seriously. Top spokeswoman Heather Nauert, however, issued a categorical denial that any such incidents took place on Twitter:

We can confirm that there was no incident in Uzbekistan and that no personnel at the U.S. Embassy in Uzbekistan have been diagnosed with the conditions that have been observed in Cuba.

She continued to reply to multiple CBS and other journalists with the same message: “There has been no incident in Uzbekistan.” 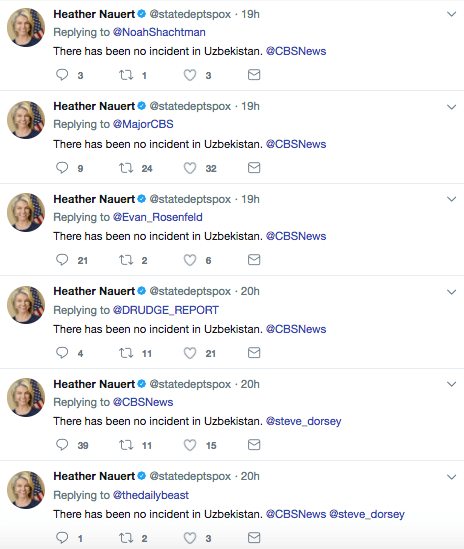 In September, Secretary of State Rex Tillerson announced that America would withdraw all “non-emergency” staff from its embassy in Cuba and expelled over a dozen Cuban agents from the communist government’s Washington outpost. “Until the Government of Cuba can ensure the safety of our diplomats in Cuba, our Embassy will be reduced to emergency personnel in order to minimize the number of diplomats at risk of exposure to harm,” Tillerson said at the time, using the word “attacks” to describe what occurred for the first time.

The Cuban communist regime has denied having executed any “attacks” against the United States, calling the State Department’s claims “science fiction” and asserting that “not a single shred of evidence” existed that the individuals in question suffered harm. Following these vocal denials in October, the Cuban state propaganda outlet Granma published an extensive video claiming that the diplomats had actually heard the sounds in question, but that they were made by insects such as crickets and cicadas.