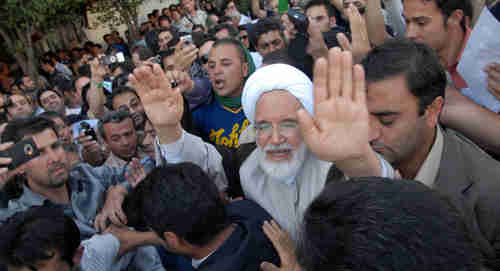 In a move that may not have been good for his continued survival, 80-year-old Iranian reformist Mahdi Karroubi harshly criticized the Supreme Leader Ayatollah Seyed Ali Khamenei in a letter published on his political party’s website.

The criticism comes just one month after nationwide street protests that began as demonstrations against soaring food prices, but then grew into much more serious protests about government corruption among the political élite. It is widely believed that when Iranian sanctions were lifted after the nuclear deal was signed, and Iran received billions of dollars as a result, that money went to élite clerical institutions, at the same time that a banking crisis has caused millions of Iranians to lose their life savings.

As usual, Khamenei blamed the United States, Israel, and other “foreign enemies” for the nationwide street protests. At least 25 people were killed in the protests, and hundreds of peaceful protesters were jailed.

Mehdi Karroubi has been under house arrest for seven years for supporting peaceful protesters during the 2009 election, when Iran’s security forces overreacted and there was blood running in the streets.

Karroubi’s letter to Khamenei was a reaction to last month’s street protests:

I urge you, before it is too late, to open the way to structural reforms of the system.

The system is going downhill to such an extent that it feels endangered by a few thousand people demonstrating.

Instead of repeating accusations of links with the enemy and instead of harsh confrontation, listen to them.

More than 50 percent of the country’s wealth is in the hands of state bodies over which there is no supervision … Poverty and unemployment are plaguing the country.

More than 10 million Iranians, among 80 million, now live in absolute poverty. Under such conditions, it is natural that the lower classes, who were the grassroot supporters of the Islamic Revolution, will turn into a gunpowder barrel.

Karroubi also criticized Khamenei for letting the Revolutionary Guards take a commanding role in the economy as this “has tarnished the reputation of this revolutionary body and drowned it in massive corruption.” Radio Farda (RFERL) and AP and Reuters 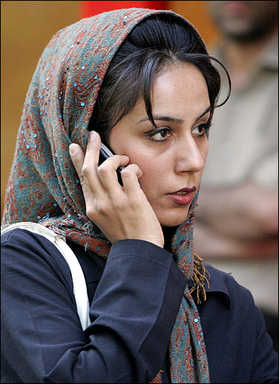 From 2007: An obvious criminal at large on the streets of Tehran (France 24)

There are actually many similarities between America in the 1960s and Iran today. In both cases, there were protests by college students against foreign wars, poverty, and the economy.

One particular feature of America in the 1960s was the “Women’s Lib” movement, where cute, attractive college girls paraded around demanding to be treated the same as men and put on big shows of burning their bras to make the point that there was no difference between the sexes.

Iran’s Awakening era has its own Women’s Lib movement. It started on December 27, just as nationwide street protests were starting, when an unidentified woman climbed on top of an electricity box on one of Tehran’s busiest streets, Enqelab (Revolution) Avenue, removed her headscarf, and began waving it in the air.

A video clip of the woman, later identified as Vida Movahed, a 31-year-old mother, quickly went viral, and that was the beginning of “Girls Of Revolution Street.” Now there is a movement for women to take off their headscarves and wave them in the air in protest of compulsory headscarves and hijabs.

This is anathema to the hardline geezers, who consider a girl without a headscarf to be almost as bad as an infidel. In 2007, Mahmoud Ahmadinejad, Iran’s president at the time, ordered police in Tehran to swoop down on women with loose headscarves and arrest them. In some cases, they were simply warned, but in other cases, they would be piled into a bus and taken to the police station for “questioning.”

Every generational Awakening era has a climax. America’s Awakening era climaxed with the resignation of President Richard Nixon in 1974. Iran’s Awakening era will climax with some sort of regime change that will replace the Khamenei and the other hardline geezers that survived the Great Islamic Revolution of 1979 and are still running the country with a new, younger generation of leaders. And since young people in Iran today tend to be pro-American and pro-Western, and have no desire to push Israel into the sea, expect Iran to become an American ally once the Awakening era climax takes place. Radio Farda (RFERL) and CNN