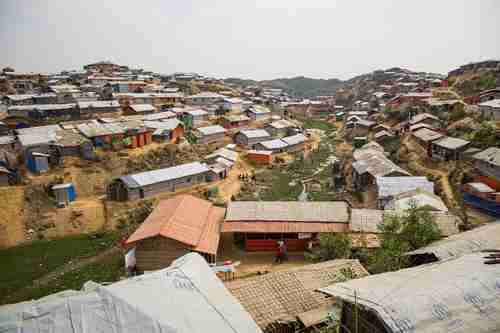 Bangladesh summoned Burma’s (Myanmar’s) ambassador on Thursday as hundreds of Burmese armed soldiers and police came to a border fence near Burma’s border with Bangladesh, and appeared to be moving heavy weapons, including mortars and machine guns, to the area.

The Burmese troops have been surrounding a strip of land dubbed “no man’s land,” because it is beyond Myanmar’s border fence but on Myanmar’s side of a creek that marks the international border. There are about 5,300 Rohingya Muslims living in a makeshift camp in the no man’s land area.

Myanmar’s unexplained military buildup near the Bangladesh border is raising new tensions between the two countries. As Burmese forces have repeatedly conducted mass slaughter and scorched earth operations against Rohingya civilians, it is feared that Burma is about to do it again. Burmese forces have already been using loudspeakers ordering the Rohingyas to get out, and according to some reports have been throwing stones.

After the Bangladesh protest on Thursday, the Burmese forces near the camp withdrew their heavy weapons, but the troops remained, and they began firing live bullets into the air.

Last year, under heavy international pressure, Burma agreed to accept the return of hundreds of thousands of refugees that had fled to Bangladesh. The agreement was farcical in that it is never going to happen. It is like the ceasefire that Russia and Syria agreed to as the exterminate civilians in East Ghouta. These agreements are only used as political cover to continue exterminations, genocide, and ethnic cleansing.

Nearly 700,000 Rohingyas have crossed the border from Burma into Bangladesh in just the last six months. Refugee camps were created for them by stripping the land of trees and other vegetation, to make room for shelters, mostly made from tarpaulin and bamboo.

Aid agencies are preparing in advance by setting up emergency medical centers to prepare for the spread of diseases like diarrhea, dysentery, and mosquito-borne diseases like dengue, malaria, and others. Light machinery will be installed and work crews established at ten strategic points across the district to clear major drains and waterways after landslides and mud cause road closures and blockages.

The Rohingya situation has been mostly out of the news for the last few weeks, but it could escalate to a major new crisis very quickly if Burmese troops commit new atrocities on Rohingyas while the monsoon rains displace hundreds of thousands of them.

Some people claim that Buddhism is a “religion of peace,” despite the massive Buddhist on Buddhist genocide in the Killing Fields of Cambodia in 1975-79. For the last six years, it has been clear that the Buddhists in Burma have been taking lessons from their brethren in Cambodia, and are repeating the Cambodia genocide on the Muslim Rohingyas in Burma. Some people claim that Buddhists are better than Muslims, but from the point of view of Generational Dynamics, there is no difference at all between Buddhists and Muslims except that they use different religious justifications when they exterminate, torture, and commit atrocities on innocent civilians that they don’t like. That’s the way the world works. UN Migration Agency and Reuters and Guardian (London)