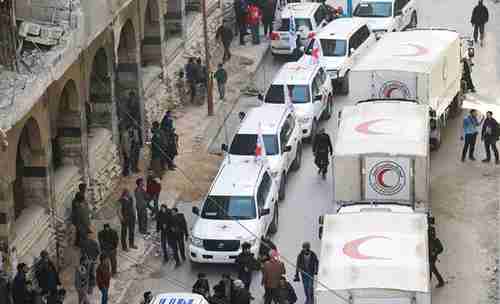 Trucks from humanitarian convoy in Eastern Ghouta on Monday (Reuters)

It was only in the last two weeks that Russia announced that it would permit a “ceasefire” in Eastern Ghouta for five hours a day, from 9 AM to 2 PM. This ceasefire would permit civilians to leave, and humanitarian aid to be brought in.

So here are the results so far:

The humanitarian aid convoy contained 46 trucks. The convoy reached its destination in Douma, in the north of Eastern Ghouta, amid continuing bombing by Syrian and Russian warplanes. The trucks were said to contain food for just 27,500 people, out of the 400,000 people under siege in Eastern Ghouta.

However, not all the food could be unloaded because the convoy had to leave abruptly to avoid incessant bombing by Syrian and Russian warplanes. So Syria prevented even that extremely limited amount of humanitarian aid from being delivered.

There is really nothing surprising about what is going on. During Syria’s siege of Aleppo in 2016, there were similar ceasefires that were not ceasefires, and people who tried to leave were permitted to leave, but then were killed as they were leaving. There was humanitarian aid, but Syria’s army confiscated most of it before it could reach its destination, and on some occasions the humanitarian aid convoy was targeted by Syrian and Russian warplanes. Arab News and Reuters and BBC and AFP

Although Syria’s president Bashar al-Assad considers pretty much all the 400,000 people in Eastern Ghouta to be terrorists, his army is particularly targeting an anti-Assad militia called “Jaysh al-Islam,” or “Army of Islam.”

After al-Assad began targeting peaceful protesters in 2011, and particularly after he massacred thousands of innocent women and children in a Palestinian refugee camp in Latakia in August 2011, anti-Assad militias began to form. These militias were generally very small, but in 2013, Jaysh al-Islam was formed through a merger of about fifty Damascus-based opposition groups. In addition to opposing al-Assad, it was equally opposed to the so-called Islamic State (IS or ISIS or ISIL or Daesh) and was responsible for expelling ISIS from the Damascus area.

The Syrian government now says that its army has reclaimed a third of Eastern Ghouta in the last few days. Furthermore, the army “has been rapidly advancing through the East Ghouta region of Damascus recently, capturing several areas that were under the control of Jaysh Al-Islam,” according to Syrian media.

The current objective of the Syrian army is to split Eastern Ghouta into two pieces so that it is divided horizontally. Syrian media says that the army has taken control of several villages and farms “eliminating large numbers of terrorists and destroying their bases, tunnels, trenches, and ordinance.” If it is successful in splitting the region, then the Jaysh al-Islam in the north will be cut off from supplies, giving the Syrian army control of the northern half. Al Masdar News (Damascus) and Syrian Arab News Agency (SANA) and Mehr News (Iran) and Stanford – Jaysh al-Islam and Deutsche Welle