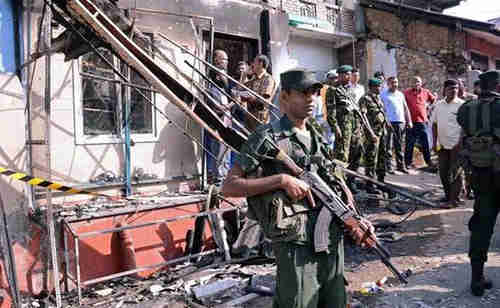 Sri Lanka’s government declared a state of emergency on Tuesday after violent clashes between ethnic Sinhalese and ethnic Tamils began to spread, eight years after the end of an extremely violent civil war between the two ethnic groups.

The sequence of events is as follows:

There has been growing tension and violence between the Sinhalese and Tamil communities, with some hardline Buddhist groups accusing Muslims of forcing people to convert to Islam and vandalizing Buddhist archaeological sites. The Buddhists have also accused the Muslims of refusing to use condoms, so they can have more babies.

It also appears that Buddhist hardliners in Sri Lanka are being influenced by the genocide by Myanmar (Burma) against Rohingya Muslims. That genocide is being led by Buddhist monks, particularly Ashin Wirathu, a Buddhist monk who turned “969” from a Buddhist sign of peace and happiness into a sign of bloody genocide and ethnic cleansing.

Buddhist monks in Sri Lanka are mimicking the genocidal incitement in Burma by using racist hate speech to target Sri Lanka Tamils – most of whom are Hindu. India Today and The Island (Sri Lanka) and UPI

It has only been eight years since the end of the civil war, but we are seeing the very early stages of something that I have described as occurring sooner or later in every country following the end of a generational crisis civil war between two ethnic groups.

Among generational crisis wars, an external war is fundamentally different than an internal civil war between two ethnic groups. In an external war, one country’s army invades another country. When the war ends, the invading army leaves and the two countries continue relations through the United Nations or international or bilateral treaties.

But when an internal civil war between two ethnic or tribal groups occurs and then ends, then the people who killed, tortured, mutilated, and raped each other still have to live with each other, often in the same villages, sometimes on the same street. And so the extreme trauma and bitterness of war continue, even though the war has ended. That is clearly what we are seeing in Sri Lanka. Furthermore, as the young babies and children who were not really aware of the war grow older, they become aware of how much they hate each other, and the violence only grows.

I have written articles about what happens to such countries as the decades pass and new generations grow up during generational Awakening and Unraveling eras. The leaders of the winning side refuse to step down and start using violence and atrocities against civilians to stay in power. These include Paul Biya in Cameroon, Pierre Nkurunziza in Burundi, Paul Kagame in Rwanda, Yoweri Museveni in Uganda, Robert Mugabe in Zimbabwe, Joseph Kabila in DRC, or, outside of Africa, Bashar al-Assad in Syria and Hun Sen in Cambodia.

This has already started in Sri Lanka. Mahinda Rajapaksa was elected president in 2005 but lost the election in 2015. He tried to get the army to overturn the election results but did not succeed in that. But we can certainly expect to see more of that in the future.

It is too early for that to be happening in Sri Lanka because the civil war ended only eight years ago. But it is pretty clear that Sri Lanka is on that path. The current violence will fizzle quickly, but as the young post-war generation grows up, the violence between Tamils and Sinhalese will grow, and the Sinhalese government will begin using violence and atrocities to control the Tamils in the name of national security. Indian Express

North Korea says it will denuclearize if the regime is ‘secure’

The media are all agog about the sensational statement that came out on Tuesday, as a South Korean delegation returned from its meeting with North Korea’s child dictator Kim Jong-un on Monday. According to South Korea’s chief delegator Chung Eui-yong: “North Korea made clear its willingness to denuclearize the Korean peninsula and the fact there is no reason for it to have a nuclear program if military threats against the North are resolved and its regime is secure.”

So North Korean officials have thought about nothing else but nuclear weapons and ballistic missiles for decades, but now they are willing to give them up for some promise of security? I don’t think so.

There is nothing that the US could do to guarantee that would cause the North to say: “OK, now I agree that the military threats are resolved, and the regime is secure.” The North Koreans could make demands – withdraw all troops from South Korea, withdraw all ships from the region, close all military bases around the world, etc., etc., but there would always be new demands. So the whole promise is a scam.

So let’s see where this goes next. Daily Telegraph (Australia)