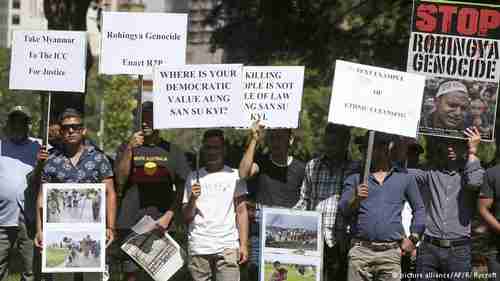 It used to be a rule of the Association of Southeast Asian Nations (ASEAN) that member states are forbidden from interfering in each other’s internal affairs, which means that no member nation is permitted to criticize the internal policies of another member nation. That rule was in place to prevent the group from fracturing, and from discussing happy subjects like trade.

But the extreme genocidal violence and ethnic cleansing of ethnic Rohingyas by the government of Myanmar (Burma) has caused Malaysia’s Prime Minister Najib Razak to denounce Burma’s leader Aung San Suu Kyi personally, in a speech at the ASEAN summit, while she was sitting on the stage nearby. Suu Kyi won the Nobel Peace Prize years ago, back before she turned into, according to some, a modern-day Hitler.

Razak justified his open criticism of Suu Kyi by saying that the situation was a threat to the entire region’s security. In particular, he said that it was encouraging jihadists groups in the region, such as those in the southern Philippine city of Marawi last year, of becoming affiliated with the so-called Islamic State (IS or ISIS or ISIL or Daesh). According to Razak:

Because of the suffering of Rohingya people and that of displacement around the region, the situation in Rakhine state and Myanmar can no longer be considered to be a purely domestic matter.

In addition, the problem should not be looked at through the humanitarian prism only because it has the potential of developing into a serious security threat to the region.

Rakhine with thousands of despairing … people who see no hope in the future will be a fertile ground for radicalization and recruitment by (ISIS) and affiliated groups.

We must be vigilant and increase our collaboration, because the collapse of (ISIS) territories in Iraq and Syria has forced it to go underground and re-emerge elsewhere, especially in crisis zones where it can grow and operate.

We must draw lessons from Marawi and be extremely concerned that at least 10 militant groups in the Mindanao region (of the Philippines) have declared their affiliation to (ISIS).

ASEAN has ten members: Brunei, Cambodia, Indonesia, Laos, Malaysia, Myanmar, the Philippines, Singapore, Thailand, and Vietnam. Australia is not a member, but is hosting the ASEAN summit meeting.

Razak has criticized Suu Kyi in speeches in Malaysia. In 2016 he said to thousands of Malaysians at a rally in Kuala Lumpur:

Razak is under pressure from the hardline Malaysian Islamist group Hizbut Tahrir, who have in the past demanded that Malaysia’s army conduct a jihad against Burma. AFP and Australian Broadcasting

Before Saturday, it was not even certain that Cambodia’s prime minister Hun Sen would show up, since he was apparently furious at learning that there would be large protests of Cambodian-Australians in Sydney. On February 21, he warned protesters not to burn effigies of him, saying:

I will follow you all the way to your doorstep and beat you right there … I can use violence against you.

This threat triggered a mass burning by protesters of effigies bearing Hun Sen’s face. Two weeks later, Hun Sen described the protesters as “crazy and stupid,” and said that they had “fallen into his trap”: “In fact, speaking truly and clarifying for you, you are being tricked by Hun Sen. Do not play with Hun Sen, you are still very weak.”

Hun Sen has been in power for 33 years, since 1985, following the massive Buddhist “Killing Fields” genocide in Cambodia in 1975-79. Led by Pol Pot, this was one of the top mass genocides of the 20th century. The genocide killed something like 1.7 to well over 2 million people, out of a population of 8 million. So around 20 percent of Cambodia’s population were killed, making it possibly the worst genocide, on a percentage basis, of the 20th century.

Hun Sen has remained in power since then, but started becoming a lot more authoritarian after the opposition political party, the Cambodia National Rescue Party (CNRP) almost won the 2013 election, and has become increasingly popular since then.

Fearing that he might be defeated in the 2018 elections, Hun Sen has been targeting CNRP leaders, arresting dozens of them on phony charges. The Hun Sen-controlled Supreme Court last year declared the CNRP to be an illegal political party. In addition, Hun Sen has been brutally suppressing protests, banning all protests and jailing protesters. He’s shut print and radio media sources, and jailed reporters.

One of the lead protesters in Sydney was Bou Rachana, the wife of murdered Cambodian politician Kem Ley, who was killed in Hun Sen’s crackdown.

Cambodia’s parliament has recently amended the constitution to tighten restrictions on voting rights and freedom of association, and a provision that insulting Hun Sen can result in being jailed for five years.

From the point of view of Generational Dynamics, Hun Sen is following exactly the same pattern that many other countries have followed following a generational crisis civil war between different tribes or ethnic groups. After the war ends, the leader of the country, usually from the winning tribe or ethnic group, refuses to give up power, and becomes increasingly violent and authoritarian, using as an excuse that peaceful protests or negative news articles can turn into a new civil war. This excuse provides justification for mass slaughter, rape, torture, mass jailings, mutilations, and so forth. I have described this behavior in Bashar al-Assad in Syria, who has gone to the extent of using Sarin gas and barrel bombs packed with explosives and metal and laced with chlorine gas onto civilian neighborhoods and markets in order to kill as many women and children as possible Other leaders that I have described exhibiting this type of behavior include Paul Biya in Cameroon, Pierre Nkurunziza in Burundi, Paul Kagame in Rwanda, Yoweri Museveni in Uganda, Robert Mugabe in Zimbabwe, and Joseph Kabila in DRC.

This weekend’s ASEAN summit is on economics and counter-terrorism, but the protests are causing those issues to be overshadowed by human rights. According Human Rights Watch:

The ASEAN summit shouldn’t just be an opportunity to dance with dictators, but a chance to publicly press them over horrific human rights abuses.

ASEAN is already divided between countries like Vietnam and Indonesia that oppose China’s illegal creation of a massive military fortress in the South China Sea, versus countries like Cambodia and Laos that support China. Myanmar’s ethnic cleansing of Rohingyas, and Cambodia’s authoritarian slaughter, rape and torture of political opponents are issues that are further splitting ASEAN, leading some to wonder whether it even makes sense for ASEAN to continue to exist. Quartz (15-Mar) and Phnom Penh Post (5-Mar) and Deutsche Welle (27-Nov-2017) and Australian Broadcasting