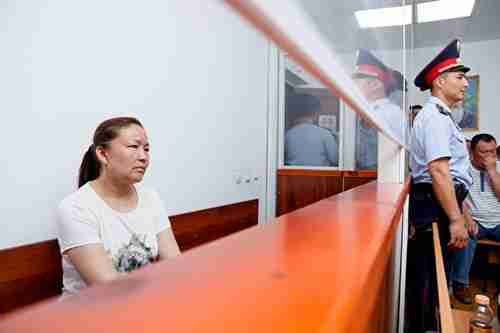 A defector from China on trial in Kazakhstan for breaking the law by crossing the border from China has revealed explosive information about ethnic Kazakhs in China being forced into “reeducation centers.”

This information is explosive for three reasons.

First, China has always denied the existence of “reeducation centers,” although there have been plenty of testimonies and official documents proving their existence. Since 2016, Chinese authorities have ensnared tens or hundreds of thousands of Muslims in Xinjiang province, even foreign citizens, into mass internment camps. The program aims to rewire detainees’ thinking and reshape their identities. Chinese officials say ideological changes are needed to fight Islamic extremism.

Second, the testimony revealed that China is forcing thousands of ethnic Kazakhs into these reeducation centers. This is polarizing the Kazakh public against China at a time when the Kazakh government is trying to convince China to invest more money in Kazakhstan infrastructure projects.

Third, China is demanding that the defector be returned to China. If she is returned to China, then she would be killed or permanently “disappeared,” and the Kazakh “people will say the government cannot protect its own people,” according to an activist. If she is not returned, then the Chinese will be furious, and the investments might be in jeopardy. AFP

The explosive testimony: thousands of Kazakhs in China’s reeducation camps

The defector is 41-year-old Sayragul Sauytbay, an ethnic Kazakh who is a Chinese citizen. She had been working as a Kindergarten teacher in China for several years. According to her public testimony, she was forced to work in a camp system in Xinjiang region, which is heavily populated by Muslims. Her testimony became explosive when she said:

In the center where I was, there were more than 2,500 ethnic Kazakhs. And I know that in that region, there were several other similar camps.

According to news reports, everyone in the courtroom gasped when she said this. The exceptions were two men who had arrived from the Chinese embassy to watch the trial, and who remained silent.

She testified that she was arrested and sent to a camp after her husband and children returned to Kazakhstan, which the Chinese authorities consider to be suspicious behavior, even though it had been commonplace for years:

In 2018, they sent me to work in a political reeducation camp in the mountains. Officially, this is a training center where people study Chinese ideology. But in reality this was a prison.

Unlike Uighurs, ethnic Kazakhs had long moved freely between China and Kazakhstan, and there are some 200,000 ethnic Kazakhs in Xinjiang. However, the freedom to move back and forth disappeared late in 2016 in a crackdown by Chinese authorities, who took the unprecedented step of requiring all Muslims to turn in their passports. This meant that anyone who wanted to travel back to Kazakhstan had to file an official request, and hope for approval.

At the time of the crackdown, Sauytbay’s husband and children were in Kazakhstan. According to her testimony, she was not allowed to return to Kazakhstan but was “tricked” into working in the re-education center, where she lost contact with her family.

Finally, on April 5 of this year, she used forged documents to illegally cross from China into Kazakhstan in order to reunite with her family. On May 22, she was arrested by the National Security Committee, the successor agency to the Soviet KGB.

I fully accept my guilt and I am willing to endure any punishment. I only ask one thing – that you do not send me to China. A death sentence awaits me there.

Since she has admitted guilt, the government is faced whether to decline to deport her, and anger China, or to hand her over to China, which may trigger anti-government riots and demonstrations in Kazakhstan.

For two decades, Kazakhstan’s government has cast itself as a protector of Kazakhs abroad. It now must take a tough stand or lose credibility with the domestic population. At the same time, when China might have expected to gain real influence in Kazakhstan, the court trial is going to make that almost impossible in the near term. The Kazakh people are also extremely suspicious of Russians.

As we reported in April, Kazakhstan is already permitting America to use Caspian Sea ports to supply military in Afghanistan, a move opposed by Russia because it changes the balance of power in Central Asia.

With nationalism and xenophobia towards both Chinese and Russians increasing, Kazakhstan may have to seek friends and allies elsewhere, perhaps in the West or in the Muslim world. EurasiaNet and Jamestown

According to a Congressional report in April of this year, re-education centers are prisons where torture is standard:

There are credible media reports that as many as 500,000 to a million people are or have been detained in what are being called “political education centers,” the largest mass incarceration of a minority population in the world today. Thousands are being held for months at a time and subjected to political indoctrination sessions. Many have reportedly been detained for praying, wearing “Islamic” clothing, or having foreign connections, such as previous travel abroad or relatives living in another country. Reports have emerged of the deaths of detainees in these centers, including the death of a well-known Muslim religious scholar who may have been held in such a facility, and there are reports that torture and other human rights abuses are occurring in overcrowded centers secured by guard towers, barbed wire, and high walls.

Survivors of these re-education camps have described starvation, torture and a system of indoctrination akin to what China saw at the height of the Cultural Revolution. Sauytbay said inmates are required to read ideological literature, memorize the national anthem and study Chinese. Detainees are predominantly Uyghurs and Kazakhs, whose cultural distinctness is taken as a sign of “lack of patriotism.”

Another ethnic Kazakh named Omer has described how he was constantly tortured, including the following:

There, he and 40 people were locked in a room. I get up every morning and I sing “red songs”, they have to learn Chinese and Chinese history, especially how the Communist Party “liberated” Xinjiang. Before eating, you should shout “thank you for the party” and so on, when you are in class, repeat the slogan several times.

The Chinese can be pretty stupid, but it is hard to believe that even they are stupid enough to believe that the above actually works. No wonder the Kazakhs, Uighurs, and Tibetans all hate the Chinese and certainly do not consider them to be “liberators.” US Congressional-Executive Commission on China (3-Apr) and Epoch Times (19-Jul)