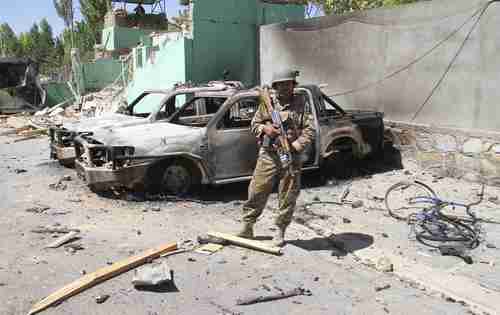 Ashraf Ghani, the president of Afghanistan, gave an Independence Day speech on Sunday announcing a ceasefire with the Taliban on the condition that the Taliban also announce a ceasefire.

The ceasefire is to begin on Monday, the first day of the Eid holiday, and is to end on November 19, which is Mohammed’s birthday.

President Ghani further added that peace is one of the main demands of the nation. He said it would not be acceptable that there would be ceasefire in part of the country while that conflict would continue in its other parts.

U.S. Secretary of State Mike Pompeo issued a statement approving of the ceasefire, and saying “It is time for peace”:

The United States welcomes the announcement by the Afghan government of a ceasefire conditioned on Taliban participation. This plan responds to the clear and continued call of the Afghan people for peace.

There are no obstacles to talks. It is time for peace.

Pakistan’s Foreign Office issued a statement saying: “Pakistan fully supports all such efforts that contribute to achieving durable stability and lasting peace in Afghanistan. The people of Afghanistan deserve it.”

It sounds like peace for our time. I hope everyone in Afghanistan can now go home and get a nice quiet sleep. Khaama News (Afghanistan) and Reuters and Dawn (Pakistan)

Taliban says no peace in Afghanistan until foreign ‘occupation’ withdraws

This was the week that the Taliban surprised government forces and captured the strategic town of Ghazni long before the Afghan army could react. It took almost a whole week to recapture the town, and that was possible only because they were supported by U.S. warplanes that conducted dozens of airstrikes.

Even today, Ghazni is still unsafe, with the roads peppered with unexploded IEDs (improvised explosive devices) and mines.

The Taliban conducted numerous other operations across the country in the last week alone. This is the middle of the annual Taliban fighting season, and the Taliban are in the ascendant, and so it is very unlikely that the Taliban will agree to a three-month ceasefire.

The Taliban have said for years that they will never negotiate with the “corrupt regime”: the Afghan government. They are demanding negotiations with the American military, with the objective of the negotiations to be the full withdrawal of the “occupying forces,” the U.S. and NATO forces.

On Saturday, just hours before Ghani announced the supposed ceasefire with the Taliban, Taliban leader Hibatullah Akhundzada issued a statement repeating all their demands:

Afghan Mujahid Nation! This year’s [Eid holiday] approaches us as our Jihadi struggle against the American occupation is on the threshold of victory due to the help of Allah Almighty. The infidel invading forces have lost all will of combat, their strategy has failed, advanced technology and military equipment rendered useless, sedition and corruption-sowing group defeated and the arrogant American generals have been compelled to bow to the Jihadic greatness of the Afghan nation.

Bringing peace and security is from among the highest priorities of the Islamic Emirate, but peace will remain elusive during an occupation and neither is salvation possible without the establishment of an Islamic authority.

This war that is has been called the longest, costliest and most futile war in American history, plunged the entire region and the world including Afghanistan into insecurity and chaos.

A war that has cost Americans loss of security, prestige and mental wellbeing globally and even inside America itself.

But the Islamic Emirate continues to call America towards understanding and sound logic instead of force and points them towards options that can guarantee the secession and end of this long war, and that lone option is to end the occupation of Afghanistan and nothing more.

The regime based in Kabul and forced upon the Afghan people at the expense of huge American military, financial and human loss has disappointed American officials and they have lost all trust in the regime due to corruption, incompetency, impotence and failure.

Even now if they show readiness for direct dialogue with the Islamic Emirate by accepting the ground realities of Afghanistan, we will view it as a sound step by America.

Sincere, transparent and result-oriented negotiations are an important part of our policy, But negotiations must be sincere and productive free from any fraud and deception and must revolve around the core issue and not be used for propaganda or misleading the common thinking.

The statement goes on to give additional demands for negotiations with the Americans, and for American withdrawal.

Each time I write an article about the Afghan war, it seems more and more like a Gothic fantasy. Ghani’s statement and Akhundzada’s are so completely out of touch with one another, that it seems clear that they can only be play-acting. Pompeo’s statement that “It’s time for peace” seems even more surreal. And the statement from Pakistan’s foreign office seems to be mocking and making fun of all of them. Ghani and Pompeo are not stupid men, so there is no chance that they believe anything they are saying.

And we have not mentioned ISIS-K, the Afghanistan branch of ISIS, which is not included in the supposed ceasefire.

The only thing that makes sense is the larger strategy for the region. If America withdraws, it would destabilize the region and would be a political disaster for the American administration. The larger picture is that Donald Trump and the military understand that this war cannot be won, but they also understand that war with China and Pakistan is approaching. As war with China and Pakistan approaches, President Trump wants to keep American troops active in Afghanistan and to continue to maintain several American military bases in Afghanistan, including two air bases in Bagram and Kandahar International Airport. These bases will be valuable in any future war with China. Under these circumstances, having troops in Afghanistan is what matters, whether the Taliban are defeated or not. Tolo News (Afghanistan) and Long War Journal and Long War Journal