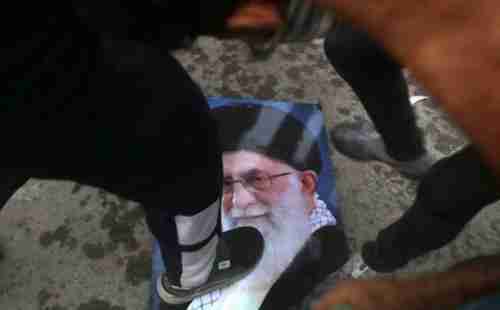 Riots have continued for five days in Basra, currently Iraq’s second largest city after the destruction of Mosul, in southern Iraq. Protesters have attacked or set fire to nearly every government building, including the headquarters of the Iran-linked ruling Dawa Party and the offices of the state-run Iraqiya TV station as well as the Iranian consulate. They also attacked almost every office belonging to the Iran-backed Shia militias known as the “Popular Mobilization Forces” or “Hasheed.” At least 15 people have been killed in the riots in the last week. On Saturday, assailants fired Katyusha rockets at Basra airport.

There have been occasional anti-government protests in Basra for years. The latest protests were triggered by brownish water coming out of the water taps, making people sick who try to drink it, and by a crippling electricity shortage at a time when temperatures are reaching 120 degrees Fahrenheit during the day.

By Saturday afternoon, Iraqi security forces and troops began deploying in the center of Basra and on street intersections. Dozens of gun-mounted black pick-up trucks belonging to the Interior Ministry and carrying masked security forces in combat fatigues were seen. Iraqi News and AP and Vox and CNN

Basra is home to some of the largest oil fields in Iraq. These oil fields are contributing enormously to Iraq’s economy, but none of the money seems to help Basra. Basra used to be called the “Venice of the East” because of its network of waterways and canals, which should be providing it with plenty of fresh water. But the canals were bombed by Iran during the 1980s Iran-Iraq war and have not been repaired since then.

Most Iraqis are Shia Muslims, with Sunni Muslims in the minority. After the war, Saddam Hussein, a Sunni Muslim, neglected and marginalized the mostly Shia Basra population, causing considerable dissent. When Saddam was deposed by the 2003 American invasion, an Iran-linked Shia government came to power and they have also largely neglected and marginalized the Basra population. The Basra Shias have returned the favor by forcing the few Sunnis living in Basra to leave.

Although the split between Sunni and Shia Muslims is a defining feature of the Mideast, there are also ethnic alliances that override the sectarian fault lines. Iraq had two generational crisis wars during the last century, the 1920 Iraqi Revolution and the 1980s Iran-Iraq war. In both of those wars, the Iraqi Sunnis and Shias united behind the war effort against the enemy: the British colonists in 1920 and the Iranians in the 1980s. So even though the Muslims in Basra are Shia Muslims, they have bitter memories of the atrocities committed by the Iranians in the 1980s. Those bitter memories are revived every time someone is killed by a landmine planted by Iran during the 1980s war.

So the current riots in Basra are about more than drinking water and electricity. There is a great deal of fury directed at Iran’s “meddling” in the current government, which is in a state of chaos anyway.

Politicians in Baghdad have not agreed on a government following inconclusive elections in May. The new parliament met for the first time on Monday, but failed to elect a speaker, much less name a prime minister, so the former prime minister, Haider al-Abadi, continues in power. Parliament convened an emergency session on Saturday to discuss the crisis in Basra, but no action was taken.

When Ruhollah Khomeini set up his Islamic Revolutionary government after Iran’s 1979 civil war, he reinterpreted centuries of Shia theology to include a doctrine called Wilayat al-Faqih, which means Guardianship of the Jurist. The effect of this doctrine was that the Supreme Leader was considered to be as infallible as the 12 infallible Imams that had led Shia Islam over a millennium ago. This meant, of course, that Khomeini was the infallible leader of all Shia Muslims.

Needless to say, Shia Muslims in Iraq do not accept Khomeini or the current Supreme Leader, Seyed Ali Hosseini Khamenei, as infallible leaders. So the doctrine of Wilayat al-Faqih (Guardianship of the Jurist) is rejected by Iraq’s Shias in Basra, and so Iran’s Shiism and Iraq’s Shiism are effectively two different sects.

This difference goes to the core of the protests, as the government in Baghdad is linked with Iran and Iranian Shiism. This will have to be settled as part of the resolution to the current riots. Reuters and Al Monitor and Middle East Eye (16-July)