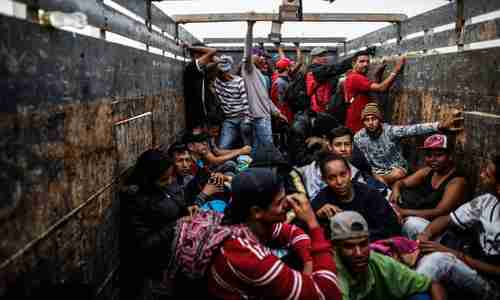 Venezuelan migrants travel aboard a truck in Tumbes, Peru, near the Ecuador border, on November 1. (AFP)

The socialist poster child, Venezuela, is facing mounting crises as the country continues to crumble. Socialism has been a disaster every time it has been tried, whether it has been abandoned – as in North Korea, Sweden, Russia, China, Cuba, or East Germany – or where it has been allowed to lead to total financial disaster, as in Venezuela.

In Venezuela, the refugee crisis and the economic crisis continue to reach fresh levels while the overweight socialist president, Nicolás Maduro, who stuffs himself while his people starve to death, shows no hint of wanting to abandon the disaster.

What is truly amazing and even record-setting is that Venezuela should be the richest country in Latin America with the largest oil reserves in the world, and yet faces a shortage of gasoline of 80 percent.

Venezuela has 18 refineries throughout the world and six in national territory, but many of the refineries are in disrepair and, even when they are working, they have no oil to refine. One of the main refineries, Amuay, is operating at just 5.4 percent of production capacity.

Instead, what oil is available is sent to Cuba or China. According to one worker representative, oil is being sent to China rather than being refined:

There was an order from Nicolás Maduro to the Minister of Petroleum, Manuel Quevedo, to send one million barrels of oil to China. They stopped the refineries and loaded the barrels. It is even more than the amount that they send to Cuba.

Since the beginning of the year, Maduro has sent over 11 million barrels of oil to Cuba. Just between June and August, Maduro sent 4.19 million barrels, worth $248 million. If I understand this correctly, it means that Cuba is now bailing out Venezuela, just as Venezuela used to bail out Cuba.

It is noteworthy that while both Cuba and China call themselves socialist countries for public relations purposes, both countries have somewhat given up socialism and have opened up their markets. For these countries, socialism has simply turned into a religion. That is why these countries are able to make money, which Venezuela is not. Reuters and Today Venezuela and Guardian (London)

According to the United Nations, the number of migrants fleeing Venezuela’s socialist poverty and violence has now surpassed three million. Of the three million, 2.3 million have left Venezuela since 2015, and the number keeps increasing, with 3,000 new arrivals into Colombia every day.

One priest in Colombia took a swipe at America: “People go crazy over the caravan of Central Americans entering Mexico, trying to reach the U.S. That’s four, five, maybe 6,000 migrants, that’s how many we get every four days.”

The rate of migration has sped up in the past six months. The new figures show that about one in 12 of the population has now left the country, driven by violence, hyperinflation, and shortages of food and medicines. Al Jazeera and Guardian (London)