WASHINGTON, DC — A group of Iraqi Yazidis rallied outside the White House over the weekend to urge U.S. President Donald Tump’s administration to help them rescue the estimated 3,000 Yazidis who remain missing or in Islamic State (ISIS/ISIL) captivity and to protect their homeland in Iraq.

Citing the recent beheading of 50 Yazidi women at the hands of ISIS in the group’s last remaining stronghold in Syria, the demonstrators also noted that they want to bring awareness to the “ongoing genocide” afflicting the ethnoreligious Yazidi minority group in Iraq. 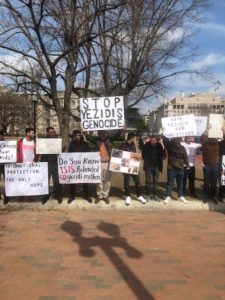 For anyone who is not familiar with what the Trump administration has done to help the Yazidis, you would think the president has done nothing to assist them based on the chants during the protest.

With Yazidis yelling — “Trump where are you?” — in the background during Friday’s demonstration, however, Yousif Haskan, a Yazidi activist who helped organize the rally, admitted to Breitbart News that the Trump administration has done more to help the minority group than its predecessor.

Former President Barack Obama cited the “barbaric” acts against the Yazidis trapped in Sinjar Mountain when justifying the start of the U.S.-led war against ISIS in Iraq back in August 2014, but the minority group continued to suffer, even forgotten at times.

This week, U.S. officials from the Pentagon, U.S. Department of State (DOS), and U.S. Agency for International Development (USAID) told Breitbart News that the issues raised by the demonstrators have not fallen on deaf ears during Trump’s tenure.

“We want to convey a message for people in America and this administration that genocide is still going on against Yazidis [or Yezidis], Christians, and other religious minorities. The genocide is not over. It’s not like you can drop bombs and that’s it. It’s going on. Right now we have 300,000 displaced Yazidis still living in refugee camps for the last four-five years,” Haskan told Breitbart News. 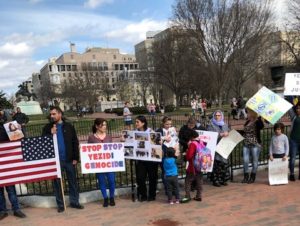 “ISIS is near its end thanks to the U.S. and as a Yazidi, we are thankful to the U.S. for killing and destroying ISIS,” he also said, adding, “ISIS was not just a storm, it’s still here. People are suffering. We see thousands of women are still missing and not returning home and that is really touching us.”

He urged the Trump administration to intensify its efforts to end the “ongoing genocide” against Yazidis.

However, Trump officials told Breitbart News the U.S. military is actively working to keep them and other Iraqis safe while other officials continue to work on locating and rescuing the thousands of missing Yazidis.

“While we will never be able to truly replace what Yazidis and other victims of genocide have lost, the US Government can be proud of what we have done, and will continue to do on behalf of the American people,’ an official from the United States Agency for International Development (USAID) told Breitbart News on condition of anonymity.

Haskan argued that U.S. assistance had not reached Yazidis on the ground.

However, the USAID official provided Breitbart News with a list of nearly 40 planned, completed, and ongoing projects in the Yazidi homeland of Sinjar in Iraq, including efforts to help support “severely traumatized victims of ISIS through…comprehensive medical, psychosocial, and legal services and livelihood activities” as well as “improved sanitation facilities in healthcare centers” and other infrastructure projects.

There is even a program to “distribute cash assistance to vulnerable households to Planned address critical humanitarian needs.”

Since Trump took office, USAID has awarded $300 million to assisting persecuted religious and ethnic minorities in Iraq who suffered genocide at the hands of ISIs, including Yazidis.

“I would say in terms of funding and you know awarding funding and bring more attention it’s the Trump administration [that’s done more to help Yazidis],” Haskan told Breitbart News.

“For example, one of the people we really appreciate his efforts to help Yazidis in general and the Christian minorities is Vice President Mike Pence. He’s been very welcoming to every Yazidi,” he continued. “He is amazing. We never saw something like this before from any other administration. This guy cares. He’s there for us.”

Despite the U.S. funding and the return home of some Yazidis, an estimated 3,000 members of the minority group, mainly women, remain missing or in ISIS captivity and Sinjar is still vulnerable to attacks.

“Thousands of Yezidis have been rescued or have escaped since their capture in 2014. We have been working to provide them with psychosocial and other assistance they need to begin to rebuild their lives,” a spokesperson for State told Breitbart News on condition of anonymity.

“We will continue to look for every opportunity to help find the remaining captives and to assist those under threat from ISIS and subject to its barbaric and inhumane captivity,” the official added.

The Pentagon pledged to continue to work to keep all Iraqis, including the Yazidis, safe. There are an estimated 5,000 American troops in Iraq.

“U.S. forces are in Iraq at the invitation of the Government of Iraq as part of international Coalition efforts to provide training and assistance to Iraqi Security Forces as they work to dismantle ISIS’s network and bring greater stability to the Iraqi population as a whole, including the Yazidis,” Commander Sean Robertson, a spokesman for the Pentagon, told Breitbart News.

When ISIS captured the Yazidi enclave town of Sinjar in Iraq back in 2014, the terrorists executed an estimated 500 people, including children, and took thousands of women and girls as sex slaves.

Moreover, the terrorist group ultimately indoctrinated kidnapped children into hating their ethnicity and become the next generation of jihadis.

Breitbart News spoke to several of the demonstrators who stressed the “ongoing genocide” facing the Yazidis even as the group’s so-called caliphate falls.

I’m mainly here for the Yazidis to bring more attention to the ongoing Yazidi plight. Me myself I’ve lost two members of my family — my father and uncle have been beheaded by ISIS. The Islamic State persecuted my family and friends they gave them two choices — convert or be killed,” Faerie Gawri Aldakhi, a Yazidi demonstrator, told Breitbart News. 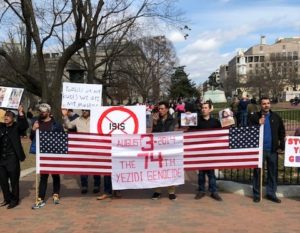 Although ISIS is no longer kidnapping people, thousands of Yazidis remain in their captivity, and they are using them as human shields, according to the demonstrators.