The coverage of the 75th anniversary of D-Day has been heartening, and oftentimes, it’s been inspiring.

Indeed, as a matter of American continuity, as well as comity, it was especially pleasing to see the 45th president paying tribute to the 32nd president; that is, Donald Trump onstage, reading aloud part of Franklin D. Roosevelt’s D-Day prayer, broadcast to the nation, 75 years ago.  (This author has long argued that a proper appreciation of World War Two, in all its mutuality and all-in spirit—from the commander-in-chief in the White House, whose own four uniformed sons were all in or near combat, to the humblest GI, to Rosie the Riveter on the homefront—would yield, today, a better American politics.)

What President Ronald Reagan said at Normandy on June 6, 1984, about the intrepid Rangers who took Pointe du Hoc, applied to all the Allied forces that day: “These are the champions who helped free a continent.  These are the heroes who helped end a war.”  Indeed, it’s now commonly acknowledged that Reagan’s speech helped rekindle interest in World Wars Two; it was on that trip, for example, that Tom Brokaw was inspired to write his watershed tribute, The Greatest Generation.

Yes, D-Day was all that.  So it was entirely fitting and proper that the world gathered to honor that great moment in history, when Hitler’s “Atlantic Wall” was finally breached.

Still, what’s also striking is how relatively inexpensive the battle was.  That is, the Allies won a resounding victory with comparatively few losses; on D-Day, they suffered “only” 4,414 dead and about 10,000 casualties overall.

To be sure, every life lost life is a tragedy, leaving behind tears and mourners.  And yes, the losses on D-Day seem enormous by the standards of today.  Yet still, in the context of the time—the U.S. suffered 407,000 fatalities during the whole of World War Two—they were sadly acceptable. 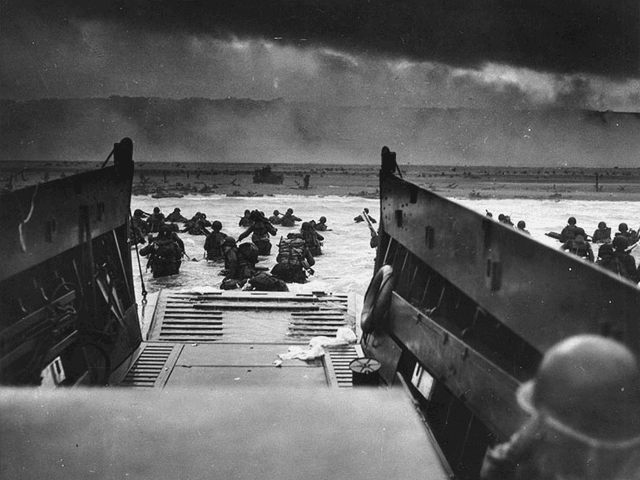 For further purposes of comparison, we might observe that total German combat casualties in the war were at least four million, and Soviet military deaths, at least eight million.  (It’s impossible to be more precise than that, because millions of soldiers from each country died in POW camps, and such deaths can’t be tallied as battle-related.  And for both countries, millions of civilians, too, perished.)

Yes, the harrowing opening scene in the 1998 film, Saving Private Ryan, has stamped Omaha Beach, in particular, as a slaughter—and it was.  Yet the same could be said of any battle in World War Two, including, to cite just one, the Battle of Tarawa in the Pacific.  Bullets are bullets, and artillery is artillery, and as a general from an earlier era, William Tecumseh Sherman, said so succinctly, war is hell.

So now we might ask: Why was it that D-Day was so successful?  Further, and perhaps even more urgently, we might ask: What lessons does that success offer us today, as we think about the possibility of other conflicts—as, regrettably, we must?

One lesson is the value of planning.  As the commanding general of D-Day, Dwight Eisenhower, always maintained, plans often become useless in battle—because the battlefield is so dynamic.  However, Ike continued, planning is essential, because in a dynamic situation, soldiers must be able to shift from one plan to another, all the while maintaining discipline and a fighting spirit.

In planning for D-Day, Ike’s team made careful maps, laying out the path for huge convoys–some 7,000 ships in all—to cross the English Channel and put ashore 156,000 men and 10,000 vehicles.  Did the plans change under fire?  Of course.  Did Americans and their allies adapt?  Yes, to that, too, and the result was triumph.

A second lesson is the value of overwhelming force.  It’s been estimated, for instance, that the Allies enjoyed 30:1 air superiority over the Luftwaffe.  This aerial advantage was made vivid by the quick blunting of the German armored counter-attack at Mortain, France.  After that decisive defeat, the Nazis gave up any real thought of offensive military operations when the Allies were afforded good flying conditions; in other words, for the rest of the war, Hitler’s forces were almost always on the defensive.

(Here, the author wishes to pay tribute to his great uncle, First Lieutentant Edwin H. Pinkerton, a P-51 pilot with the 353rd Army Air Force Fighter Squadron, who was 24 when he was killed in action over France on August 7, 1944.)

In other words, if you want to win a great battle, bring your strength.  To that end, the U.S. produced some 300,000 aircraft in World War Two, including more than 99,000 fighters.  Those were the days when Americans said, “Can Do”—and they weren’t kidding.

And so we come to the third lesson, which is just as relevant to our time—namely, the decisive value of a strong domestic industrial base.

It takes nothing away from the heroes of D-Day to recall that they were backed up by the righteous industrial might of the greatest economic producer in the world.  And that was true during World War Two because it was true before the fighting had even started.

Yes, the key point is that the U.S. possessed the largest industrial capacity prior to the combat.  In 1939, when Hitler started World War Two in Europe, the U.S. produced more than 51 million tons of steel, which was more than twice the German total.  In other words, Uncle Sam’s pro-industry policies, going back to the days of Alexander Hamilton, were paying off; the reason we could bury our enemies under typhoons of steel is because we had the steel with which to bury them.

Indeed, it should also be noted that during the war, U.S. steel production surged, while German steel production plummeted, mostly because of our intensive bombing campaign.  You see, in addition to our enormous steel capacity, we also boasted enormous aluminum capacity, as well as all the knowhow of aircraft construction—and that’s how we built more than 53,000 bombers.  (And yes, of course, our gallant aviators were the tip of the spear; more Army airmen, in fact, died in the skies over Europe than Marines died in the Pacific.)

This last lesson, about industrial capacity, is critical, as we confront at least the possibility of a conflict with China.  Yes, of course, we must hope and pray that conflict can be avoided, and yet at the same time, we should mind the wisdom of the ancient Roman strategist Publius Flavius Vegetius Renatus: Si vis pacem para bellum. If you want peace, prepare for war. 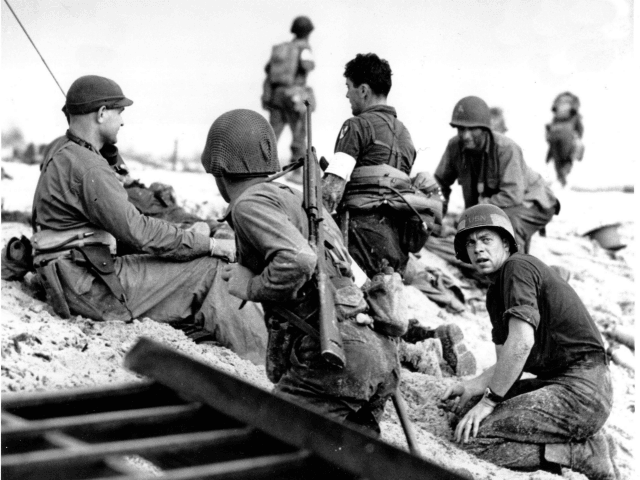 In this June 6, 1944 file photo, first wave beach battalion Ducks lay low under the fire of Nazi guns on the beach of southern France on D-Day, June 6, 1944 during World War II. One invader operates a walkie talkie radio directing other landing craft to the safest spots for unloading their parties of fighting men.  (AP Photo/File)

Of course, today, steel, while still a vital measure of national strength, is less central than it was 75 years ago—and that’s a good thing, because China produces more than ten times as much steel as the U.S.

Instead, today, probably the most vital military ware is electronics, typically known as information and communications technology (ICT).   So now, if we follow Vegetius’ advice, we must work to maintain our edge in ICT.

Thus  we come to a particular flashpoint in the ongoing cold-war-ish struggle for security and power, namely, the Chinese tech giant Huawei, the predatory behavior of which Breitbart News has covered extensively.

As Breitbart has chronicled, the Trump administration, having broken with the supine behavior of previous presidential administrations, is working to restrain Huawei from further infiltrating Western ICT infrastructure.  So far, at least, the U.S. has had a mixed record of success, because Huawei, directed and subsidized by the Beijing regime, can afford to underbid Western companies for the costly equipment that operates, for example, the next wave of 5G.

So what is to be done?  Just on June 5, conservative thinker Reihan Salam, writing for The Atlantic, urged a more visionary approach, aimed at making sure that America is not beaten out in this vital area.  After weighing various possible scenarios for ICT, Salam concluded:

Alternatively, Trump could commit to a more ambitious strategy of rebuilding the U.S. industrial commons, and perhaps even building up U.S. national champions that can outcompete Huawei in manufacturing networking technology.  In short, he could craft a “Made in the U.S.A. 2025” agenda fit to compete with “Made in China 2025.”

Yes.  ICT might be the new steel, and yet Made in the USA is always the right approach.

As we have seen, consciously calculated homeland production was the platform of our success on D-Day.  And so today, 75 years later, we Americans owe ourselves nothing less.