Pro-democracy candidates in Hong Kong’s weekend elections scored a stunning blowout victory, routing pro-Beijing candidates by winning 389 out of 452 seats in the legislature in a contest with over 70 percent voter turnout.

Democracy activists nevertheless complained of foul play in several races, including efforts by pro-Beijing candidates to rig the election with rewards for those who voted their way.

Palm-sized cards bearing the name of Chen Lihong and her candidate number were given out in Sham Shui Po. Apple Daily also reported similar cards being used to promote Vincent Cheng in Sham Shui Po and Cheung Pui-kong in Sau Mau Ping. All three candidates belonged to the pro-government camp.

Local media has also reported incidents of campaigners targeting elderly voters in wheelchairs. Apple Daily reported that two men took a voter in her 80s to a polling station in Kwai Ching, however, the woman later told the journalist that she did not know the men.

In Wong Tai Sin, four people surrounded an elderly voter in a wheelchair and told her to vote for a candidate from the pro-Beijing DAB party, according to Stand News. When asked by the reporter if she understood the purpose of Sunday’s election, the voter said she did not know.

Electoral Affairs Commission (EAC) chair Barnabas Fung said that, as of 3pm, the EAC had received a total of 3,638 complaints primarily to do with voting arrangements.

HKFP noted that offering voters transportation to polling stations is not illegal, but offering them inducements to vote a certain way is. Several videos are circulating that appear to show “goody bags” handed out from vans and buses on election day. The people handing out the bags in each case rejected allegations of vote fraud and said they were handing out gift bags for reasons entirely unrelated to the election, such as charity events.

There were also some complaints lodged from voters who arrived at polling places only to discover their registered vote had already been cast by someone else. 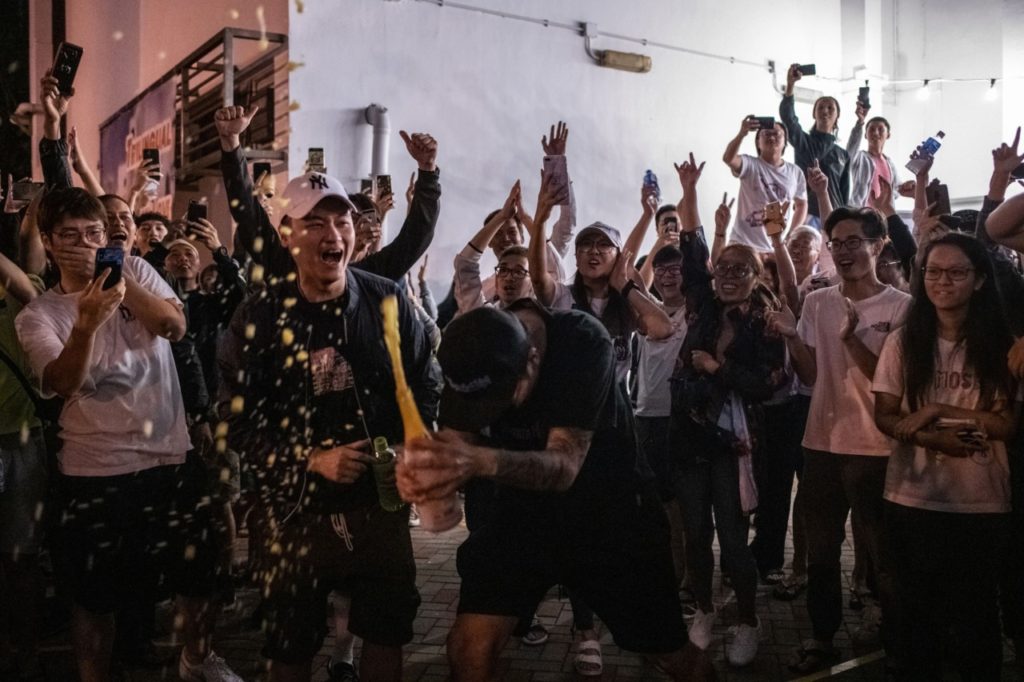 A pro-democracy supporter (C) opens a bottle of champagne outside a polling station to celebrate after pro-Beijing candidate Junius Ho lost a seat in the district council elections in Tuen Mun district of Hong Kong, early on November 25, 2019. – Hong Kong’s voters turned out in record numbers for local council elections that the city’s pro-democracy movement hopes will add pressure on the Beijing-backed government to heed their demands after months of violent protest. Lengthy queues snaked out of polling stations across the territory in the election for 18 district councils, where high turnout is expected to benefit democratic forces. (PHILIP FONG/AFP via Getty Images)

Independent candidate Fung Tak-sum claimed on Monday that he lost an extremely close race against pro-Beijing candidate Kan Ming-tung because over a hundred “problematic ballots” were counted. Kan won the race by exactly 50 votes.

According to Fung, the ballots in question included mistakes such as tick marks drawn in inappropriate locations and multiple ticks drawn inside the voting box. He asked for a review of all ballots after the results were announced, but the Electoral Affairs Commission denied his request. After a recount lasting almost 15 hours while dozens of protesters demonstrated outside, the ballots from the Fung-Kan race were taken away by armed and masked riot police.