Communist China’s oppressive security law for Hong Kong was imposed over the weekend and led to arrests almost immediately as pro-democracy demonstrators flooded the streets.

“We Fear No More!” the protesters chanted as they ignored a police ban, facing down water cannons and chemical sprays. Over 300 arrests had been reported by the Hong Kong police as of Monday morning.

The first person arrested under the new Chinese law was a man waving a Hong Kong independence flag:

#BREAKING: A man was arrested for holding a #HKIndependence flag in #CausewayBay, Hong Kong, violating the #NationalSecurityLaw. This is the first arrest made since the law has come into force. pic.twitter.com/C0ezm3SGDm

CNN reported that at least one other person was arrested under the new law for displaying a pro-independence flag. Several pro-democracy groups have disbanded already, fearing the national security law would be used to persecute their members, while frightened Hong Kongers are tearing down anti-government posters and deleting social media posts that could be used to prosecute them. Protests this week have been impressive given the penalties faced by pro-democracy activists, but they are a fraction of the size of the marches held last year.

The Hong Kong Free Press (HKFP) reported that on Tuesday, as Beijing took the last steps to impose its new security law, an appeal board cited coronavirus public health concerns to uphold a police ban on the annual July 1 pro-democracy march. July 1 marks the day the United Kingdom handed control of Hong Kong over to China. This week marks the first time in 23 years that the police have withheld permission for the march.

At about 6PM, huge crowd chanting at Times Square and attempted to march towards Wai Chai #NationalSecurityLaw #hongkong #hongkongprotests

Undaunted, the demonstrators redoubled their efforts to protest against the new national security law, facing down police armed with water cannons, pepper balls, and pepper spray. The HKFP noted that in addition to the traditional blue and yellow flags they display to alert protesters they have gathered illegally, the police are now waving purple banners warning that pro-democracy assemblies are a violation of Beijing’s national security law and could merit much harsher penalties, possibly including life imprisonment.

The protesters marched right past those new purple banners on Wednesday, chanting traditional slogans like “Five Demands, Not One Less” and singing their anthem, “Glory to Hong Kong”:

At around 2:30 pm, hundreds began to march towards Wan Chai whilst raising their hands up to signal “Five demands, not one less” and chanting slogans including “Fight for freedom, stand with Hong Kong.” Some scattered joss paper – normally burned at funerals – along the roads.

Central and Western District Councillor Fergus Leung told HKFP the July 1 march was significant: “The promulgation of the national security law will lead to white terror in Hong Kong,” he said. “But I believe, from the people you see on the streets today, Hongkongers will not back down in the face of oppression from the Chinese Communist Party.”

He called the earlier arrest of a man possessing a Hong Kong independence flag ridiculous: “The government is not only attempting to control people’s actions but also people’s minds… If China itself is so fragile as to be hurt by a flag, China needs to reflect why it is so fragile.”

There were some reports of vandalism, including damage to stores owned by prominent pro-Beijing businesspeople and a few roadblocks set ablaze. The police said they confiscated some “offensive weapons” from the people they arrested.

Some important figures in the pro-democracy movement were candid about the impossible odds they face now that Hong Kong’s autonomy has been effectively negated.

Lai said he would continue fighting for democracy, but in “a very different way,” wondering “how many of us are left in the fighting camp” now that Beijing has launched its final crackdown on political dissent.

“This is going to be a very different society. I don’t think Hong Kong people, who are used to freedom and rule of law, will be able to adjust,” he said, adding that he personally will remain in Hong kong. 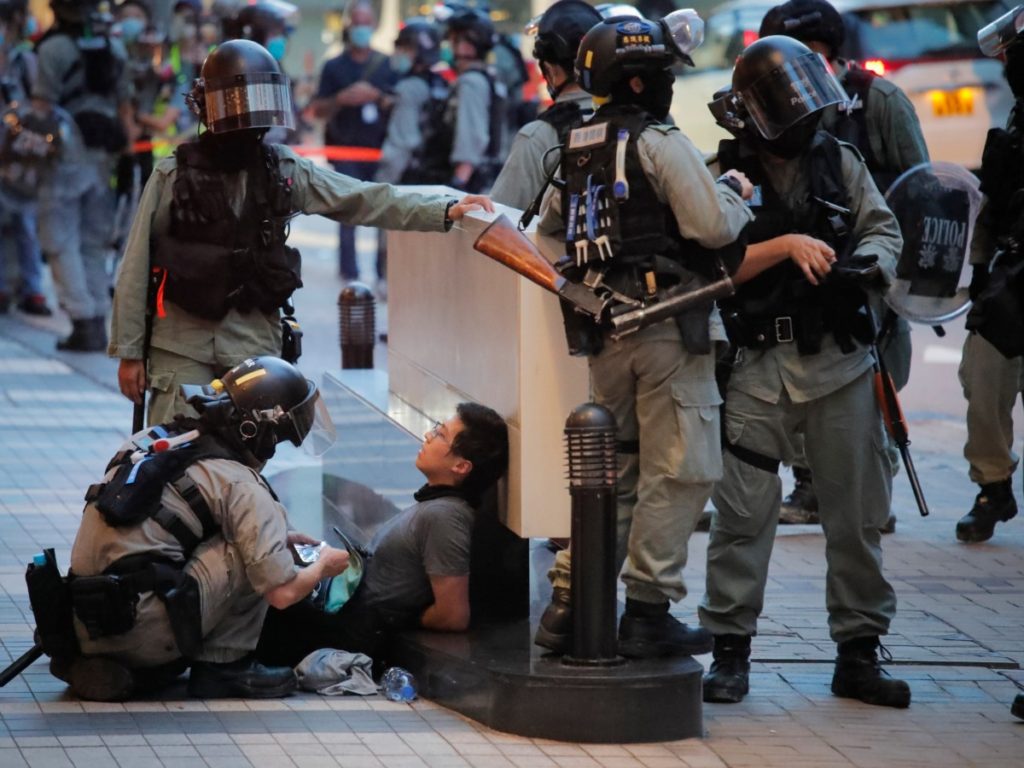 Police detained a protester during a march marking the anniversary of the Hong Kong handover from Britain to China, Wednesday, July. 1, 2020, in Hong Kong. Hong Kong marked the 23rd anniversary of its handover to China in 1997 just one day after China enacted a national security law that cracks down on protests in the territory. (AP Photo/Kin Cheung)

Lai hoped that in the fullness of time, China’s authoritarian model of government would collapse because “dictatorship of such extremes cannot last in today’s world.”

Hong Kong’s Beijing-controlled chief executive, Carrie Lam, defended the national security law by calling it a ”crucial step to ending chaos and violence that has occurred over the past few months.”

“The national security law is the most important development in securing ties between China and the Hong Kong Special Administrative Region since the handover,” she said.