President-elect Biden taught me what it takes to safeguard our national security at the highest levels of our government. Now, he has asked me to serve as his National Security Advisor. In service, I will do everything in my power to keep our country safe.

Sullivan served in the Obama administration and was a close aide to then-Secretary of State Hillary Clinton, allegedly even using a private email address on her illicit and unsecured server, which she kept at her residence, storing classified material.

In 2017, Sullivan testified before the House Intelligence Committee. He admitted telling journalists in 2016 — including Bret Baier and Chris Wallace of Fox News, and “on-air talent” at CNN — that he believed Flynn had colluded with Russia. He also named Carter Page, the Navy veteran and former Trump foreign policy aide who was spied on unlawfully by the FBI.

In one exchange with then-Ranking Member Rep. Adam Schiff (D-CA), Sullivan said he “absolutely” believed that Flynn had colluded with Russia, and added that he believed Flynn had violated the Logan Act, an obscure and rarely enforced law prohibiting private citizens from conducting foreign diplomacy. 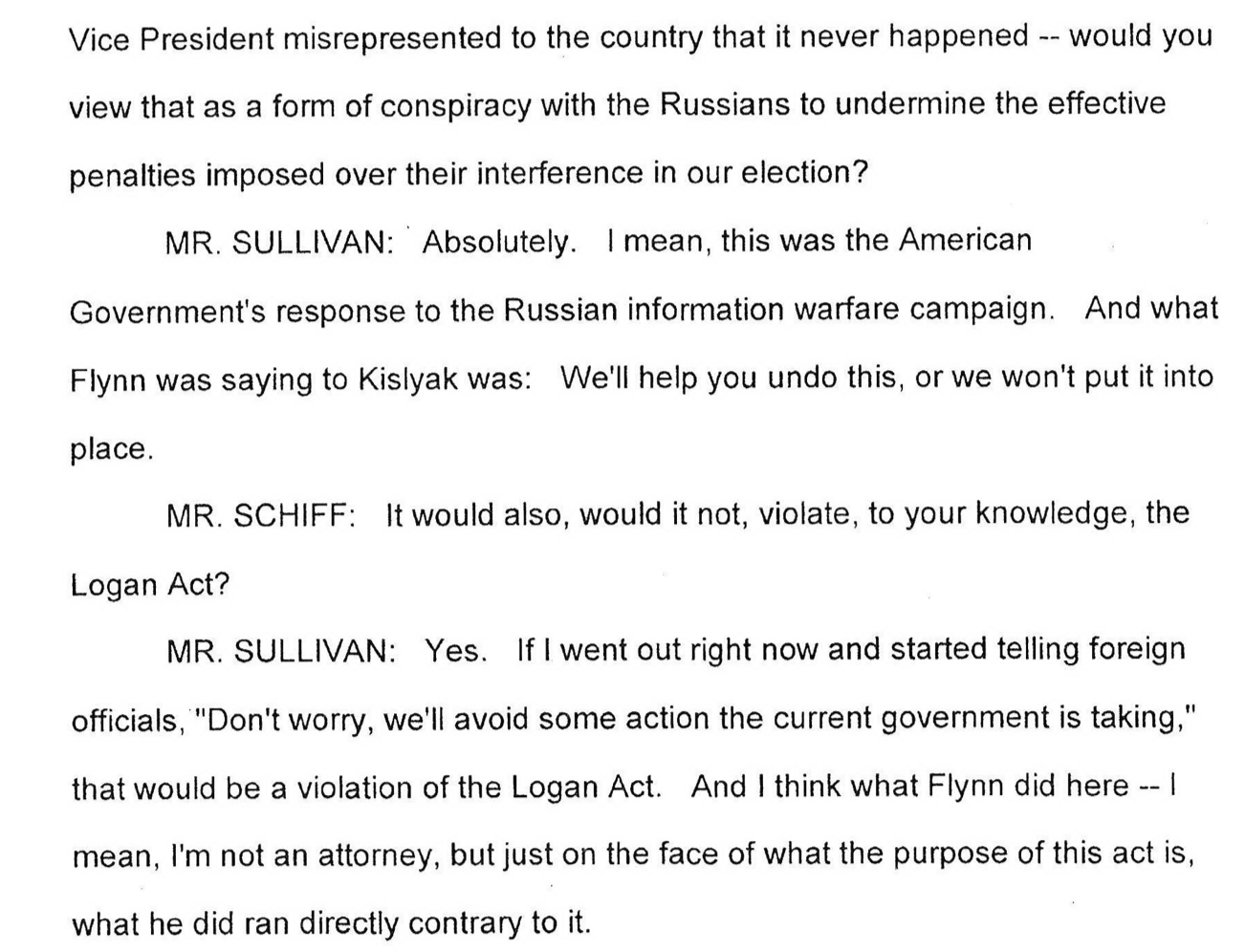 MR. SCHIFF: I will be very quick. I was just going to ask you, given your expertise in foreign policy, about the factual basis for Mike Flynn’s plea, in that he admitted making false statements about a conversation he had with the Russian Ambassador on the subject of sanctions – and this was obviously not public, the Vice President misrepresented to the country that it never happened – would you view that as a form of conspiracy with the Russians to undermine the effective penalties imposed over their interference in our election?

MR. SULLIVAN: Absolutely. I mean, this was the American Government’s response to the Russian information warfare campaign. And what Flynn was saying to Kislyak was: We’ll help you undo this, or we won’t put it into place.

MR. SCHIFF: lt would also, would it not, violate, to your knowledge, the Logan Act?

MR. SULLIVAN: Yes. lf I went out right now and started telling foreign officials, “Don’t worry, we’ll avoid some action the current government is taking,” that would be a violation of the Logan Act. And I think what Flynn did here – I mean, I’m not an attorney, but just on the face of what the purpose of this act is, what he did ran directly contrary to it.

MR. SCHIFF: And the underpinning of the Logan Act is that we should only have one government at a time, is it not?

MR. SCHIFF: And would that be particularly important during a transition period after an election in which a foreign adversary interfered in our election?

MR. SULLIVAN: lt would. And I would say doubly so when the interference in the election our lntelligence Community judged was in part to help one candidate win.

The FBI had used the Logan Act as a spurious pretext to investigate Flynn. He was questioned at the White House in January 2017, at the behest of then-FBI Director James Comey, by agents who told him not to have counsel present. Though agents later reported that they did not believe Flynn had lied to them, he was later fired and prosecuted for lying to the FBI.

FBI notes belatedly produced earlier this year revealed that agents had discussed whether their goal was to have Flynn fired or prosecuted — not to investigate a crime.

Flynn was never prosecuted for collusion. He withdrew his guilty plea for lying to the FBI. The Department of Justice has asked to drop its prosecution, though the trial judge in the case has refused to grant the department’s motion to dismiss.