The Atheists in Kenya society (AIK) announced Saturday the secretary of the organization, Mr. Seth Mahiga, resigned from his post because “he has found Jesus Christ and is no longer interested in promoting atheism in Kenya.”

“This evening, regretfully, our Secretary Mr. Seth Mahiga made the decision to resign from his position as Secretary of our society,” the group said in a tweet. “Seth’s reason for resigning is that he has found Jesus Christ and is no longer interested in promoting atheism in Kenya.”

“We wish Seth all the best in his new found relationship with Jesus Christ,” said AIK founder and president Harrison Mumia in an accompanying press release. “We thank him for having served the society with dedication over the last one and a half years.”

The press release also advertises the resulting vacancy in the organization, inviting prospective candidates to apply for the job.

“We are calling upon Kenyan atheists who would wish to join our Executive Committee to send their CVs to info@atheistsinkenya.org.” 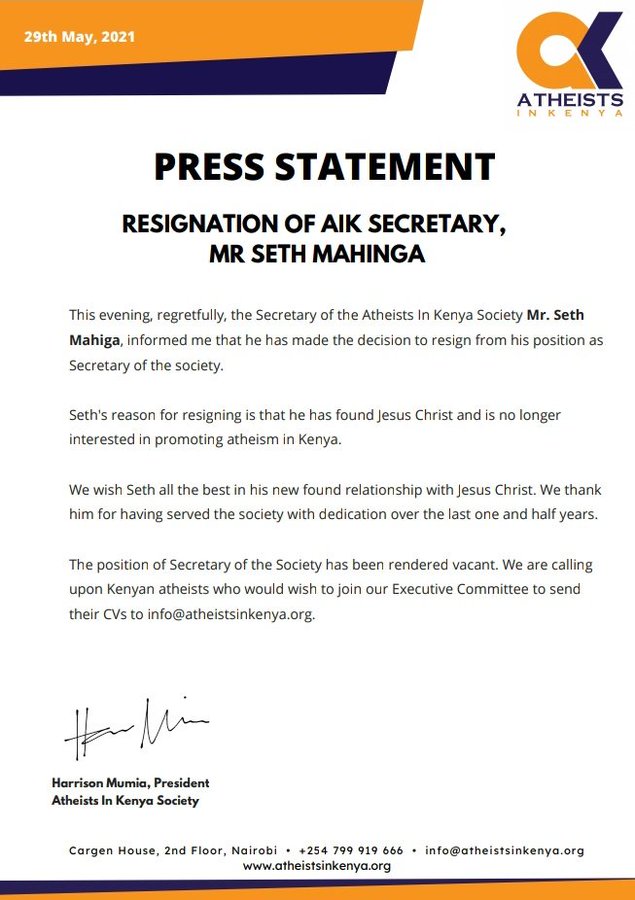 The appended “lol” at the end of the tweet drew the attention of Kenya’s former Chief Justice, Dr. Willy M. Mutunga, who sent out the following message to his one million followers:

Mr. President. If it is of any consolation, besides your LOL, Article 32(1) of our Constitution provides: Every person has the right to freedom of conscience, religion, thought, belief and opinion. This provision is not a laughing matter

The Nairobi-based Atheists in Kenya society “is an atheist organization, registered under the Societies Act in Kenya,” the group’s website states, adding that it the first non-religious society to be registered in the country and a member organization of Humanists International.