Olympic athletes competing in outdoor games have become increasingly vocal in their protests that Tokyo’s summer heat is a threat to their health, prompting tennis to reconfigure its schedule on Wednesday to the evenings to keep players out of the sun.

The decision followed objections from Novak Djokovic, the world’s top tennis player and a favorite to win the gold medal, and a particularly excruciating match for world number two Daniil Medvedev, who protested to the umpire Tuesday that if he continued playing, “I can die.” Djokovic is representing Serbia at the Summer Olympics; Medvedev is playing for the Russian Olympic Committee. 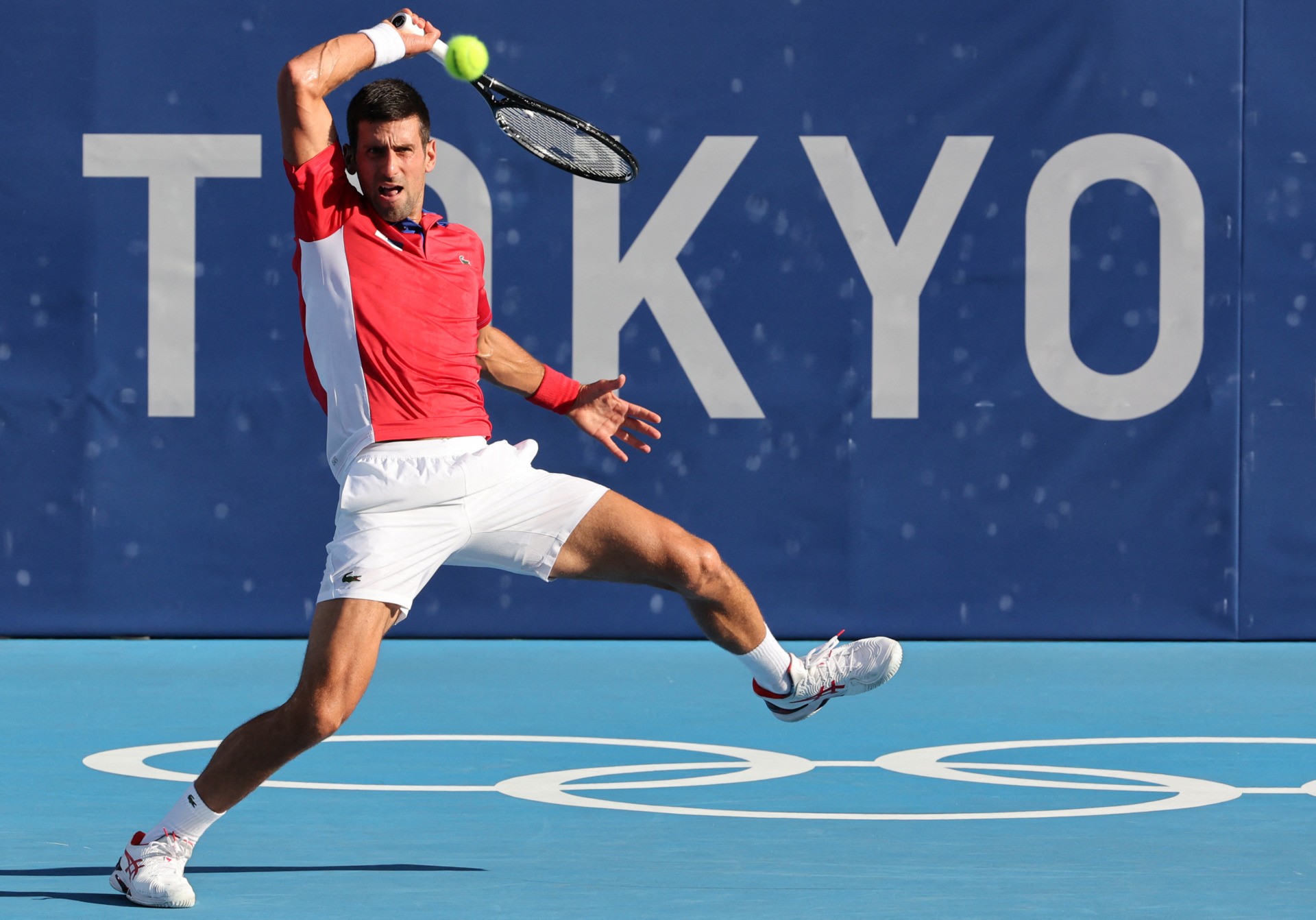 “I felt like my diaphragm has blocked,” Medvedev later explained, according to the Associated Press. “I couldn’t breathe properly. It was the most humid day we had so far — maybe the hottest.”

After taking several breaks, the umpire asked Medvedev if he could continue, to which he replied, “I can finish the match, but I can die.” 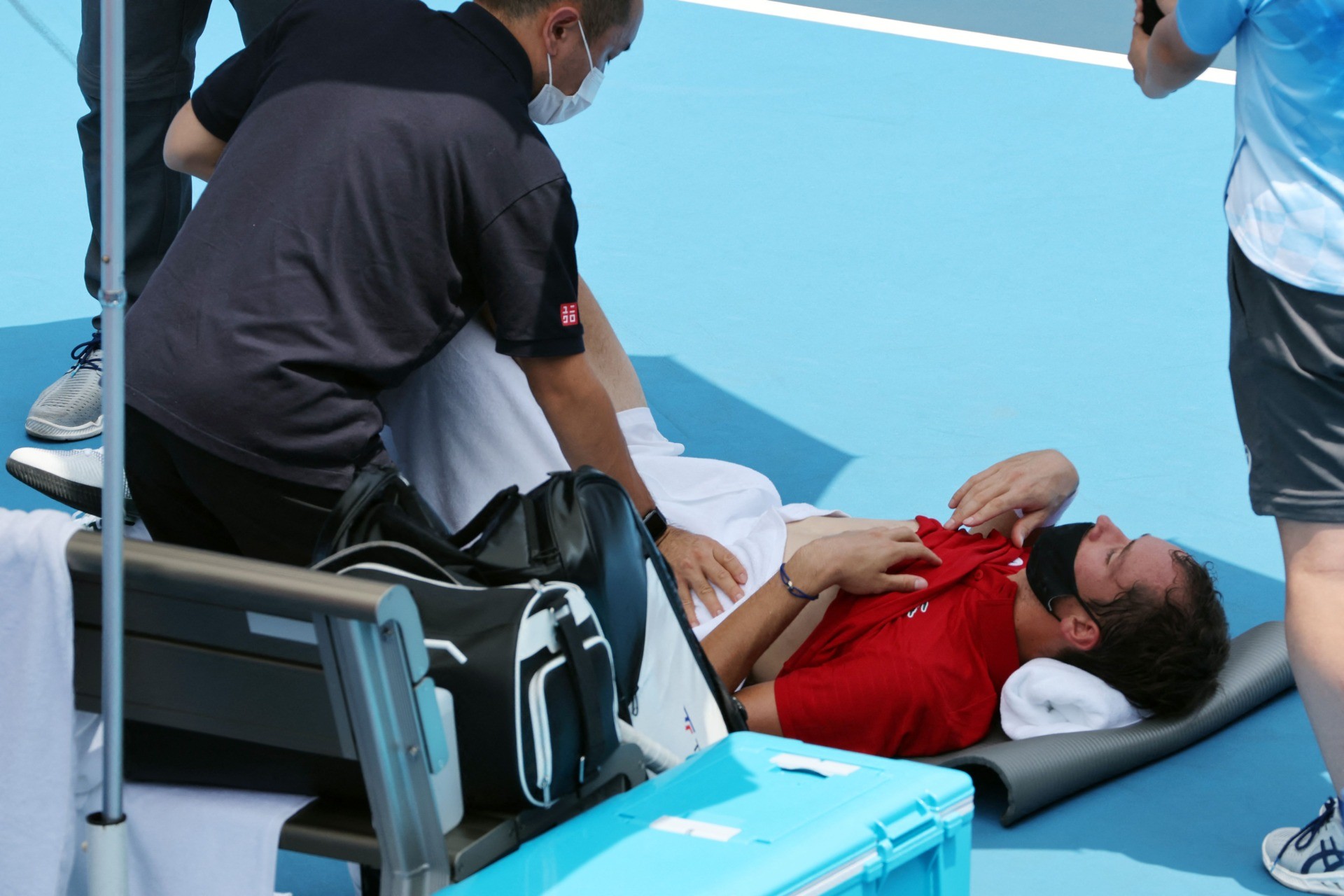 Russia’s Daniil Medvedev is assisted by a physio during Tokyo 2020 Olympic Games men’s singles third round tennis match against Italy’s Fabio Fognini at the Ariake Tennis Park in Tokyo on July 28, 2021. (GIUSEPPE CACACE/AFP via Getty Images)

Medvedev won the match against Fabio Fognini – who complained that Medvedev was taking too many breaks – and shortly thereafter authorities changed the schedule to keep players off the court during peak sunlight hours. By then, however, many players had already endured excruciating matches under extreme heat and humidity, while others – notably, Djokovic – had already been slotted into evening matches, potentially creating a disadvantage.

The Associated Press noted that, on the same day, Spanish tennis player Paula Badosa “left the court in a wheelchair after retiring from her quarterfinal match against Marketa Vondrousova because of heatstroke.” Last week, during a qualifying round, Russian archer Svetlana Gomboeva fainted, also of apparent heatstroke. 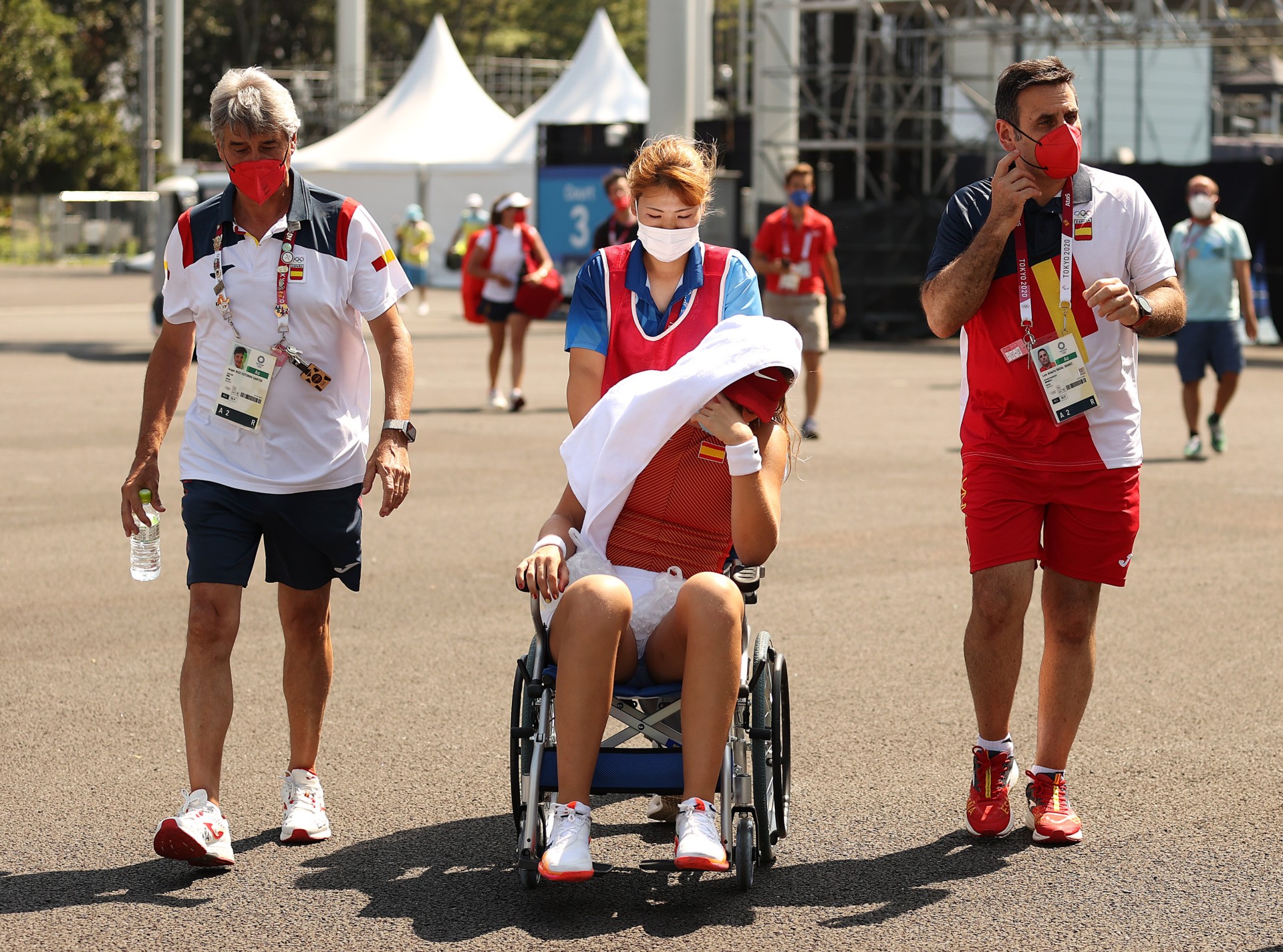 Paula Badosa of Team Spain is helped away from the court in a wheelchair after having to retire from her Women’s Singles Quarterfinal match against Marketa Vondrousova of Team Czech Republic on day five of the Tokyo 2020 Olympic Games at Ariake Tennis Park on July 28, 2021 in Tokyo, Japan. (David Ramos/Getty Images)

In a report this week, NPR noted that experts were warning for years about Tokyo’s notoriously humid summers, in part the product of the dense construction of the city containing heat for long periods of time.

“Tokyo’s Olympic and Paralympic Games are expected to be one of — if not the — hottest and most humid Games on record, with daily temperatures expected in the high 80s and low 90s degrees Fahrenheit,” NPR reported. “With high humidity, that could feel more like 100 degrees — and pose the danger of dehydration, premature fatigue and heat stroke to athletes and Olympic staff.”

Experts suggested the situation could be particularly dangerous for Paralympians.

Yahoo News columnist Robert Whiting accused the Tokyo Olympic Committee this week of having “lied like hell” about the unsuitability of the climate in the Japanese capital in their official bid to host the Games, citing official bid documentation.

“With many days of mild and sunny weather, this period provides an ideal climate for athletes to perform their best,” the pitch read in part. Whiting lamented, “The only conceivable places that are worse would be staging the games in, say, Death Valley, California, or the Horn of Africa.” 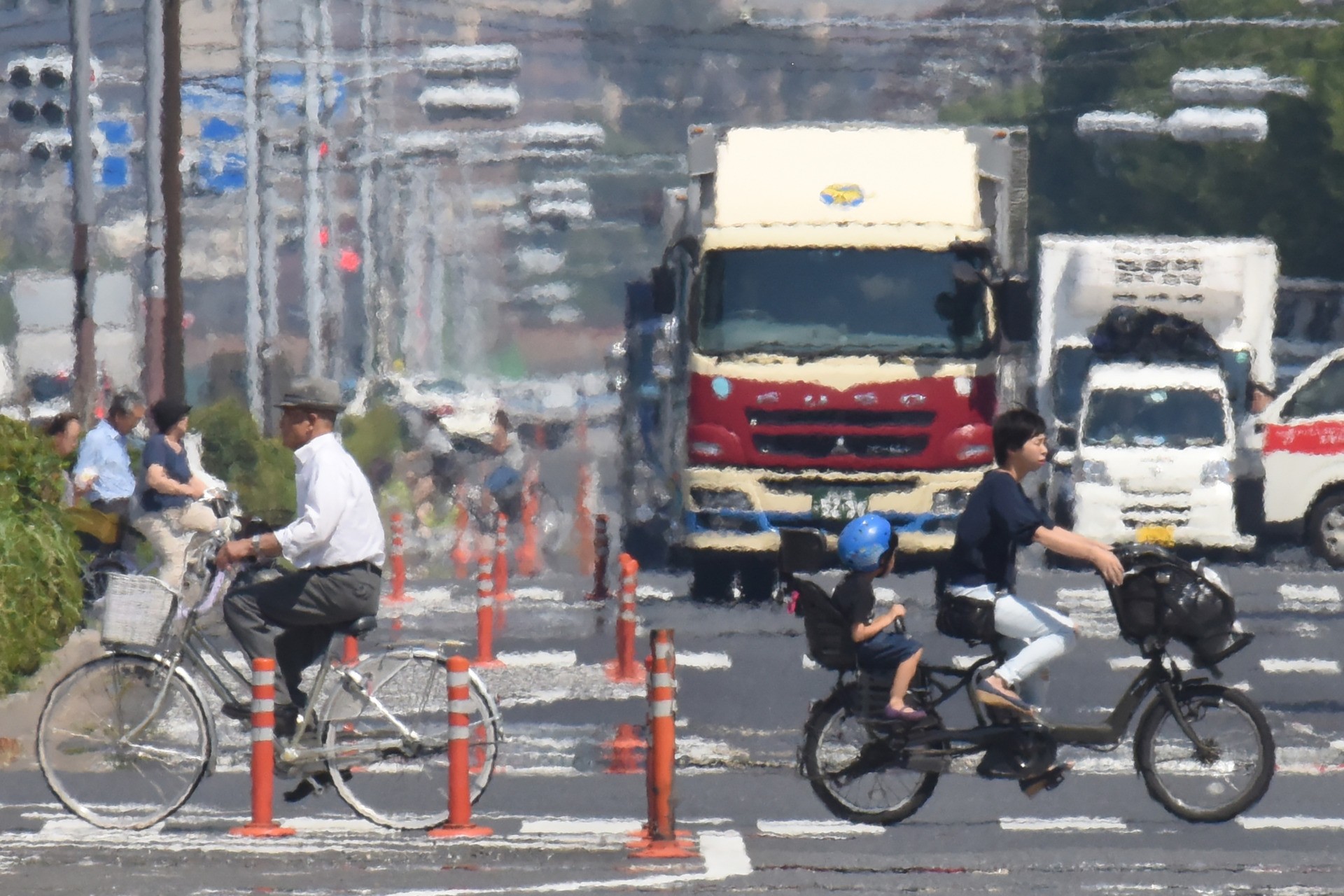 Heat haze distorts the background as bicyclists ride past during a heatwave in Tokyo, Japan (KAZUHIRO NOGI/AFP via Getty Images)

Tokyo’s unsuitability for outdoor sports has raised questions regarding the International Olympic Committee’s (IOC) competence in choosing host cities for the Summer and Winter Games. The IOC had already aroused concerned when it chose Tokyo’s predecessor, Rio de Janeiro, a decade ago, the product of aggressive campaigning by socialist former Brazilian President Luiz Inácio Lula da Silva. That event was marred by extreme pollution in outdoor water sports venues, the Zika virus outbreak of 2016, and high rates of crime resulting in attacks on international athletes.

In 2022, the IOC already has a scandal on its hands as it has chosen Beijing, China, to host the Winter Games. China is home to the world’s largest concentration camps and is currently executing a genocide against the Uyghur people of East Turkestan, a region China claims as its own under the name Xinjiang. Activists worldwide have pressured the IOC to find a new venue for the Games not marred by egregious human rights abuses – including allegations of torture, slavery, executions, forced sterilization of minority women, and live organ harvesting – but neither the IOC, nor many of the Games’ sponsors have reconsidered China. 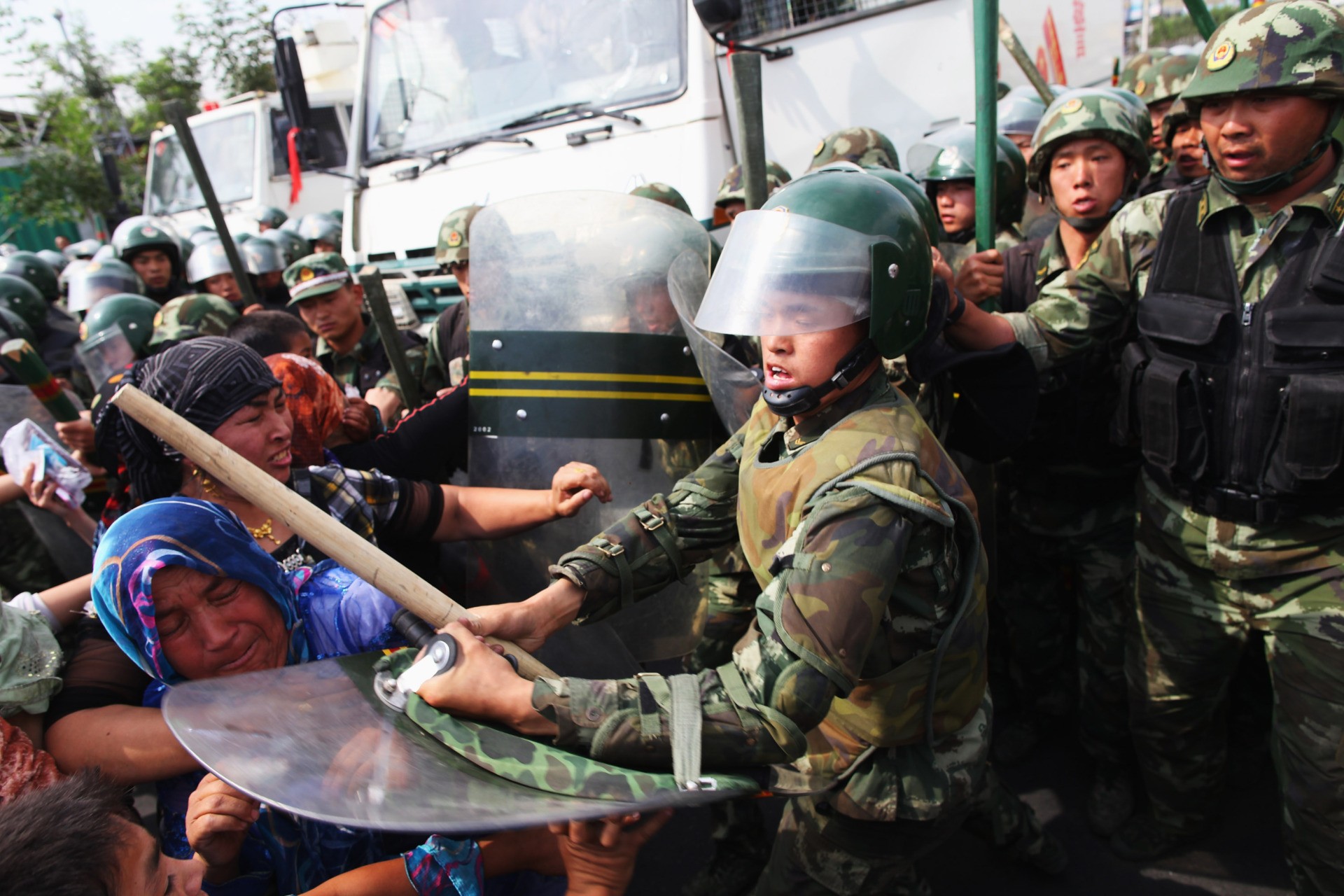 Chinese policemen push Uighur women who are protesting at a street in Urumqi, the capital of Xinjiang Uighur autonomous region, China.(Guang Niu/Getty Images)

The situation also raises concerns for other international sports organizations, particularly the global soccer federation FIFA. FIFA notoriously awarded its 2020 World Cup to the nation of Qatar, where summer heat can rise well over 100ºF in an average June. The heat and unsafe working conditions have killed 6,500 migrant workers between 2011, the year after Qatar won its hosting bid, through 2020, a study published in February found. Doha has fielded years of accusations of trapping migrant workers into slavery by stealing their travel documents and identification when they arrive and cutting the individuals off from their families at home.

FIFA has for years rejected human rights concerns surrounding Qatar. In 2014, FIFA President Sepp Blatter simply replied to complaints by accusing human rights activists of “discrimination and racism.” FIFA did, however, move the tournament out of the summer months and into November and December, when the temperature has only historically hit the upper 70s Fahrenheit. The change has prompted disarray in the global soccer world, as it disrupts decades-old schedules in play for multiple soccer leagues that now have to coordinate to allow their players to perform on the sport’s biggest stage at an odd time of year.