America’s most determined enemies around the world celebrated the victory of the Taliban in Afghanistan this weekend, hailing it as a sign that the United States no longer has the power to interfere with their own ambitions.

China, which has significant investments in Afghanistan, offered its “friendship and cooperation” to the Taliban regime and claimed their victory represented “the choice and will of the Afghan people.”

Chinese state media portrayed the chaotic evacuation of American diplomats from Kabul, and the frantic fumbling of the Biden White House over the past week, as an echo of Vietnam and a sign that American power around the world has collapsed.  The Chinese claimed betrayal of allies has been a hallmark of American foreign policy since the Revolutionary War and advised current U.S. allies, especially Taiwan, to take some grim lessons from the Afghanistan debacle.

China’s state-run Global Times ran a giddy editorial trumpeting America’s demise as a great power, crowing that U.S. defeat in Afghanistan was even worse than Vietnam because “no major power was behind the Afghan Taliban, but the U.S. lost anyway.”

The Global Times said the U.S. would be “naive” to believe its forces can oppose China’s agenda after the “meltdown” in Afghanistan, and said the world has learned an important lesson: “The U.S. may be able to wage a war against small and medium-sized countries, but it cannot win a war anymore.”

Russia likewise welcomed the Taliban as a more “reasonable” and honest alternative to the fallen U.S.-backed civilian government, which the Russians hectored for its endemic corruption. Russia’s Foreign Ministry made a point of thanking the Taliban for providing security for Moscow’s embassy in Kabul.

Russian commentators reportedly described the Taliban takeover as good news because it demonstrates that “Russia’s authority is on the rise” and “America no longer matters.”

Russian Ambassador Dmitry Zhirnov said he hoped Afghanistan would now become “civilized, without any terrorism and drugs,” and said the Taliban has made “promises” to that effect when meeting with Russian officials.

Russia’s special representative to Afghanistan, Zamir Kabulov, sarcastically observed that his government thought the U.S.-trained Afghan military would put up more of a fight. 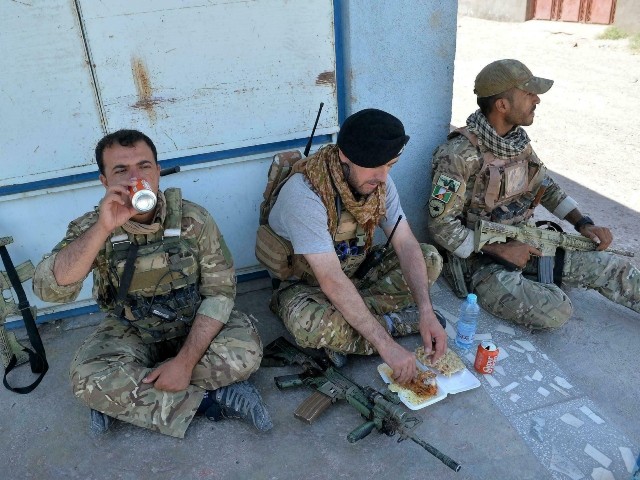 In this picture taken on August 1, 2021, Afghan National Army commando forces rest as they eat their lunch along a road amid ongoing fighting between Taliban and Afghan security forces in the Enjil district of Herat province. (Photo by HOSHANG HASHIMI/AFP via Getty Images)

“It came as a surprise, as we thought that the Afghan army, whatever it is, would still resist for some time,” Kabulov sneered, “It looks like we were too optimistic about the quality of the armed forces trained by the Americans and NATO. They dropped their weapons as soon as the first shot was fired.”

“The Islamic Republic of Iran believes that the reign of the will of the wronged people of Afghanistan has always created security and stability. While consciously monitoring developments in the country, Iran is committed to neighborly relations,” Raisi told outgoing Iranian Foreign Minister Mohammad Javad Zarif in a telephone call.

Raisi reportedly asked Zarif, who served as foreign minister under the previous government, to work for him as a special consultant on Afghanistan. Zarif said Iran “welcomed” the Taliban conquest and bizarrely hoped it would “lead to dialogue and a peaceful transition in Afghanistan.”

Zarif and Raisi shed few tears for deposed Afghan President Ashraf Ghani, one of the most senior officials to attend Raisi’s inauguration in Tehran.

Some Iranian media outlets quickly began referring to the Taliban government by its preferred name, the “Islamic Emirate.” The Iranian government signaled on Monday it is prepared to receive an expected influx of refugees from Afghanistan. 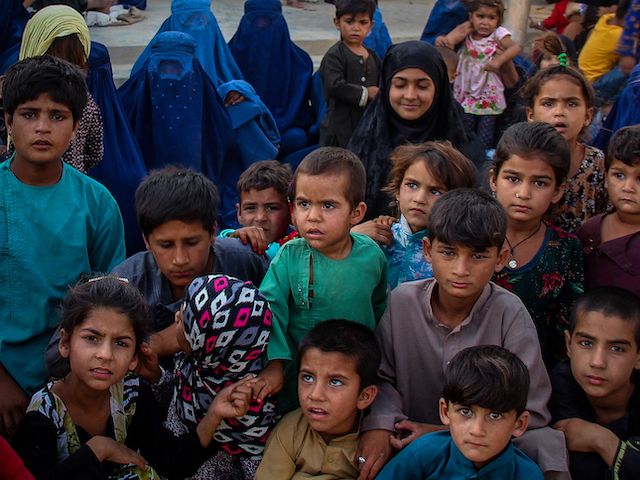 Children from internally displaced Afghan families arrive from the districts of Khan Abad, Ali Abad, and Imam Sahib, after fleeing due to the ongoing battles between Taliban and Afghan security forces in Kunduz city on June 26, 2021. (Photo by STR/AFP via Getty Images)

Palestinian terrorist organization Hamas on Monday saluted the Taliban for “a victory that came as the culmination of more than 20 years of struggle.” Hamas congratulated “the Afghani Muslim nation” for achieving “the downfall of the American occupation in all Afghani territory.”

“The Taliban are victorious today after being accused of backwardness and terrorism. They emerge today as a smarter and more realistic movement. They confronted America and its agents, and refused to compromise with them,” senior Hamas official Moussa Abu Marzouk said on Monday, comparing the situation to his organization’s battles with Israel. “They were not deceived by bright headlines about ‘democracy’ and ‘elections.’”

“This is a lesson for all oppressed peoples. Will they learn the moral of this story?” he said.

Another Palestinian terrorist gang, Islamic Jihad, praised the “liberation” of Afghanistan from “Western and American occupation.”

“It has been the Muslim people which has performed the greatest jihadist heroics against all invaders over the course of their honorable history,” Islamic Jihad said.

The Palestine Liberation Organization (PLO), however, muttered that the Taliban remains “the dark and brutal force that produced the Islamic State and al-Qaeda,” and warned, “Arabic and Islamic peoples” usually end up “paying the price” for such extremism.

Pakistan’s Prime Minister Imran Khan applauded the Taliban for breaking the “chains of cultural enslavement” to the West on Monday, at a ceremony where he introduced a new Islamist curriculum for Pakistani schools.

“You take over the other culture and become psychologically subservient. When that happens, please remember, it is worse than actual slavery,” Khan said, touting his new Islamist education program as a similar act of liberation against Western culture.

Pakistan’s Jamiat Ulema-e-Islam (JUI-F), an extreme Islamist party, sent a message of congratulations to the Taliban for their “great achievement” on Monday.

“With the help and support of Allah Almighty, after sincere sacrifices, Taliban Mujahideen have liberated their homeland Afghanistan from the world powers and their henchmen,” said party leader Maulana Fazi ur Rehman.

“The Jamiat Ulema-e-Islam values the new system that the Taliban leadership has launched with a policy of peace, goodwill, and reconciliation after its victories,” he said. “We hope that with the same sincerity, divinity, and foresight, they will succeed in building a peaceful and stable Islamic Afghanistan through a better strategy.”

Ahmad bin Hamad al-Khalili, the grand mufti of Oman, issued a statement on Monday declaring the Taliban conquest a victory for all Muslims.

“We congratulate the brotherly Muslim people of Afghanistan for the clear victory and the grand conquering of the aggressor invaders, and we also congratulate ourselves and the entire Islamic nation for the fulfillment of God’s sincere promise,” he said.

Reports indicated that Ghani had personally traveled to Oman following his flight from his home country, though no confirmation has surfaced. Ghani’s whereabouts remain unknown at press time.