The governments of at least 12 countries worldwide have vowed to impose various restrictions on Christmas or New Year’s festivities in an effort to curb Chinese coronavirus transmission over the winter holiday season.

The mandates include limits on the number of people allowed to gather in public or private, bans on dancing and alcohol sales, and vaccination or testing requirements for public and private get-togethers or domestic travel. Some countries have canceled public celebrations of either Christmas or New Year’s (or both). Read on to learn which governments have ordered a crackdown on merriment and togetherness this yuletide. 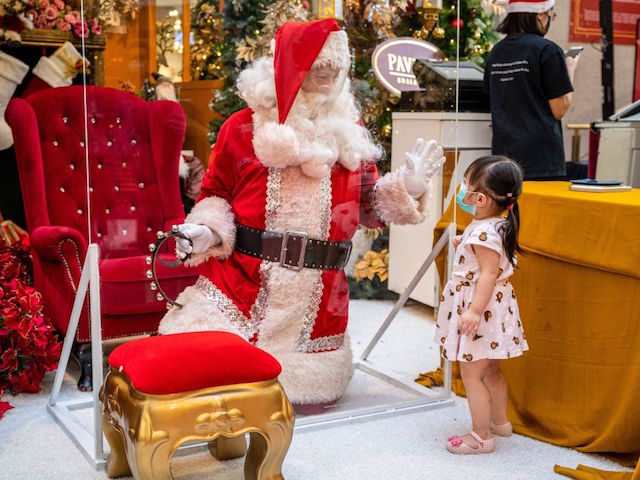 A man dressed in a Santa Claus outfit, wearing a face shield and kneeling behind a transparent barrier amid concerns over the spread of Chinese coronavirus, gestures to a girl at a shopping mall with Christmas decorations in Kuala Lumpur on December 22, 2020. (MOHD RASFAN/AFP via Getty Images)

The Czech Republic’s government declared a 30-day state of emergency on November 26 over the Chinese coronavirus. The edict banned the operation of all Christmas markets across the country and prohibited people from drinking alcohol in public places. Bars, restaurants, discotheques, nightclubs, and casinos nationwide must close by 10:00 p.m. under the state of emergency order. 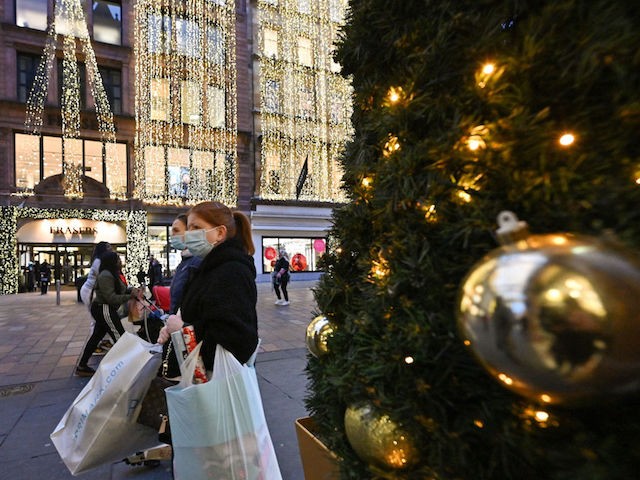 Members of the public are seen Christmas shopping as Chinese coronavirus rules are tightened on December 21, 2021 in Glasgow, Scotland. (Jeff J Mitchell/Getty Images)

Scotland’s government has banned all large-scale New Year celebrations in the country on December 31, 2021.

Scotland First Minister Nicola Ferguson Sturgeon announced a series of social gathering restrictions for all of Scotland on December 21 that will take effect starting on December 27. Sturgeon said her administration’s “official advice for Christmas Day remains unchanged, with people allowed to meet with family but urged to be cautious,” the U.K.’s Daily Mail reported.

“But from December 26 for three weeks there will be attendance limits placed on live public events which will torpedo Hogmanay [Scottish New Year] festivities,” the newspaper reported.

The government of Canada’s Ontario province reintroduced social gathering limits for an indefinite amount of time starting on December 19. The edict included a ban on dancing and singing in the province — except for “workers or performers” — and a prohibition on the sale of alcohol after 10:00 p.m. Ontario Premier Doug Ford reduced the number of people allowed to gather socially both indoors (from 25 to 10) and outdoors (from 100 to 25).

“Omicron will not take a holiday,” Ontario Chief Medical Officer of Health Kieran Moore told reporters on December 17 when announcing the new restrictions. He referred to the latest known variant of the Chinese coronavirus, which has swept across the globe since it was first detected in southern Africa in mid-November. 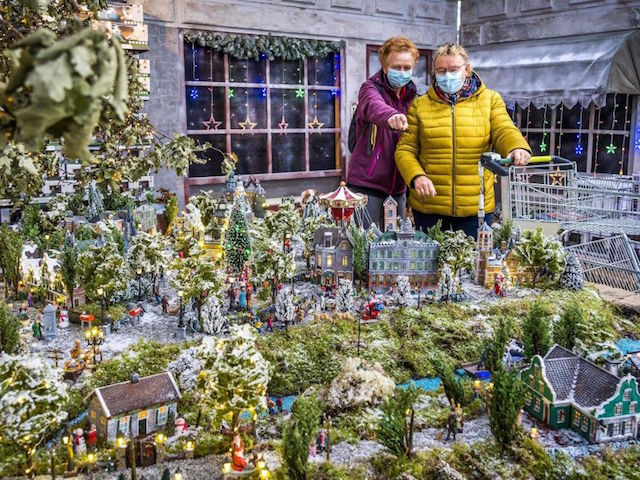 Customers discovers the Christmas decorations at a garden center in Zoetermeer, on October 16, 2020. (LEX VAN LIESHOUT/ANP/AFP via Getty Images)

The government of the Netherlands on December 14 announced it would extend a nationwide coronavirus lockdown — in place since November 28 — through January 14.

“That is of course not the good news you hope for at Christmas time,” Netherlands Caretaker Prime Minister Mark Rutte told the Dutch public during a nationally televised news conference.

“So yes, a disappointing but perhaps not very big surprise,” he added, referring to the lockdown extension.

Holland’s November 28 partial lockdown restricted social gatherings to 13 people and imposed a 5:00 p.m. curfew on all bars, restaurants, cinemas, and sports venues. Essential shops such as grocery stores were ordered to close by 8:00 p.m.

Rutte shocked Nederlanders on the evening of December 18 when he announced a separate, snap lockdown for the entire country that would further tighten gathering restrictions from December 19 until at least January 14. The last-minute lockdown order “left people’s Christmas plans in disarray,” Reuters reported on December 19 after observing Dutch urban centers left “largely deserted.”

The mandate bans groups greater than two people from gathering outdoors. All businesses deemed non-essential by the Dutch federal government — including restaurants, museums, hair salons, and gyms — must close.

Portugal’s government will limit citizens’ movement from December 25 until at least January 9.

“People will need to test negative for the [corona]virus to access cinemas, theatres, sports events, weddings and baptisms,” Euro News reported. “On Christmas and New Year’s, people will need a negative test result to access restaurants and public celebrations.”

“On New Year’s Eve, no more than 10 people can gather in the street, and drinking alcohol outdoors will be prohibited,” according to the news site. 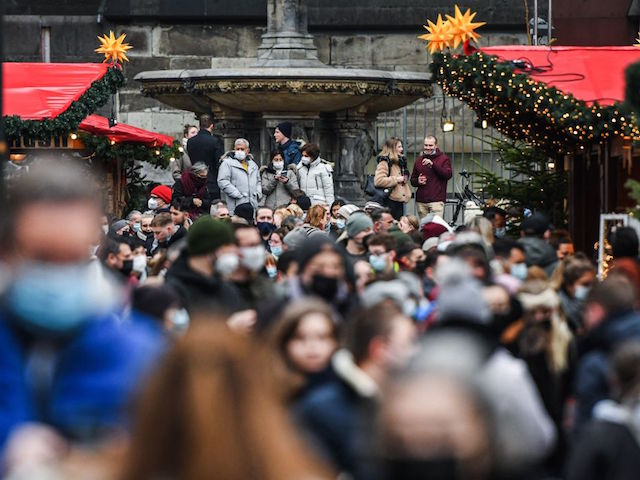 People are seen wearing face masks as they walk at a Christmas market in the city of Cologne, western Germany, on December 18, 2021. (INA FASSBENDER/AFP via Getty Images)

Germany’s government will limit private gatherings to “a maximum of 10 people who have been vaccinated or recovered from COVID-19 [Chinese coronavirus]” starting December 28.

“In cases when an unvaccinated person is present, only one other household would be able to attend. The new capacity limits will apply to both indoor and outdoor celebrations,” Euro News reported.

The restrictions include a ban on spectators at “sporting events, cultural shows, concerts and other large public events.”

“Fireworks will also be banned for New Year’s Eve celebrations, and night clubs will also be required to close across the country,” according to the news site.

Paris announced on December 18 the cancelation of a planned fireworks display and series of concerts slated to take place on the famous avenue Champs-Elysées on New Year’s Eve.

Norway has limited gatherings at private homes to ten people under a coronavirus measure lasting from December 9 to January 6, though the country’s government said it will increase this number to 20 on Christmas and New Year’s Eve.

Latvia’s government declared a three-month coronavirus state of emergency on October 11 that will last through January 11.

“Only vaccinated people or people recovered from COVID-19 [Chinese coronavirus] are allowed to take part in public events,” the notice reads.

People unvaccinated against the Chinese coronavirus must attend religious ceremonies “individually … if at least 15 m2 [square meters] of publicly available space is ensured per person and face masks are worn,” the Latvian government stipulates.

Unvaccinated persons may visit houses of worship for no more than 15 minutes at a time and they are barred from attending church services along with vaccinated parishioners or people who can prove they recently recovered from the Chinese coronavirus.

The number of participants in “cultural events” in Latvia during the state of emergency is limited to 60 percent of a venue’s capacity.

“The maximum number of visitors permitted at a cultural event is 500,” according to the Latvian Foreign Ministry. 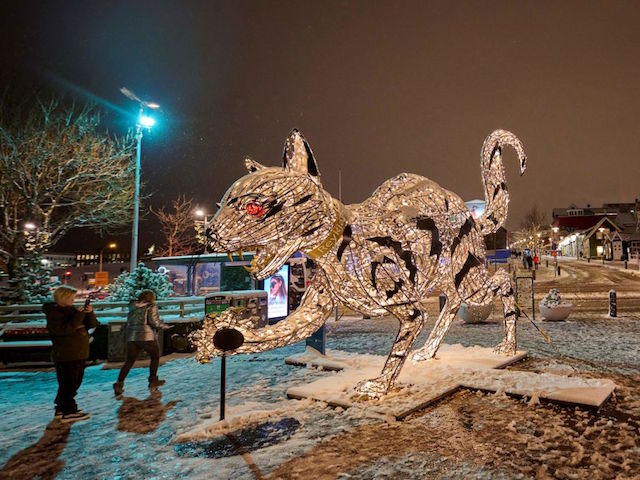 People take photos of an illuminated cat sculpture in a snow-covered park in downtown Reykjavik on November 29, 2021. The new Christmas beer made from green peas and marinated red cabbage is a hit in Iceland this festive season. Made by a small Reykjavik brewery, the recipe for ‘Ora jolabjor’, or Ora Christmas Beer, is inspired by Iceland’s traditional Christmas dinner, where peas and red cabbage are typically served alongside smoked leg of lamb and caramelised potatoes. (HALLDOR KOLBEINS/AFP via Getty Images)

Iceland’s federal government imposed various social distancing requirements, capacity limits, and operating hour restrictions on businesses and services nationwide as of December 17. Garda World predicted at the time the limitations on Icelandic businesses would remain in place “for the next two weeks.”

“Private gatherings are limited to 50 people,” according to the security firm. “Public events can host up to 500 people, providing attendees can provide evidence of a negative PCR test result from the previous 48 hours or proof of recovery from COVID-19 [Chinese coronavirus] in the previous 180 days.”

“Facemasks are mandatory in enclosed public spaces and wherever social distancing of 1 meter (3 feet) cannot be maintained,” Garda World noted.

“Indonesia is currently implementing a more restrictive form of lockdown wherein non-essential and non-critical commercial activities are not allowed,” according to a December 13 coronavirus notice issued by the German-Indonesian Chamber of Commerce and Industry (EKONID).

On the Indonesian islands of Java and Bali, restaurants and shopping malls are expected to reduce their open hours and operate at limited capacity during the winter holiday season.

“Authorities have extended public activity restrictions (PPKM) in Java and Bali through at least January 3,” GardaWorld reported on December 15.

“PPKM remain in effect for other parts of the country through at least December 23, but further extensions are likely,” the Canadian private security firm predicted.

Indonesia’s federal government will ban people aged 17 years old and up from traveling domestically between December 24 and January 2 if they are not vaccinated against the Chinese coronavirus, according to Garda World. Indonesia’s Transport Ministry currently requires all people in the country to present proof of Chinese coronavirus vaccination to travel between the archipelago’s various regions and islands. Indonesians traveling long-distance within the country must provide both proof of Chinese coronavirus vaccination and a negative test result to transport authorities.