The Ukrainian Ministry of Defense (MoD) said a thousand Russian soldiers have been killed in action.

One report claimed about 20 Russian tanks were destroyed in the Chernihiv region of northern Ukraine, along with a column of 10 to 15 other “units of equipment.”

“Chernihiv holds the line and destroys the enemy! Believe in the Armed Forces and support them!” said a statement from the Ukrainian military’s Operational Command North.

If accurate, the report could be strategically significant because the Ukrainians believe Russia is trying to position armor in Chernihiv and Ivankiv, a city on the Teteriv River, to make a combined push against the capital of Kyiv.

In further news along those lines, Ukrinform and MoD sources reported key bridges across the Teteriv and other key routes of Russian advance were destroyed. 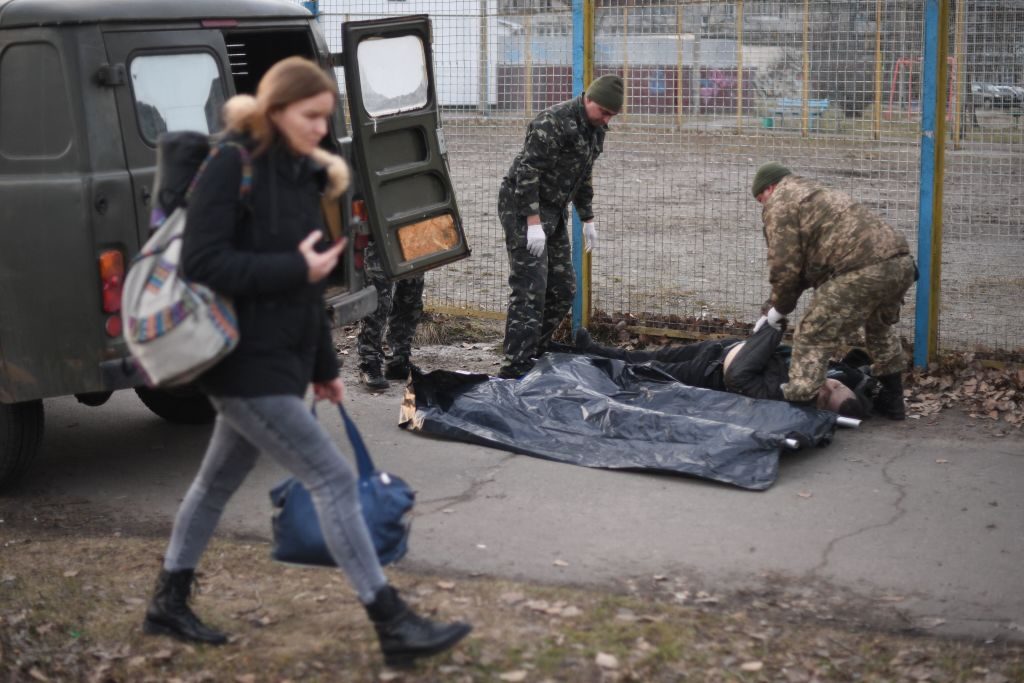 A woman walks as Ukrainian servicemen prepare to pick up the body of an Ukrainian man who was shot when a Russian armoured vehicle drove past him, on a sidewalk in the north of Kyiv on February 25, 2022. (DANIEL LEAL/AFP via Getty Images)

In southern Ukraine, a heroic engineer named Vitaliy Skakun allegedly gave his life to single-handedly destroy a bridge in the port city of Henichesk, halting a column of Russian tanks.

“On this difficult day for our country, when the Ukrainian people are repelling the Russian occupiers in all directions, one of the most difficult places on the map of Ukraine was the Isthmus of Perekop, where a separate marines battalion was one of the first to meet the enemy,” said a statement from the Ukrainian General Staff.

The statement said Skakun volunteered to take out the bridge and successfully planted explosives, but did not have time to escape. After contacting his unit to say he was blowing up the bridge, “an explosion was heard immediately.”

“Our comrade died. His heroic deed significantly slowed the enemy’s advance, which allowed the unit to redeploy and organize the defense,” the General Staff said.

Ukrainian forces fighting near Kharkiv claimed they were able to destroy an unspecified number of the Russian Grad rocket launch systems that have been hammering the city. Ukrainian ground forces posted video of destroyed Grad launchers parked in the middle of a street, surrounded by debris.

#Ukraine 🇺 is not rolling over.

These Russian GRAD launchers habe been torn to pieces in the #Kharkiv region. pic.twitter.com/aQcbyJwIXy

Ukrainian officials accused the Russians of committing war crimes by showering civilian areas of Kharkiv with indiscriminate rocket fire on Thursday, killing at least one child. An unexploded rocket landed in an intersection in Kharkiv on Friday, near the National Guard academy.

A large rocket landed in the middle of the street near the National Guard academy in Kharkiv, Ukraine’s second-largest city. It was unclear if anyone was injured by the rocket, which failed to detonate.

National Police officials in the Cherkasy region reported a Russian warplane was shot down on Friday. The pilot was able to eject and is now hunted by the police.

“Today, on February 25, at about 08:30, near the village of Voznesenske, the Zolotonosha district, our military shot down an enemy plane. The pilot managed to eject during the fall. We call on locals to pay special attention to suspicious people, especially in tactical or military uniform with red elements on clothing, possibly with visible injuries. The man may stay within the Zolotonosha district and try to stop passing vehicles in order to get to another city,” read a statement from the police.

Social media users are circulating a video that purportedly shows the Russian plane exploding over Voznesenske, but in fact is a mislabeled clip from 2011 that depicts a fighter getting shot down by rebels near Benghazi, Libya.

The Ukrainian MoD said on Thursday that “six Russian air force planes and two helicopters have been shot down” in total.  On Friday morning, the MoD claimed “the number of losses from the occupying forces of the Russian Federation is more than one thousand.”

“Russia has not suffered such a large number of casualties during this period of hostilities in the entire period of its existence in any of the armed conflicts it has started,” the MoD statement said. 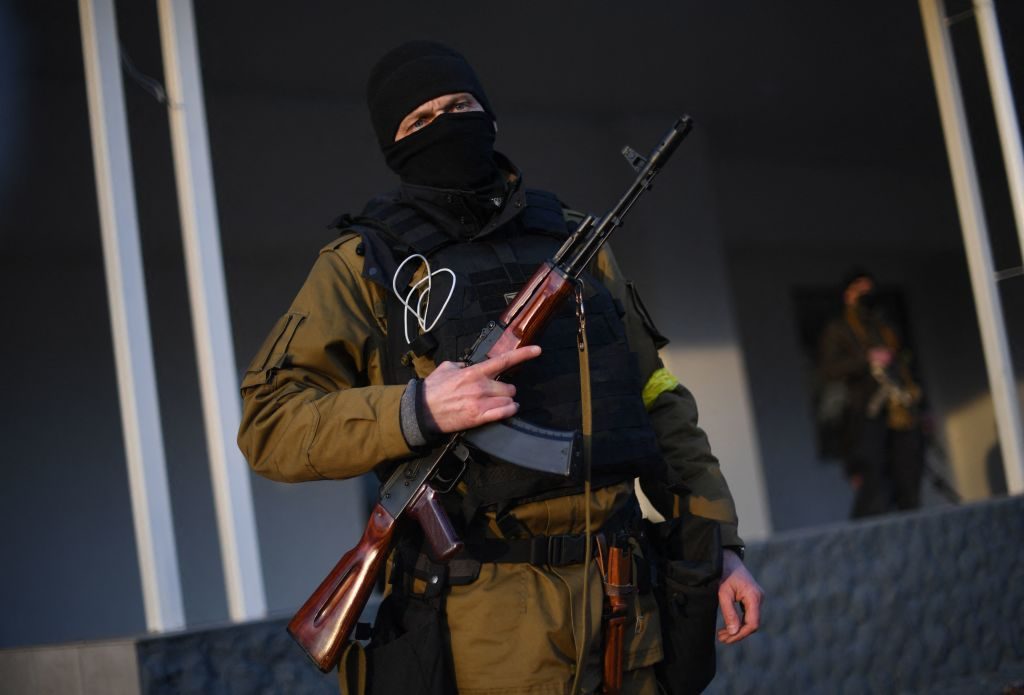 Armed civilian volunteers stand alert on a street in Kyiv on February 25, 2022. Russian forces reached the outskirts of Kyiv on February 25, as Ukrainian President said the invading troops were targeting civilians and explosions could be heard in the besieged capital. (DANIEL LEAL/AFP via Getty Images) 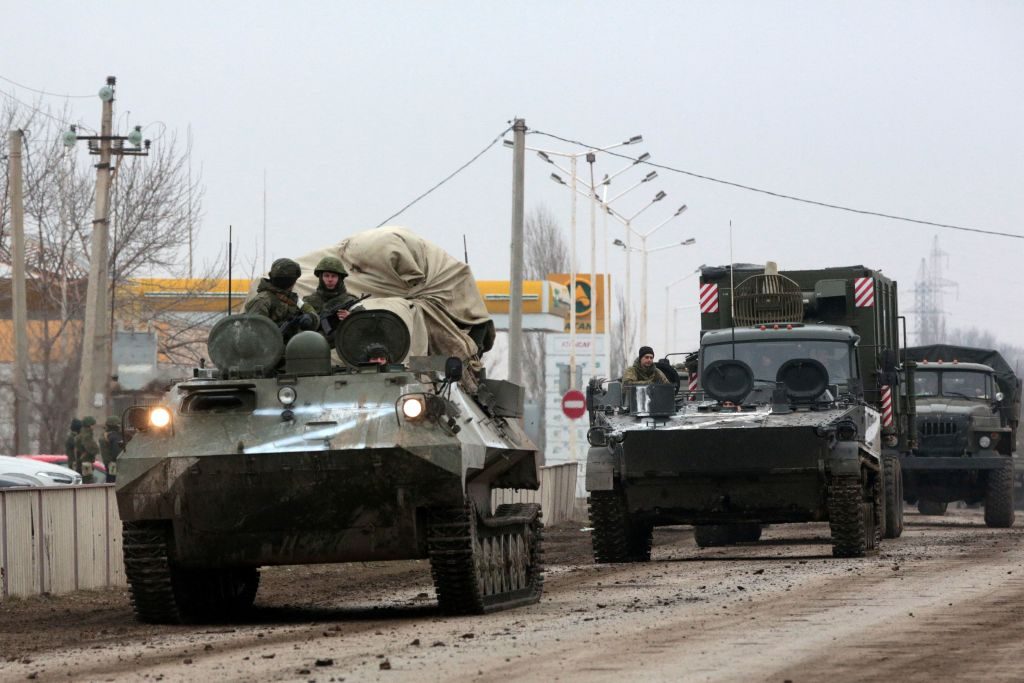 For its part, the Russian military said on Friday it has captured the airport outside Kyiv, which could be used to fly Russian reinforcements directly to the Ukrainian capital. The Russian Defense Ministry claimed over 200 Ukrainian troops have been killed so far during the invasion, a death toll not far from Ukrainian President Volodymyr Zelensky’s figure of 137 killed and 316 wounded, which he provided on Thursday night.

Konashenkov further claimed Russia-backed separatist fighters captured territory in eastern Ukraine with support from Russian artillery. The Russian Defense Ministry claimed it has destroyed 118 Ukrainian military installations, including airfields and missile batteries, destroyed about a dozen Ukrainian warplanes, and captured at least 150 Ukrainian troops. The latter claim was disputed by the Ukrainian government, which insisted none of its forces have surrendered.