Philippines President Rodrigo Duterte reminisced on Tuesday about days in his youth when the country endured gasoline rationing, suggested he may impose such a policy due to skyrocketing prices and low demand he blamed on the “stupid war” between Russia and Ukraine.

Duterte also blamed the Russia-Ukraine war for “inflation everywhere” and urged the two countries to end the conflict while insisting the Philippines should remain neutral.

Zelensky has refused Moscow’s demands to end the attack – including the full removal of all weapons from Ukrainian territory – and denied accusations of being a “neo-Nazi,” observing that his family fought the Nazis in World War II and that he is Jewish and lost family in the Holocaust.

The Philippines is a close ally of the United States, sharing a military treaty responsibility with Washington. America has backed Ukraine in the war through weapons supplies, but Manila has not followed. Duterte referred to Putin as a “personal friend” on Tuesday and expressed concern for Putin himself amid the war. 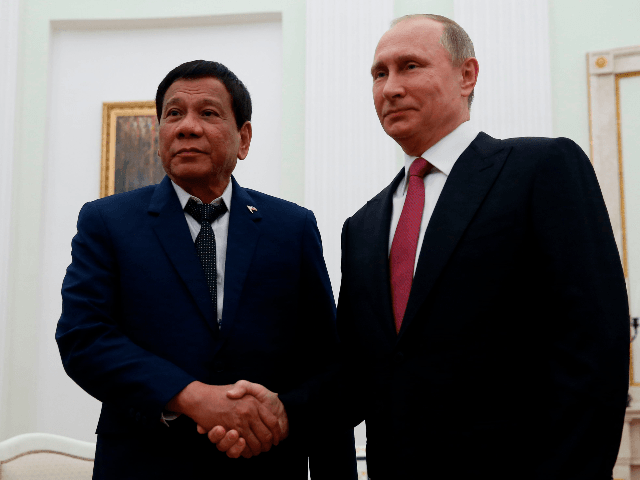 “There is inflation everywhere because there is a conflict. And you spend more than what you can really afford would spell (a higher) inflation for everybody,” Duterte said in a pre-recorded televised speech, according to the Philippine Star. “We have to watch the global market factors and I hope that this war, I said I called it a ‘stupid war,’ they should stop it.”

“They (Ukraine and Russia) are fighting, it has affected everything, the supply of oil, it would be difficult if the demand is high and the supply (is limited),” Duterte claimed. “For those oil-producing countries, if they do not increase the output of their oil, there (would) be a crisis again … because they imposed sanctions on Russia.”

Much of the West, including America, has imposed sanctions on the Russian oil industry.

Duterte went on to recommend more citizens use public transportation to reduce gasoline consumption and warned that he might resort to rationing fuel.

“So there was a time when all people were given coupons to buy gasoline, and it was limited … We might reach that situation. I hope it will not reduce the oil (supply) because there is war,” Duterte said.

In other remarks this week, Duterte lamented the personal toll Putin’s invasion of Ukraine may be taking on the Russian strongman.

“With regard to Russia, I’m hurting, Putin is my friend. He’s a personal friend,” Duterte said during an event to inaugurate a new government facility that did not have any overt relationship to the Ukraine war. Putin reportedly added that he was “pained” by what Putin is going through. He also insisted the Philippines should not take sides because both the American and Russian militaries keep a presence close to the Philippines, suggesting they may attack.

“Let us not intervene for now because Russia and America have several assets in the sea. They are just there. There are about more than 800 submarines roaming around, including (in) our country,” Duterte asserted.

The Philippine Department of Energy documents that the majority of its imported crude oil comes from the Middle East. Most of its imported refined petroleum comes from China, South Korea, and Taiwan. Duterte did not elaborate on his remarks regarding how Ukraine is affecting the country’s oil supply and does not note that neither Russia nor Ukraine appears at the top of the lists of gasoline importers to the Philippines. The absence of a major supplier on the global market, however, would force importing countries to compete to purchase fewer resources, driving prices up for all suppliers.

On Monday, Philippine Energy Undersecretary Gerardo Erquiza similarly equated the war to rising gas prices in the country during a public briefing but added worsening coronavirus spread in China and an earthquake in Japan to factors contributing to the situation.

“The pandemic worsened in China which resulted in new lockdowns. So economic activity weakened in China. There was an earthquake in Japan, the 2 refineries there are now running,” Erquiza explained in Filipino, according to a translation by ABS-CBN. “Things were OK last week, but now we were told nothing much has happened, so we do not know how this will affect oil prices this coming week.”

The Philippines has experienced surging gasoline prices all month, hitting a year-long national high on March 8. Energy Secretary Alfonso Cusi said at the time that global oil prices, which are directly affected by the availability of Russian oil, could surge as high as $200 a barrel, affecting prices at home.

“We are not saying that will happen immediately. If everybody is getting from the same source, the price will really increase. We, on the other hand, are looking at how far we can (cope), but we don’t know how long,” Cusi warned.

The Duterte administration approved a monthly subsidy of 200 pesos ($3.82) for poor households last week to offset the increase in gasoline prices. Fuel companies also independently implemented a discount in fuel prices for the first time this week, partially in response to concerns of economic devastation.