Cai Qi, the Chinese Communist Party secretary of Beijing, told state media Monday that the city would adhere to its “zero-Covid” policy of lockdowns and quarantines for the next five years.

State media rapidly deleted his comment — and Chinese censors relentlessly scrubbed it from websites — after a burst of shock and outrage on social media.

The original quote from Cai, as published by the state-run Beijing Daily, read as follows: “In the next five years, Beijing will unremittingly grasp the normalization of epidemic prevention and control.”

The rest of the article made it clear that Cai was talking about the harsh lockdowns of residential compounds, districts, and entire cities that have plagued China this year, most notoriously in Shanghai. 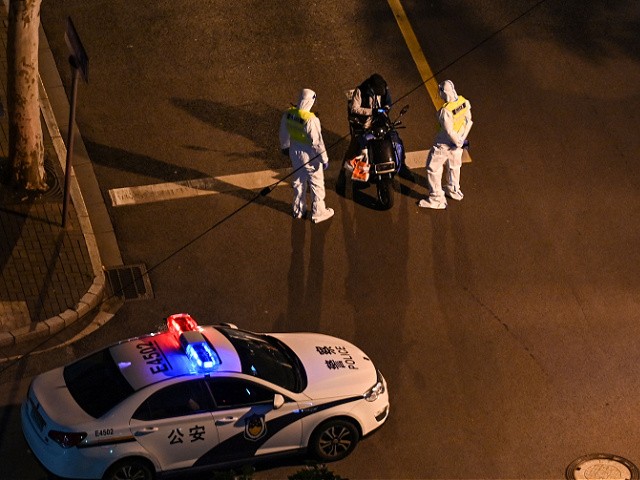 Policemen wearing personal protective equipment (PPE) check a person on a scooter on the street during a Covid-19 coronavirus lockdown in the Jing’an district in Shanghai on April 24, 2022. (Photo by HECTOR RETAMAL/AFP via Getty Images)

Cai might have thought he was just dumping a little pandemic boilerplate language into a chat with a Communist Party media organ, but Chinese social media went wild after his comments were published. In a matter of hours, the interview had been shared far and wide, and a hashtag for the “five years” comment racked up a million hits on Weibo, China’s version of banned Twitter.

“Countdown to escape China,” one Weibo user quipped. Others complained that the authorities did not understand the importance of returning to “normal life” as soon as possible, as much of the rest of the world has done.

“For the next five years … what is the point of being alive even?” a glum Weibo user asked.

The Beijing Daily article was swiftly edited to remove the “five years” line, while censors erased Weibo posts and hashtags that referenced it.

“Authorities have not clarified the statement or the removal of the reference to five years. Some observers suggested the ‘five years’ phrase was a term used often in government announcements, but which appeared to be a timeline in this context, or that it was erroneously added in by the original publisher of the notice,” the UK Guardian suggested Monday.

Another possibility is that Chinese officials were irked that Cai’s interview was stealing attention away from much-touted reopenings in Beijing, such as the resumption of in-person schooling, after the last round of coronavirus lockdowns.

Fear of more lockdowns haunts every city in China, and as the Guardian pointed out, some of them are still enforcing district quarantines today.

City and national officials are completely unapologetic about their “zero-Covid” policies — even Shanghai boss Li Qiang insisted on Saturday that his city’s hellish two-month shutdown was “completely corred” — so there is every reason for Chinese subjects to believe they might be living under constant testing, electronic monitoring, restrictions, and complete lockdowns for five years to come.