SHANGHAI (AP) — Protesters pushed to the brink by China’s strict COVID measures in Shanghai called for the removal of the country’s all-powerful leader and clashed with police Sunday as crowds took to the streets in several cities in an astounding challenge to the government.

Police forcibly cleared the demonstrators in China’s financial capital who called for Xi Jinping’s resignation and the end of the Chinese Communist Party’s rule — but hours later people rallied again in the same spot, and social media reports indicated protests also spread to at least seven other cities, including the capital of Beijing, and dozens of university campuses.

Largescale protests are exceedingly rare in China, where public expressions of dissent are routinely stifled — but a direct rebuke of Xi, the country’s most powerful leader in decades, is extraordinary.

Three years after the virus first emerged, China is the only major country still trying to stop transmission of COVID-19 — a “zero COVID” policy that regularly sees millions of people confined to their homes for weeks at a time and requires near-constant testing. The measures were originally widely accepted for minimizing deaths while other countries suffered devastating wavs of infections, but that consensus has begun to fray in recent weeks.

Then on Friday, 10 people died in a fire in an apartment building, and many believe their rescue was delayed because of excessive lockdown measures. That sparked a weekend of protests, as the Chinese public’s ability to tolerate the harsh measures has apparently reached breaking point. 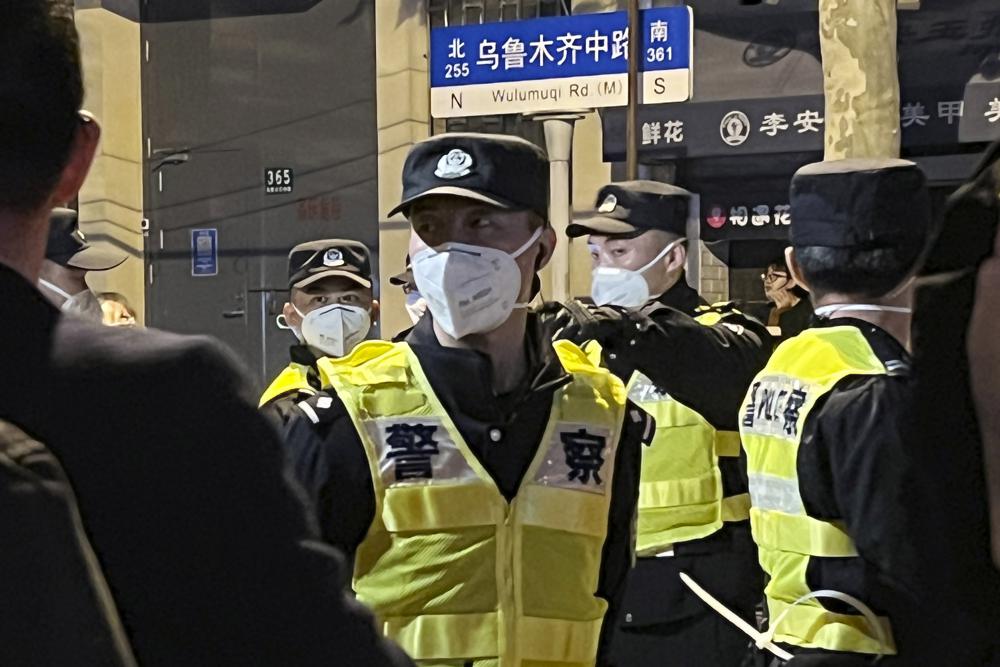 Chinese police officers block off access to a site where protesters had gathered in Shanghai on Sunday, Nov. 27, 2022.  (AP Photo)

Hundreds of demonstrators gathered late Saturday in Shanghai, which experienced a devastating lockdown in the spring in which people struggled to secure groceries and medicines and were forcefully taken into centralized quarantine.

On a street named for the city in China’s far west where the fire happened, one group of protesters brought candles, flowers and signs honoring those who died in the blaze. Another, according to a protester who insisted on anonymity, was more active, shouting slogans and singing the national anthem.

In a video of the protest seen by The Associated Press, chants sounded loud and clear: “Xi Jinping! Step down! CCP! Step down!” Xi, arguably China’s most dominant leader since Mao Zedong, was recently named to another term as head of the ruling Chinese Communist Party, and some expect him to try to stay in power for life.

The protester and another, who gave only his last name, Zhao, confirmed the chants. Both insisted on having their identities shielded because they fear arrest or retribution.

The atmosphere of the protest encouraged people to speak about topics considered taboo, including the 1989 Tiananmen Square massacre in which the ruling Communist Party had ordered troops to fire on pro-democracy student demonstrators, the unnamed protester said. Some also called for an official apology for the deaths in the fire in Urumqi in the Xinjiang region. One member of the Uyghur ethnic group that is native to Xinjiang and has been the target of a sweeping security crackdown shared his experiences of discrimination and police violence.

“Everyone thinks that Chinese people are afraid to come out and protest, that they don’t have any courage,” said the protester, who said it was his first time demonstrating. “Actually in my heart, I also thought this way. But then when I went there, I found that the environment was such that everyone was very brave.” 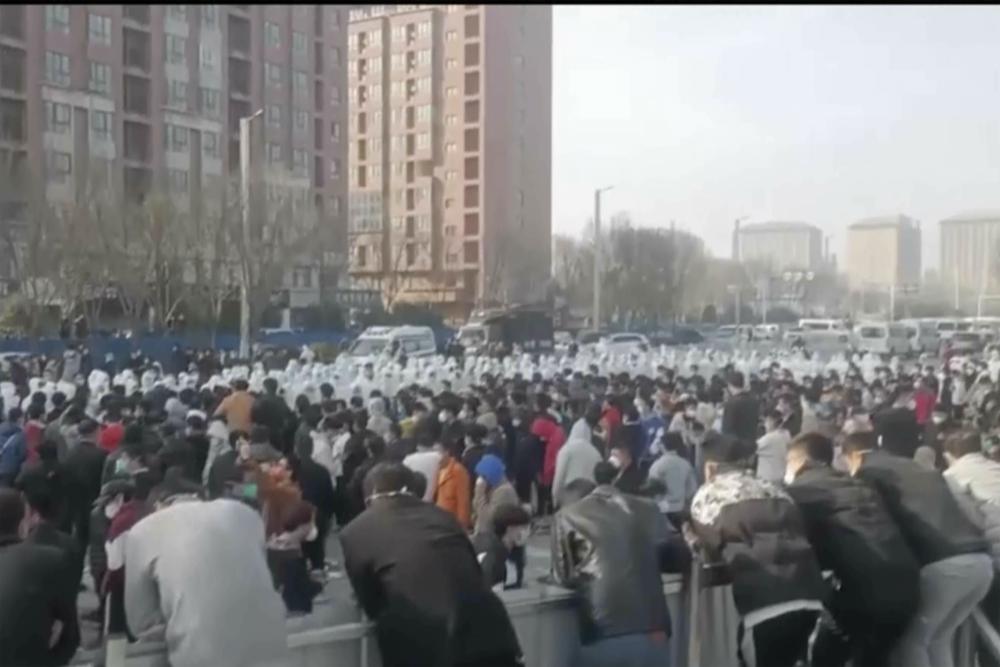 In this photo provided Nov 23, 2022, protesters face off against security personnel in white protective clothing at the factory compound operated by Foxconn Technology Group who runs the world’s biggest Apple iPhone factory in Zhengzhou in central China’s Henan province. (AP)

Initially peaceful, the scene turned violent in the early hours of Sunday. Hundreds of police surrounded the protesters and broke up the first more active group before they came for the second as they tried to move people off the main street. The protester said that he saw multiple people being taken away, forced by police into vans, but could not identify them.

The protester named Zhao said one of his friends was beaten by police and two were pepper sprayed. He said police stomped his feet as he tried to stop them from taking his friend away. He lost his shoes in the process, and left the protest barefoot.

Zhao said protesters yelled slogans, including one that has become a frequent rallying cry: “(We) do not want PCR (tests), but want freedom.”

On Sunday afternoon, crowds returned to the same spot and again railed against PCR tests. People stood and filmed as police started shoving at people.

A crowdsourced list on social media showed that there were also demonstrations at 50 universities. Videos posted on social media that said they were filmed in Nanjing in the east, Guangzhou in the south, Beijing in the north and at least five other cities showed protesters tussling with police in white protective suits or dismantling barricades used to seal off neighborhoods. The Associated Press could not independently verify all the protests. 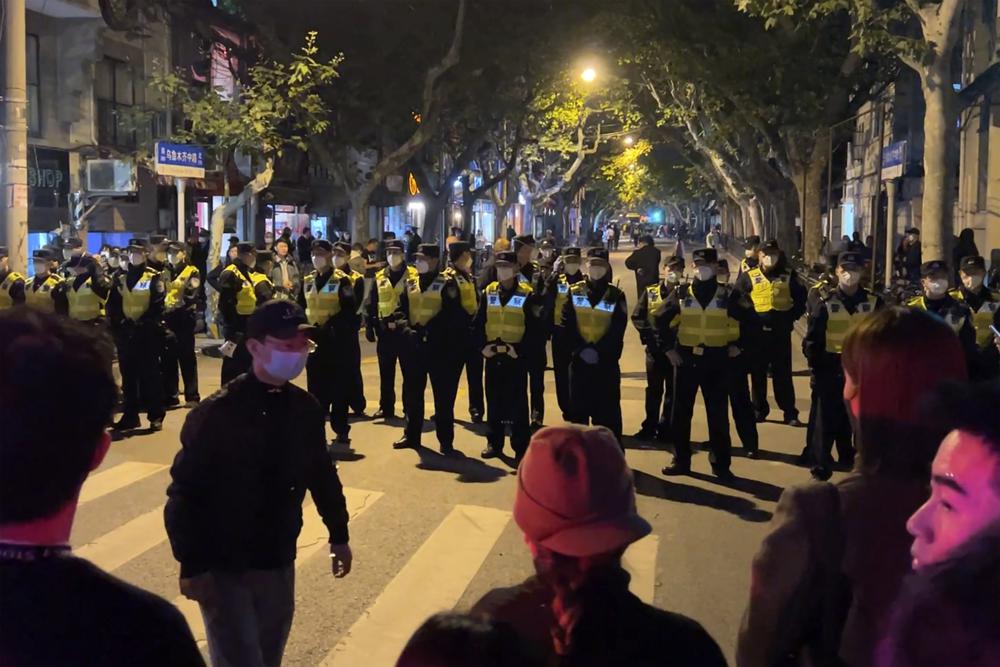 Chinese police officers block off access to a site where protesters had gathered in Shanghai on Sunday, Nov. 27, 2022. Protests against China’s strict “zero-COVID” policies resurfaced in Shanghai and Beijing on Sunday afternoon, continuing a round of demonstrations that have spread across the country since a deadly apartment fire in the northwestern city of Urumqi led to questions over such rigid anti-virus measures. (AP Photo)

In Beijing, students at the nation’s top college, Tsinghua University, held a demonstration Sunday afternoon in front of one of the school’s cafeterias. Three young women stood there initially with a simple message of condolence for the victims of the Urumqi apartment fire, according to a witness, who refused to be named out of fear of retribution, and images of the protest the AP has seen.

Students shouted “freedom of speech” and sang the Internationale, the socialist anthem. The deputy Communist Party secretary of the school arrived at the protest, promising to hold a schoolwide discussion.

Meanwhile, two cities in China’s northwest, where residents have been confined to their homes for up to four months, eased some anti-virus controls Sunday after public protests Friday.

Meanwhile, Urumqi, where the fire occurred, as well as the smaller city of Korla were preparing to reopen markets and other businesses in areas deemed at low risk of virus transmission and to restart bus, train and airline service, state media reported.