The thing that most bothers me about Barack Obama is his unearned narcissism. His smugness and arrogance are beyond the ability of science to measure. I don’t mind someone being a bit cocky or even arrogant, IF they have the accomplishments and achievements to back up the attitude.

Obama’s greatest achievement, though, is creating his own personal narrative. He is his own personal touchstone. Even when honoring a great American hero, Obama can’t help but thrust himself into the event.

On Friday, America and the world lost a true hero. Neil Armstrong, who died of heart complications at the age of 82, was the first human to walk on the moon. His steps onto the lunar surface were watched by the largest television audience in history. His statement “one giant leap for mankind” echoed throughout the world, allowing people everywhere to step back from the clutter of their daily lives and pause to dream big things. People who witnessed it will never forget it.

Armstrong’s heroism wasn’t the lunar walk, though. It was how he comported himself afterwards that showed the true measure of the man. He was among the more famous human beings in history. Yet he retired to a quiet and private life teaching aeronautical engineering and tending to his farm. His walk on the moon wasn’t a personal achievement, per se, but an accomplishment for all of humanity.

He made few public appearances. He gave very few speeches or interviews. His resignation from the public square made his lunar walk something mankind achieved rather than something Neil Armstrong achieved. His walk was the culmination of the work, not only of the thousands of engineers and scientists who directly worked on the mission, but also of the countless others throughout the ages who looked up at the skies and dreamed. Armstrong understood this.

How many of us could have resisted the siren song of global celebrity? How many of us would have chosen to withdraw and ensure the walk is remembered as mankind’s greatest triumph rather than a personal glory?

Obama took to his tumblr page to offer a tribute to Neil Armstrong. The words–two sentences–are fine in a generic politician way. But, Obama being Obama, he injected himself into the tribute. He included a photo, not of Armstrong or the iconic step onto the lunar surface, but of himself, gazing up at the moon. 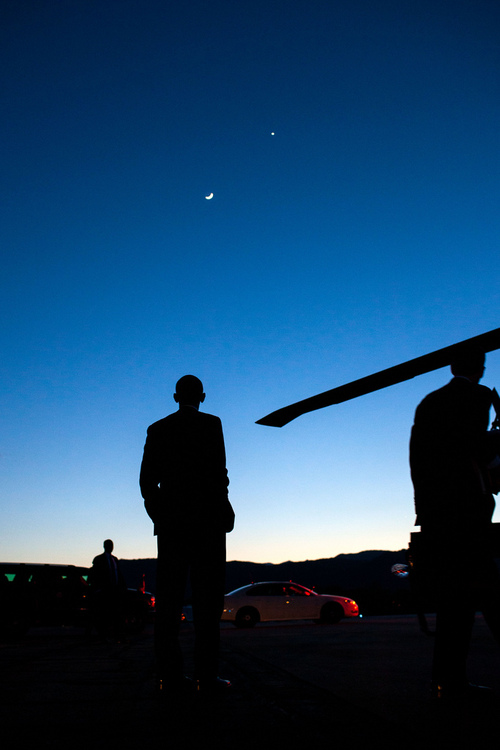 Obama is a literary construct. It’s as if Zelig jumped off the movie screen and took up residence in the Oval Office. He puts himself in the frame of historical events, even if he has only the smallest cameo. He let Democrats in Congress construct the stimulus package, as well as his signature legislation, Obamacare. He comes on the scene just in time for the photo-op, after others have done the heavy lifting.

Neil Armstrong did the heavy lifting. Even a tribute to his death is just another photo-op for Obama.