Today marks the beginning of the week-long ceremonies commemorating the 150th anniversary of the Battle of Gettysburg. There will be a full re-enactment of the battle, discussions with panels of historians, and of course a re-reading of the Gettysburg Address.

But as Lincoln affirmed when he dedicated that hallowed ground, nothing we say or do can “add or detract” from the great sacrifice made there. Gettysburg was a defining moment in the history of our nation; and consequently, one of the most important battles in the history of mankind.

I’ve had the honor of visiting Gettysburg twice, most recently during the One Nation Bus Tour in 2011.  I brought my family with me and we met other families–even meeting up with friends traveling from Wasilla–as we paid our respects to the monuments and patriot graves. It was important for me to bring the younger generation there in order to instill in them a sense of the duty we owe to the ordinary men who did extraordinary things to make us one nation.

On a sunny summer day there, despite the distance of a hundred and fifty years, you can somehow feel the “mystic chords of memory” binding us to that generation whose “hearts were touched with fire.” 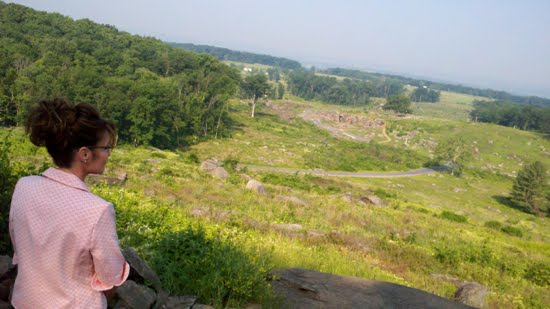 I felt it myself when I visited that day a few years ago. I felt it when I prayed at Little Round Top in gratitude to the unflinching courage of Joshua Lawrence Chamberlain and his men from Maine who held the line when the fate of the battle, and hence the nation, was at stake. I felt it when I looked out across the field where Pickett’s Charge took place and contemplated the doomed valor of those men of Old Virginia. I felt it when I stood at the High Water Mark, where Alonzo Cushing gave his life to repel the furthest advance of the Confederate cause and thus end the three-day battle.

Gettysburg is where we truly became one nation. It was the decisive battle of a war in which we righted the unfinished business of our founding by freeing those whose enslavement was our greatest shame.

We became one nation at Gettysburg not only because we preserved our union there, but also because in the decades following the war, veterans of the Blue and the Gray would come together on the anniversary of those fateful days to shake hands in brotherhood across the once bitter field of battle.

Lincoln’s words at Gettysburg were indeed prophetic. The men who “gave the last full measure of devotion” there did not die in vain. Our nation endures and our “government of the people, by the people, for the people” has not perished from the earth.

Breitbart News will be broadcasting the opening ceremony of the 150th anniversary of Gettysburg on Sunday from 4 p.m. to 10 p.m. EDT and partnering with N3 to offer 20 hours of coverage of the 150th anniversary of Gettysburg over the next eight days, which will include live reenactments and discussions with some of the leading Gettysburg historians and filmmakers. Breitbart News Sunday on Sirius XM Patriot Ch. 125 will also have a three-hour “Gettysburg 150” special tonight from 7 p.m. to 10 p.m. EDT. The broadcasts can be seen here.