Protesters in New York City plan to “shut down” 5th Avenue, a main shopping area in Manhattan, tonight. The call to do so happens after New York City Mayor Bill de Blasio asked for any protests to stop until both recently murdered NYPD officers Rafael Ramos and Wenjian Liu are buried this weekend.

According to reports, The Answer Coalition said it would go through with the march, which it says was planned long before Saturday night’s murders. They denounced the mayor for asking for a moratorium on protests, saying that would be an “outrageous” attempt to chill free speech.

Protesters are already being belligerent toward police after the murders. Some began yelling at law enforcement officers, who were paying their respects at a memorial to the fallen at the Brooklyn site of Saturday’s execution-style killing.

The New York Post  also reports that a dozen protesters did a “die-in” at Grand Central Terminal before marching toward Times Square.

“We will not let recent tragic moments derail this movement,” one protester shouted. “This is the revolution and we will not be repressed.”

At the same time, some New York law enforcement officers are asking that all Christmas lights be turned off tonight in New York City to pay respects to both Liu and Ramos.

Retired police officers are particularly concerned that protesters will try and crash the funerals of Ramos and Liu. According to one law enforcement source, retirees are saying, “It won’t be pretty,” if protesters try to ruin the funerals of the slain officers. 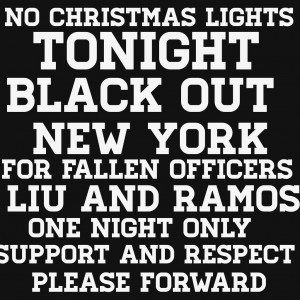