A new report from the Census bureau predicts that nearly one-fifth of America’s total population will be foreign-born in a mere 45 years.

In contrast, the native-born population, which includes children born to illegal aliens, will increase by 22 percent or 62 million. 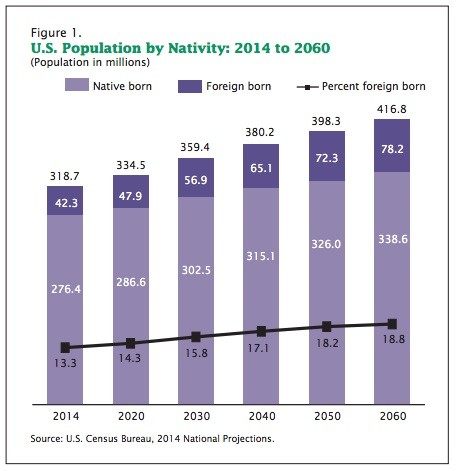 Non-Hispanic, native-born whites are the only racial and ethnic group expected to suffer a population decline. In 45 years’ time, their numbers will decline by 16 million, or eight percent, from 198 million to 182 million. They will make up only 44 percent of the nation’s population. The Census bureau points out that births of non-Hispanic, native-born white Americans will decrease by a predicted 23 percent. (Native American indians will suffer a similar decline in fertility of 20 percent.)

The Hispanic population, comprised of a variety of ethnicities from Central America to Mexico, will enjoy a population explosion of 55 million in 2014 to 119 million by 2060, and unless current immigration policies change, they will be 29 percent of the population present in the U.S. at that time. 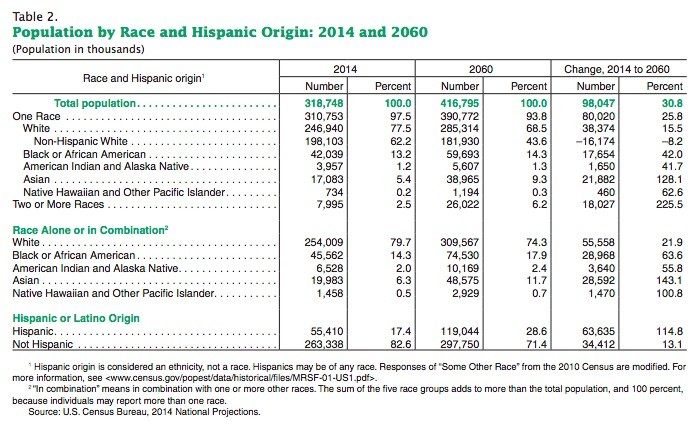 Notably, these dramatic demographic changes occurred in less than a century’s time, after the passage of the Immigration and Nationality Act of 1965.

Native-born Americans of every ethnicity are experiencing the ill effects of the massive social upheaval triggered by unnatural, politically-fueled demographic changes. While unemployment stands at 5.6 percent and outstanding student loan debt at over $1.2 trillion, both the Bush and Obama administration’s immigration policies have shut Americans out of the growing job market. Between 2000 and 2014, every new job created went to legal and illegal immigrant workers. Furthermore, for every new job created, two immigrants arrived in America: That’s 18 million foreign-born workers for 9.3 million American jobs. Within the next five years, Hispanic foreigners alone will take 75 percent of newly-created American jobs.

Despite the expected increase in what the Census bureau calls “diversity,” or government-imposed social variety, there’s little political talk of rescinding affirmative action policies in light of rapidly-changing demographics.

In fact, our government demands Americans celebrate this outcome. As President Barack Obama told foreign beneficiaries of his executive amnesty order, expect to see a President Rodriguez or a President Chen permit ever-increasing numbers of foreigners to arrive in America not to assimilate, but to fundamentally transform the country.