As the field of Republican presidential contenders expands each week, the challenge of how to conduct the primary debates becomes more complicated. The latest poll from Fox News illustrates this well, with many of the candidates clustered in the single digits, only one or two points apart. 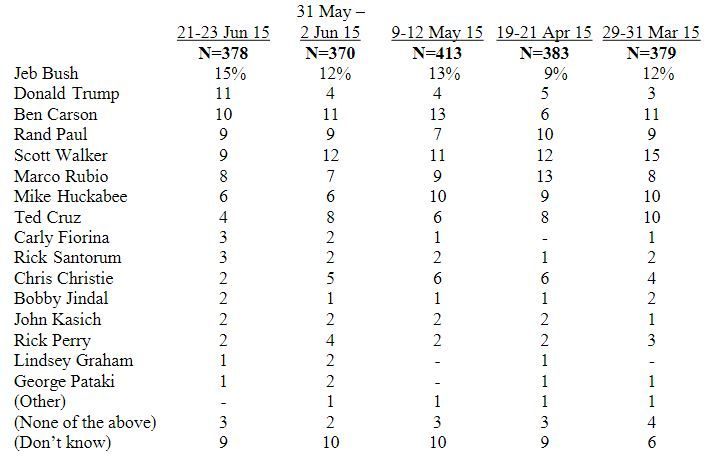 Looking just at these most recent numbers, if we are going to select the top ten candidates — the cutoff to participate in the debate under the current rules — we will end up with sixteen candidates who can legitimately claim to be in the “top ten,” due to the number of ties.

Factor in the margin of error, which is +/- 5 percent for the Republican sample, and the waters become even more muddied. A five-point margin of error for this poll means that it is not possible to say that any candidate is definitely ahead of the one below. In fact, for every candidate from Huckabee on down, it is impossible to say for certain who is ahead of whom out of that entire group.

Polls are a sample of an entire population, used to predict what the whole group would respond if you had the time and resources to question every single individual member. Here, the poll has a sample of 378 registered Republican primary voters that are being used to predict what the entire national sample of Republican voters would answer, if asked to cast their ballots today. (Note: the Fox News sample and margin of error are similar to those used by other recent polls, and we are not necessarily questioning the validity of the sample size or statistical methods used in this poll.)

The five-point margin of error in the Fox News poll means that if you repeated it many times with new randomized samples of this same population of nationwide Republican voters, the results could vary as much as five points higher or lower than what this poll showed. As mentioned above, the poll results for Huckabee and all the candidates ranked lower than his 6 percent all fall within the margin of error. This is the group most at risk for losing a spot on the debate stage, but the statistical data we have is far from precise.

It should be noted how few voters could significantly swing the results when the candidates are so close to each other. Out of a sample of 378 Republican voters, only 4 voters changing their minds about a candidate would move the results more than a percentage point (1 percent of 378 is 3.78, rounding up to the nearest whole person is 4). The difference between Rubio at 8 percent and Perry at 2 percent could be as few as 22 voters.

There are two additional problems with using national polls as a debate gatekeeper. First of all, at this point in the election cycle, the polls are still rapidly changing, as new candidates are still entering the race, most of them getting a post-announcement bump, as Trump is experiencing this week. Cruz had a temporary surge in the polls, but has steadily lost ground as more competitors threw their hats in the ring. Rubio similarly saw his numbers pop after his campaign launch, although his numbers seem to have settled in at a slightly higher position.

We are still waiting for Walker and Christie to enter the race. Walker seems likely to make the cutoff regardless of if he receives a post-announcement bounce or not, but Christie has consistently polled in the bottom tier. If he announces late, and receives a temporary uptick in his poll numbers, is it the right result for him to bump another candidate who might be a stronger contender? Christie’s viability is further complicated by the fact that he, along with Trump, have some of the highest unfavorability ratings with Republican voters, and some of the highest percentage of Republicans who say they would not vote for him.

With so much rapid change, the candidates switching positions in a very high stakes game of musical chairs with every poll, the critical question of who will make the debate stage could be affected by whether the last polls to be included are conducted on a Thursday through Saturday or a Friday through Sunday. Add in the uncertainty reflected by the margin of error, and telling any of these candidates they have not made the cut seems even harder to justify.

The other major problem underlying using national polls to determine debate eligibility is that this is not an accurate reflection of how the election will actually be conducted. There is no “national” presidential primary, but a series of primaries and caucuses, some of which are winner-take-all and a few that will divide their votes, taking place over several months.

Many have questioned the overwhelming influence granted to Iowa and New Hampshire, two small states that are not demographically representative of the nation as a whole, by virtue of their positions as the first in the presidential primary calendar. But that is the reality of how the 2016 election will be conducted.

The Republican Party is facing a critical test, selecting the candidate who will likely face Hillary Clinton in a very high stakes election. Using national poll numbers to winnow the field, and deny more than one-third of the candidates a spot on a national debate stage, is problematic. Factor in the uncertainty created by the closeness of the results and the margin of error, and it becomes all the more troublesome.