In a startling show of incivility, pro-abortion activists hurled abuse at participants in a pro-life rally in Dublin, shouting insults, giving the finger and holding signs such as “Fuck you, I’m pro-choice!”

Pro-abortion campaigners also hacked into the website of pro-life group “Youth Defense” prior to the march, replacing its usual homepage with a message reading #RepealThe8thAmendment, a reference to the passage in Irish law that recognizes the “right to life” of unborn children.

Meanwhile, tweeters compared demonstrators for the pro-life cause with members of ISIS and the Ku Klux Klan.

@DavQuinn why would anyone tolerate those who want to restrict freedom of women? It’s like calling for tolerance of the KKK or ISIS

The Irish Times reports that some 10,000 demonstrators showed up for the annual All-Ireland Rally for Life organized by a coalition of pro-life groups, while organizers put the number at 30,000. The rally was interrupted by a counter-demonstration by pro-abortion activists.

The activists assailed marchers representing Youth Defense, The Life Institute and Precious Life with chants of “Pro-life, that’s a lie, you don’t care if women die” and “Anti-women, anti-gay, pro-life bigots go away.”

The pro-choice crowd also criticized the sizable presence of children and young people among the demonstrators, saying it was inappropriate for them to be there.

“Obviously children shouldn’t be brought here,” said one pro-abortion activist. “They’re getting yelled at as well, they don’t understand what’s going on, they’re being upset.”

The mainstream media present avoided taking pictures of the more offensive materials, despite their abundance, but one independent photographer, Stephen McElligott, managed to get a couple shots of the activity, which he shared with Breitbart News. 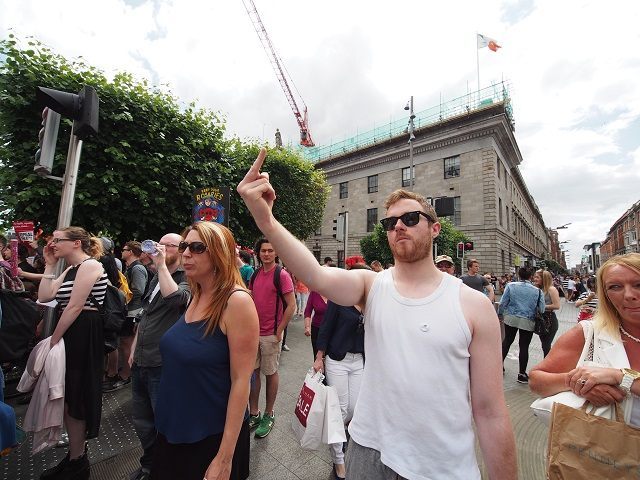 McElligott said that the pro-abortion contingent “was cursing and giving the finger to these little kids, shouting ‘Fuck you’ to passing families and getting up into their face. These are not a minority of the pro aborts,” he said. “These kind of insulting signs filled the sidewalk all the way down O’Connell Street.”

Another participant, Liam Foley, told Breitbart that he witnessed one of the pro-abortion people walk up to a young woman who was marching, and blow a shrieking tin whistle right into her ear. He also described how a bald-headed girl recovering from chemotherapy was fighting to hold back her tears as she was insulted and harassed by the activists. “I guess a child like that knows how cruel the world is better than most of us,” he said.

For people who advocate dismembering infants while still in their mothers’ wombs, however, terrorizing children in this fashion must seem like small potatoes.

As usual in these confrontations, the pro-life demonstrators did not counter with insults but marched peacefully, while several abortion activists entered into skirmishes with the police. One woman brandishing a pro-choice sign at the head of the anti-abortion march “was escorted to the side of the road before being forcefully shoved onto the curb by a member of An Garda Síochána,” the Times reported.

Niamh Uí Bhriain, the spokewoman for Rally for Life, criticized the behavior of the abortion campaigners for their use of hate speech.

“The rally is a celebration of life, I don’t know why these people feel they have to come and scream obscenities at… ordinary people who are marching for unborn children’s rights. Their behavior doesn’t do them any favors,” she said.

Among the pro-life slogans were messages criticizing Amnesty International after the organization called for the legalization of abortion procedures in Ireland last month.

“You have now outed yourself as not being concerned for human life at all, but as being a pro-abortion lobby group who is more concerned with the right to kill than you are with the right to life. Shame on you Amnesty,” said Eoghan De Faoite, chairman of the pro-life group Youth Defense.