Dr. Ben Carson deserves a “‘coon of the year’ award,” says a tweet from Anthea Butler, a University of Pennsylvania religious-studies professor and a frequent MSNBC guest.

Butler’s revealing invective was in response to a tweet from Daily Beast editor-at-large Goldie Taylor. That tweet highlighted a Sports Illustrated article in which Carson championed Americans’ right to fly flags — including the Confederate flag — that other Americans see as a symbol of hate. 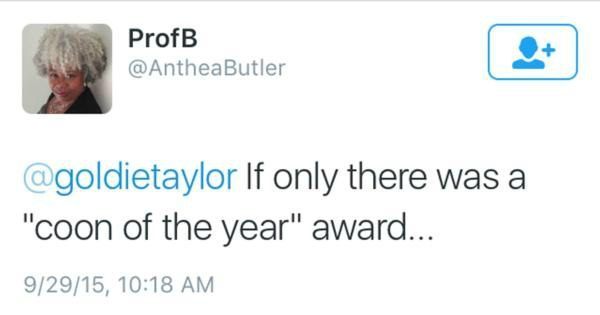 The Urban Dictionary website defines “coon” as a “Insulting term for a black person.” The site treats the insult as similar to other words that are rarely published outside rap lyrics.

Prof. Justin McDaniel, chairman of the University of Pennsylvania’s religious-studies program, did not repond to Butler’s tweet but said she is a “valued colleague and faculty member.”

As for Dr. Carson, his spokeswoman, Deana Bass, told the Washington Examiner that Butler’s tweet “does not merit a response.”